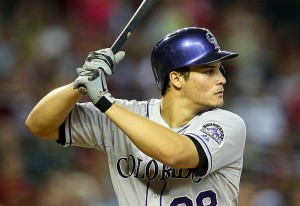 Arenado well represented on these leader boards this year. Photo via legitsports.com

Every year I have kept a spreadsheet with each year’s Gold Glove award winners and then shown how the leading advanced statistical measures listed out the best in the league.

In 2019, for the first time in a while, I think the selectors really did an excellent job picking the Gold Glove winners in each league.  Of the 18 winners, I think 15 of them were spot-on, inarguable selections.  And the 3 that I quibbled with each still led in some statistical categories, or were selected by the blue-ribbon Bill James-led panel of fielding Bible winners.  So you’d be hard pressed to even argue that those three were troublesome selections.  There’s no Derek Jeter esque selection (he won the Gold Glove in 2005 posting a -27 DRS figure) and no Rafael Palmeiro esque selections (he won the GG in 1999 playing just 28 games in the field and DHing the rest).  I feel like the selection committee is really getting good at picking the best defenders in the league.

I had quibbles with the following players (along with counter arguments):

Lets look at other fielding awards for 2019:

Every Fielding Bible recipient in 2019 also matched a Gold Glove winner; a first that I can remember.

Simmons seems like (as i said above) an award based on his reputation for years being the best defender in the league.  He’s not that anymore.  I’m not sure where the Freddie Freeman award came from; he did not lead any defensive measures in 2019.  The Aaron Judge award wasn’t too egregious; he led DRS in the AL, one of two primary defensive stats I like.

Fangraphs DEF stat (for a definition see here: https://library.fangraphs.com/defense/def/); it’s basically a combo state that tries to equate all players into one stat using positional adjustments.

So, 11 of the 16 GG winners are here, for about 70% match rate.  That’s not too bad.  A couple of the deltas we’ve already discussed (Ozuna and Bader).  Both SS figures resulted in different leaders here versus the GG winners, oddly.  But for the most part, this state predicted the GGs well.

This is one of my two go-to defensive stats; it does suffer from Short Sample Sizes so you really need a full season, but the range factor it measures does seem to tell a good story about how much ground the defender covers.  Its interesting to go through and look at certain players UZR/150 machinations; when Mike Trout and Bryce Harper were hurt, their UZRs plummeted accordingly.

this figure is often the go-to stat for people: I like using it in conjunction with UZR to tell a more complete picture.  DRS is context-sensitive; if you (for example) reach over the fence to save a grand slam … you get 4 defensive runs saved added to your total for the year (as opposed to the fact that you just made one out, albeit a tough one).  Its an accumulator stat … but its also worth noting that a player can accumulate a lot (or cost his team a lot) in a short amount of time.  So often times the DRS leaders don’t technically “qualify” by ABs or percentage of games played like other stats show.

DRS leaders include our own Robles, Josh Donaldson, Judge (in the only stat he led), and have some random players not present on any other stat.  So its kind of hard to depend on this stat for the purposes of saying, “So and so was the best defender at his position this year.”

This is B-R’s equivalent to Fangraphs total Defense stat … and its always had issues.  I’m not sure why.  but for 2019, in only was in line with the GG winers half the time, and was the only stat that had a number of players listed as the leader.  Its the least dependable advanced defensive stat of those listed here.

Baseball Prospectus FRAA: I gave up on it this year b/c BP has gone to a subscriber model, and you have to be a subscriber in order to get sortable stats on their page.

So that’s it.  Not sure if there’s much interest in this stuff but its something I track every eyar so I thought i’d post it.