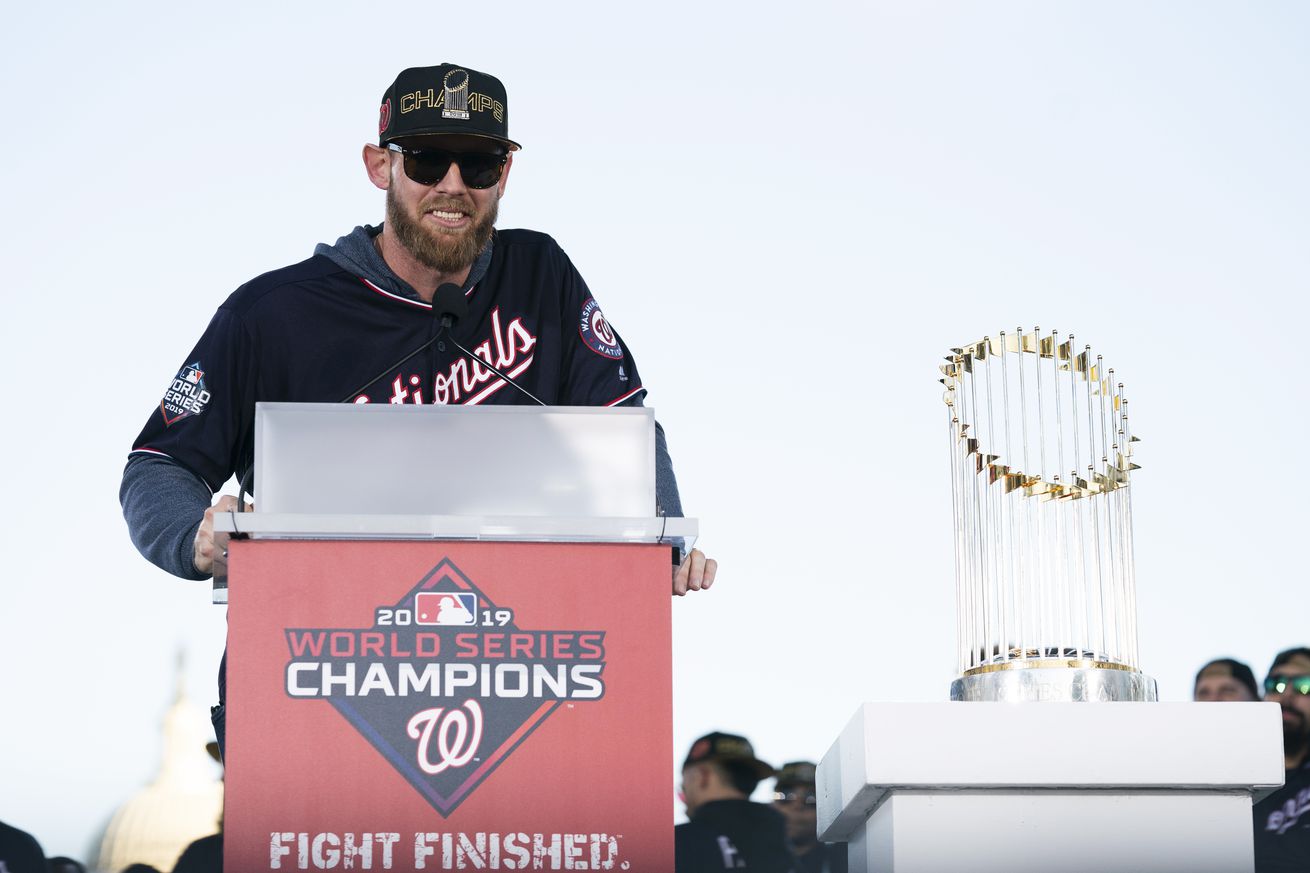 San Diego is where Stephen Strasburg was born, but Washington has become his home. After re-signing with the Nationals, he’ll be home for the rest of his career…

The dust is still settling after the Washington Nationals set the figurative Hot Stove ablaze by re-signing Stephen Strasburg on the first day of the MLB Winter Meetings in San Diego.

Ken Rosenthal of The Athletic reported early on Monday afternoon that the two sides were “making progress” on a deal. Things quickly picked up and before you knew it, the right-hander was signed, sealed, and delivered.

It turned out to be a record-breaking $245 million seven-year deal. That’s the highest average annual value ever for a pitcher, beating Zack Greinke’s $34.4 million AAV.

Sure, it was a bit more than many were expecting Strasburg to get this winter, but the end result is that the Nationals get their homegrown ace back as part of a dominant rotation.

“For me, it was an early Christmas present,” his manager Dave Martinez said on Monday.

“You look at our pitching staff now, and we’re solid. We have four quality starters.

“Stras, the year he had and just the whole, just watching his whole career, to think that he’s going to end it here with the team he started with is awesome for him and his family.”

With Strasburg, it always seemed a matter of when, not if, he would return to Washington.

GM Mike Rizzo has always put a focus on starting pitching, so re-signing the right-hander was always likely to be top priority this winter. Meanwhile, Strasburg clearly loves the organization and has always expressed his desire to stay with the franchise if possible.

“It wasn’t a question,” Martinez said of whether Strasburg’s return was ever in doubt. “I really felt that, if things go all right, that he’ll be back. I know he bought a house in D.C. For me, I felt like he wanted to stay, it was just a matter of logistics.”

As his skipper mentioned, Strasburg moved to the nation’s capital full-time last year after selling his house back in San Diego, where he previously lived during the offseason.

When Strasburg signed his first extension back in 2016 to extend his stay with the Nationals, comfort was a huge factor. Now that he lives in D.C., his comfort with the city was no doubt a huge factor in his decision to return after briefly testing the free agent market.

Yes, Strasburg was born in San Diego, but now he’s made Washington his home, embracing the city and its fans just as the city and the fans have embraced him as one of their own.

“I think some of the greatest players in the game,” Strasburg’s agent Scott Boras said on Monday, “they have the origins of where they’re raised and their home that they’ll never forget, and then they also have their baseball home.

“And I think winning this championship and the relationship with the Lerner family and with Mike and his staff, it’s been a continuum of communication, of really listening to the needs of players and really watching and trusting that they understood who Stephen Strasburg was so that they could reach both the pinnacle of both his performance and their objectives.”

Part of what has convinced Strasburg to stay with the organization was their willingness to go out of their way to protect him and treat him right.

Yes, get that 2012 shutdown klaxon at the ready, folks…

In all seriousness, the Nationals took a lot of heat for shutting down their prized pitcher at the time. But instead, they made sure to preserve him for future runs with the team, as well as ensuring that he wasn’t putting his long-term health in danger, even if it was elsewhere.

It’s paid off in multiple ways, with the preservation of Strasburg now coming back to not only help the Nats claim the World Series in 2019 but also helping lead to this long-term commitment.

“The patience required to do that and for ownership and the organization to go through something that, it took on a heavy burden,” Boras said.

“I just think that throughout this relationship Stephen has recognized that, and has now signed two contracts with them to continue his legacy with the franchise.”

Unlike the first extension, there are no opt-outs and there is a no-trade clause.

This deal, barring a completely unexpected, pitcher-approved trade at some point, will keep Strasburg with the Nationals all the way through his age-38 season.

It’s almost certain that he will only ever wear a Nats uniform in his major league career, something that will mean as much to Strasburg as it does the team and its fans.

He’ll now follow in similar footsteps to his idol and coach at San Diego State, the late Tony Gwynn, who did the same with the San Diego Padres, staying with one team his entire career.

“I must say that for Stephen, for him to establish a legacy and wear the curly-W for his career was something that was very important to him,” Boras explained.

“I think it was because he knew that people in this organization cared deeply about him and always cared about his interests and interests of his family.

“And because of that, he decided to stay at home and stay in one uniform and remain a Washington National for the remainder of his career.”

Some day, Strasburg will see his name in the Ring of Honor at Nationals Park, he’ll have his number 37 retired, and he has a chance to end up in Cooperstown with a curly-w on his plaque.

His legacy with the Nationals was already established before this extension. This contract is just the latest part of his journey with the team after an incredible first 10 years, culminating in a sensational World Series win as MVP of the Fall Classic.

Welcome home, Stephen Strasburg. Now it’s time to write the final chapters of your career, in the city that you made your own, as one of the all-time D.C. sports legends…