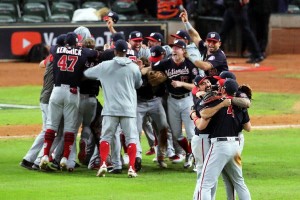 The new Nats #1 all -time game. Photo via nytimes.com

In the wake of the 2019 World Series run, I thought (while its fresh in everyone’s mind) it’d be a fun one to try to rank all the Nats post-season games.

I put in my top 10, then put in all the other candidates in chronological order.  For years I had a running list that conflated regular season exploits and post-season glory; now there’s so many games to consider just from 2019 that I’ve separated them in my (future) larger list of Best and Worst games.  As it turns out, I’ve got 8 of our top 10 post-season games now being from the 2019 run.

I’m putting the 2019 WC winner just below the Werth homer.  I realize this is not a popular take; I like the way that frequent commenter MarkL put it in a discussion just after the WC game:  “[the WC winner] excitement level is #2 after the Werth game but #1 in importance.”  I agree with that sentiment.  If the Soto hit had been a walk-off we wouldn’t be having this argument; it’d easily be #1.  But its ok for a non-clinching game to be considered great; consider that most pundits put Game 6 of the 1975 World Series (aka the “Fisk  homer”) as the greatest game of the last 50 years…. and it was won by a team that went out the next day and lost game 7.  It doesn’t matter in the end, since the Kendrick homer trumped them both, and then the WS winner trumped all.