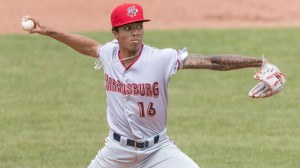 Is Sterling Sharp getting the call? Photo unk via talknats.com

Lets take a look at who is eligible, who might get protected and make some predictions.  I’ve got the Nats 40-man roster at 30 now (as of 11/6/19, after all FAs and opt outs), so there’s plenty of room to add names and do their off-season work.  But, this team also needs to sign a bunch of FAs.  But there’s a slew of options-challenged players who might get waived this off-season.  So it’ll be an interesting Rule-5 year, and an interesting off-season in terms of roster manipulation.

As always, using the indispensable Nationals resource sites Draft tracker (at its new location, now maintained by Luke Erickson) and the Big Board, and then looking up candidate acquisitions made via trade, here’s some thoughts on who might merit protection.   Also incredibly useful is Roster Resource’s Nats Roster, which keeps track of options, rule-5 status and the like.

The quick Rule-5 rules for 2019; any 4-year college-aged draftee from 2016 or before who isn’t already on the 40-man roster is Rule-5 eligible this coming off season, and any high-school aged draftee/International Free Agent from 2015 or before is newly eligible this year, assuming they were at least 18 as of June 5th of that year.  There’s always a couple of guys who have specific birthdays that move them up or down one way or the other; i’ll depend on the Roster Resource rules and the Draft Tracker for exact details.

One last thing: here was our 2019 AFL Roster (also here at milb.com’s site).  Often times teams put Rule-5 guys onto AFL rosters to get one last look at them against top quality performance to see if they’re worth protecting.  Of course, this practice also puts a huge spotlight onto those players for opposing teams and their scouts…

Its worth noting that the team already has added two guys from this class who likely would have been Rule-5 this year anyway: Tres Barrera and Jake Noll both would have otherwise been on this list.

So, two candidates from this group fo r me in Braymer and Sharp

The Nats generally don’t pick HS players, so the picking here is always slim.  But we’re down to just 8 players remaining in the system at all from the 2015 draft class, and none of them were HS draftees.

Zero candidates from this group.

Zero candidates from this group.

Rule-5 Eligible hold-overs of note: 2015 or prior college draftees still hanging out in the system, or 2014 and prior HS/IFAs.

These are 2013 or prior college draftees, or 2012 or prior HS draftees/IFA signings.

Post-2019 publishing, i’m adding a new section because  it seems like we’re going to see the following situation occur for the second time in recent memory.   Long time farmhand Mario Sanchez achieved minor league free agency at the end of the 2019 season, but apparently has been re-signed (his milb.com page lists the Nationals resigning him to a contract … but its dated in the future, 12/18/19, something i’ve never seen before).   But, if he’s re-signed as a MLFA with the team, then he has to be protected else he’d be subject to the draft.

This situation occurred a couple years back with Wander Suero, when the team selected his contract the day after the season ended upon his reaching MLFA status.

There’s a few other interesting newly-minted MLFA candidates who we’ve talked about in the past, but unless we have evidence the team re-signs them they’re not really candidates to discuss here.  Names like Drew Ward, Jordan Mills, etc.  Perhaps even Spencer Kieboom.  But like Suero and Sanchez, if you want to keep them, you’ve got to sign them to a ML deal.

One candidate from this group: Sanchez

So, who would I protect?

So, remember, if someone gets drafted they have to stick on someone else’s ACTIVE, 25-man (well, now 26-man) MLB roster the entirety of 2019.  So it has to be someone who could theoretically stick on a MLB roster.

Who would I additionally consider?

Here’s some other opinions in the Natmosphere on the same topic (i’ll add them as I see them):

By year, here’s who I predicted we’d add and who we did add.