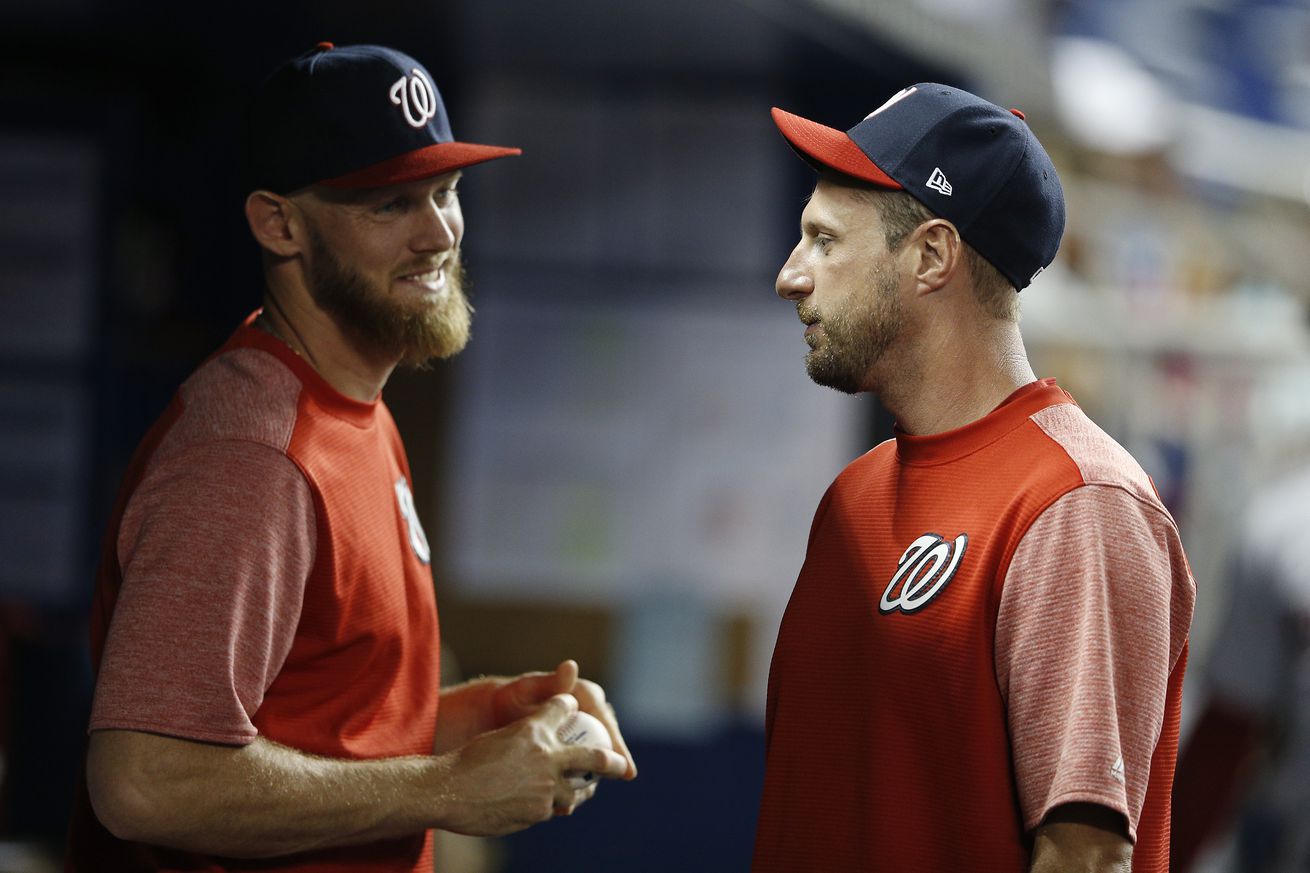 Stephen Strasburg talked during the press conference to announce his 7-year/$245M deal, about the influence of rotation-mate Max Scherzer.

Remember when Stephen Strasburg, who’d just given up eight hits, two walks, and six runs in 4 2⁄3 innings of work against Atlanta, and Max Scherzer, Washington’s ace, got into a bit of a heated exchange in the Nationals’ dugout in D.C. back in July of 2018?

It was, of course, all caught on camera, though they took the discussion into the tunnel that leads to the clubhouse fairly quickly.

In an interview shortly after the exchange, Strasburg declined to comment on the animated talk with his rotation mate.

“Just part of family, man, you’ve got to be in the family,” Strasburg said.

Asked if they’d talked again since the dispute, Strasburg told the reporter who asked he had no additional information to share.

“Those things are going to happen when you’re around each other for eight, nine months out of the year,” Nats’ manager Davey Martinez said at the Winter Meetings in San Diego, California earlier this month, when he was asked if that exchange affected the relationship between the two starters at the top of the rotation, who are now signed on for at least two more years together in the nation’s capital.

Strasburg tested the free agent market this winter, but returned to the Nats on a seven-year/$245M deal that will keep him with the only organization he’s known as a pro until 2026.

Martinez said that while things got heated that time, it was settled quickly, and he put more stick in what he saw from the pitchers during their run to the World Series championship, which saw Strasburg and Scherzer do whatever they could to help the Nationals stay alive and eventually win it all.

“What I saw after Game 6 and the game was over,” Martinez said, referring to Strasburg’s season-extending outing in the Nationals’ 7-2 win, “… Scherzer jumping up and down and giving Stras a huge hug and telling him how proud he was of him. He’s just awesome.

“That was really nice to see.”

The two starters, he noted, have distinctly different personalities, but they get along well.

“The big thing about Stras — one, they’re two different people, but they have so much appreciation for each other. They feed off each other. And they have this competition amongst themselves. [Patrick] Corbin included. [Aníbal] Sánchez included.

“So to have them back, for me … it’s an early Christmas present.

“I know the boys, his teammates are excited that he’s back. I’ve already gotten a bunch of text messages, and they’re all happy.

Scherzer was in Nationals Park on Tuesday for the press conference officially announcing Strasburg’s new contract.

“For him to be in free agency, when you win, this is where you want to be,” Scherzer said, as quoted by MASN’s Mark Zuckerman.

“You want to get the team back together and be a part of it. I’m just glad the ownership did that, went out there and got the deal done so he could be a Nat for life.”

Strasburg talked about the relationship that’s developed between himself and the three-time Cy Young award winner.

“Max coming in here with all the awards and the hardware, it was a little eye-opening for me, for sure,” Strasburg explained.

“I think he could say this too, I think our personalities are very different. I’m very quiet, but he goes out there, and he’s fearless. I think there’s certain times that I have a tendency to maybe like … not shy away from things, or shy away from certain hitters, but it’s like that aggressiveness that I watched over those years, that was something that, ‘Hey, I don’t really care what happens, but it’s like, as long as I’m aggressive that’s something that’s important to me.’”

Returning to a rotation that includes Scherzer, Corbin, and Sánchez again in 2020, with the fifth spot up in the air but likely to be filled by an in-house option like Erick Fedde, Joe Ross, or Austin Voth, definitely played a role in Strasburg’s decision to return home after seeing if other teams could convince him to move to a new city.

“I think we’re — all three of us, the things that we really enjoy about this game are the day in and day out grind, trying to perfect something that’s almost impossible to perfect,” he said.

“The craft that comes with pitching, I think that’s something that we all try to tap into all of the ability that we have and use it.

“For me it’s the simplest form, it’s not where you stack up in history or what your legacy is going to be, what they’re going to say in the record books, it’s really a matter of when everything is over, what will I wish I had done? And that’s something that’s always fueled the fire for me. The simplest things in the game of just going out there and throwing a certain pitch exactly where you want it, that’s what kind of makes me tick.”