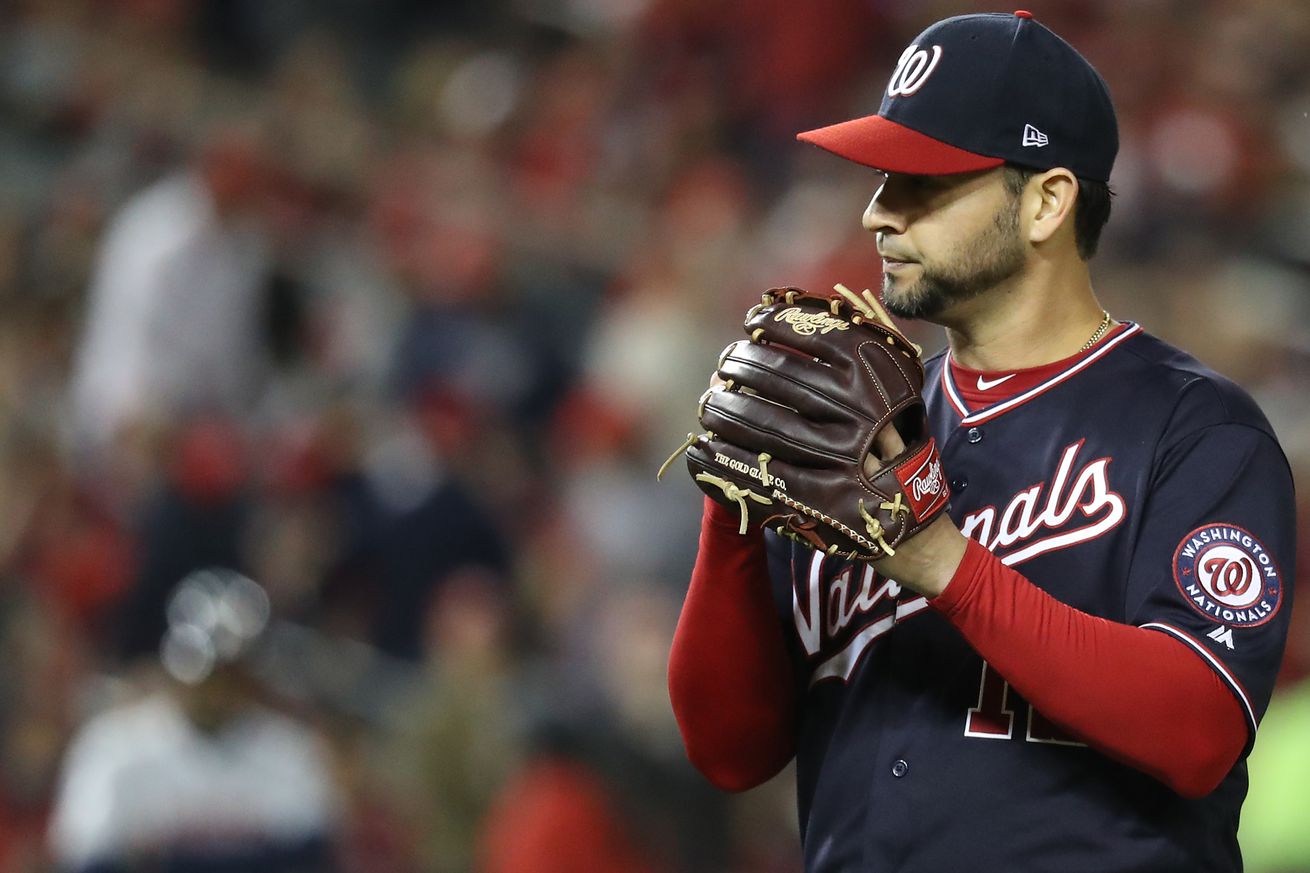 After a rough start to the first year of his 2-year deal with the Nationals, Aníbal Sánchez straightened things out and put together another solid season…

“Those years [weren’t] easy for me. Wasn’t a great moment,” Sánchez acknowledged, when he spoke with reporters in advance of his start in Game 3 of the Fall Classic with Houston’s Astros.

“But you know what, the result wasn’t there. And for me, I [was] just taking one more year last year, 2018. And they give me the opportunity to be here right now.

“So I remember I signed with the Twins and I got released, and after that I said, ‘Okay, whatever happens is going to happen, I’m not going to force anything.’

“I got an opportunity with the Braves and showed that I can still pitch on this level, and now I’m here.”

Sánchez’s success, and the fact that he found himself on the mound in the World Series as the 2019 campaign came to an end, was a blessing in the pitcher’s mind.

“Blessing. I feel really, really blessed. Thank God that I got this opportunity,” Sánchez said after he’d dominated in his two postseason starts before the World Series, with a 0.71 ERA, three walks, 14 Ks, and a .116/.208/.209 line against in 12 2⁄3 IP in outings against both the Dodgers and the Cardinals.

“Without him I don’t think that I [get] here,” Sánchez continued. “Yeah, it was tough moment of my career but most of the people think for me 2016 and ‘17 was tough for me.

“You carry for a year, so you see what the adjustment you have to make for getting better. But at the end, yeah, thank God that I got this opportunity right now.”

Asked what was different once he came off the Injured List, Sánchez said it was mainly the results, because he didn’t change too much in terms of how he was working on the mound.

“If you watch the whole game that happened early in the season when I was pitching,” the 35-year-old, 14-year veteran said, “everything was there. Everything was the same, until I came to the IL. Couple of errors, couple base hits, couple situations, couple running on base. Those little things change a lot. Like I remember that I lost four games, 2-0, 2-1, so those games. But I got like an injury with my leg.

“I remember I didn’t pitch for like 10, 12 days before my first game of the season. I got hit on the leg. A lot of things going on on the team early in the season for me to compete harder for the second half. But I didn’t do something like special, like I try to figure out what I had done before the IL and after. Everything was the same.”

Will the Nationals get more of the same from a 36-year-old Sánchez in 2020? Max Scherzer told reporters during the NLDS that his rotation-mate in Detroit and now in D.C. found ways to keep going late in his career.

“He’s the same guy on and off the field. He’s such a great clubhouse guy. He has so much fun with everybody,” Scherzer said. “What he can do on the mound, yeah, he’s a little bit different than when I played with him a few years ago, especially now he can cut the ball and what he can do with the location of that, that’s the biggest change in what he’s been able to do since I played with him in Detroit. But he’s always had the affinity to able to just change speeds on anything and he can change speeds on his changeup as well as anybody in the game. He’s just a treat to watch because of, he’s got a high intellect, a high baseball IQ of when to mix and match all of his pitches together, and when to change speeds and when not. So that’s the same Sanchie I’ve always played with.”

They’ll get at least one more run together in 2020, as the Nationals try to defend the World Series title in Sánchez’s 15th major league campaign.