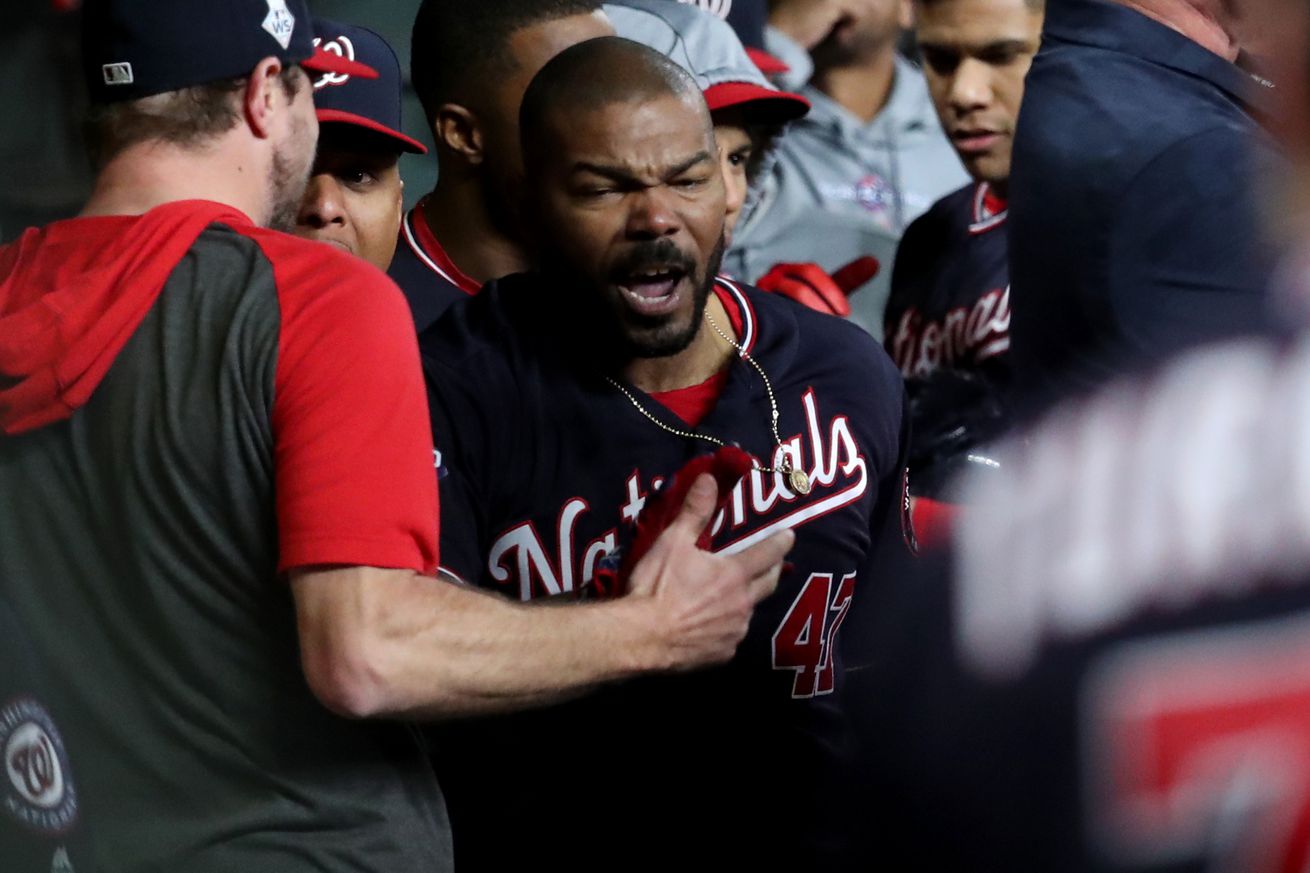 Kevin Long and Howie Kendrick have worked well together in their two seasons with the Nationals, and now they’ll get a third year in D.C.

“What was the biggest difference between 2018 to ‘19?” Washington Nationals’ Hitting Coach Kevin Long asked rhetorically in an interview with 660 WFAN’s Sweeny Murti in November.

“Not having Howie Kendrick,” Long said.

“He wasn’t around. He got hurt. And it’s overlooked a lot, but Howie Kendrick not being in that clubhouse made a huge difference.”

Kendrick suffered a ruptured right Achilles in May of 2018, and was out of action until this past Spring, when he returned, for a third season with the Nationals, and bounced all the way back.

The Nationals’ 36-year-old infielder also went 18 for 63 (.286/.328/.444) with four doubles and two home runs on the way to the Nationals’ World Series win, earning an NLCS MVP nod and hitting the go-ahead homer off Will Harris in the seventh inning of Game 7 of the Fall Classic with the Houston Astros, after he’d hit a go-ahead grand slam off Los Angeles’ Dodgers’ reliever Joe Kelly in extra innings in Game 5 of the NLDS.

“He’s the greatest ever,” Anthony Rendon told reporters who asked for his thoughts on the veteran during the NLCS. “I mean, you see the man. He’s what? 36 years old? And he’s still doing it. He’s built like a frickin’ cinderblock. He’s huge. Man, he stays short. He’s strong.

“So if he puts that barrel to it and stays behind the ball, you see it. He does damage. So he knows how to hit. That’s what he does.”

Rendon, of course, isn’t the only one in awe of Kendrick’s ability to barrel it up regularly.

“I have admired Howie Kendrick for years,” Long said last month, “… and it was the time when I was with the Yankees and he was with the Angels. I said, ‘Boy this guy can really, really, really hit.’ And it’s been an honor and a pleasure to be able to work with this guy.”

Kendrick told reporters during the World Series that he and Long hit it off from the start when they first met to work together in Arizona before the 2018 campaign.

“Kevin lives out in Phoenix, and I live in Phoenix,” Kendrick explained.

“It’s funny because the first time we met, I said to him, ‘Hey, what can I do to get better?’ He had a list. Like he had wrote down on a pad of paper. I wasn’t expecting it. This was the first time I had ever hit with him.

‘We got to work from there. Being here with Dusty [Baker], I always wanted to play with Dusty Baker when I came over here. I loved the city. I love being here. I love the team, and I re-signed for two years. Last year was bittersweet because I got off to a good start and ruptured my Achilles. Having the ability to come back this year and be a part of this team and to be with the guys in the locker room, that was huge. Me and Kevin and [Assistant Hitting Coach] Joe Dillon, we got to continue the process that we’d already started with my hitting, and I just trusted them and stuck with it. They just helped me get better at a time when I really needed to.”

Long has been equally impressed with what he’s seen from Kendrick up close the last two years, after admiring him from afar.

“He’s a leader,” Long said of Kendrick on WFAN.

“He’s the first one to the cages still to this day. I’m rushing to make sure that I’m there on time. He usually starts around 1:30, 1:45 every single day.

“And then he kind of sorts it out from there. And I tell him, ‘Okay, this is what you’re doing, this is what makes you really good, but you’re really crossing over and you’re cutting yourself off, so anything inside, you just have no room to work.’ And he hit the home run off Joe Kelly on a fastball on the inside part of the plate, and he hits it out to center, because that’s what he can do. He can stay inside the ball, but he’s got a lane to do it, and those are the adjustments that he’s made very late in his career that have helped him thrive. I saw something the other day that the last few years he’s got the highest batting average in baseball. Granted they’re limited at bats, but that’s where he’s at in his career. He can’t play every day. You can see a big difference after three or four days, he just doesn’t have the life in his body.

“But he’s another guy who — again, I can’t say enough about what he did to help our team.”

Kendrick will be back in D.C. hopefully helping the Nats in 2020, and potentially 2021, after reportedly signing on to a 1-year/$6.25M deal on Friday which includes a mutual option for the ‘21 campaign.