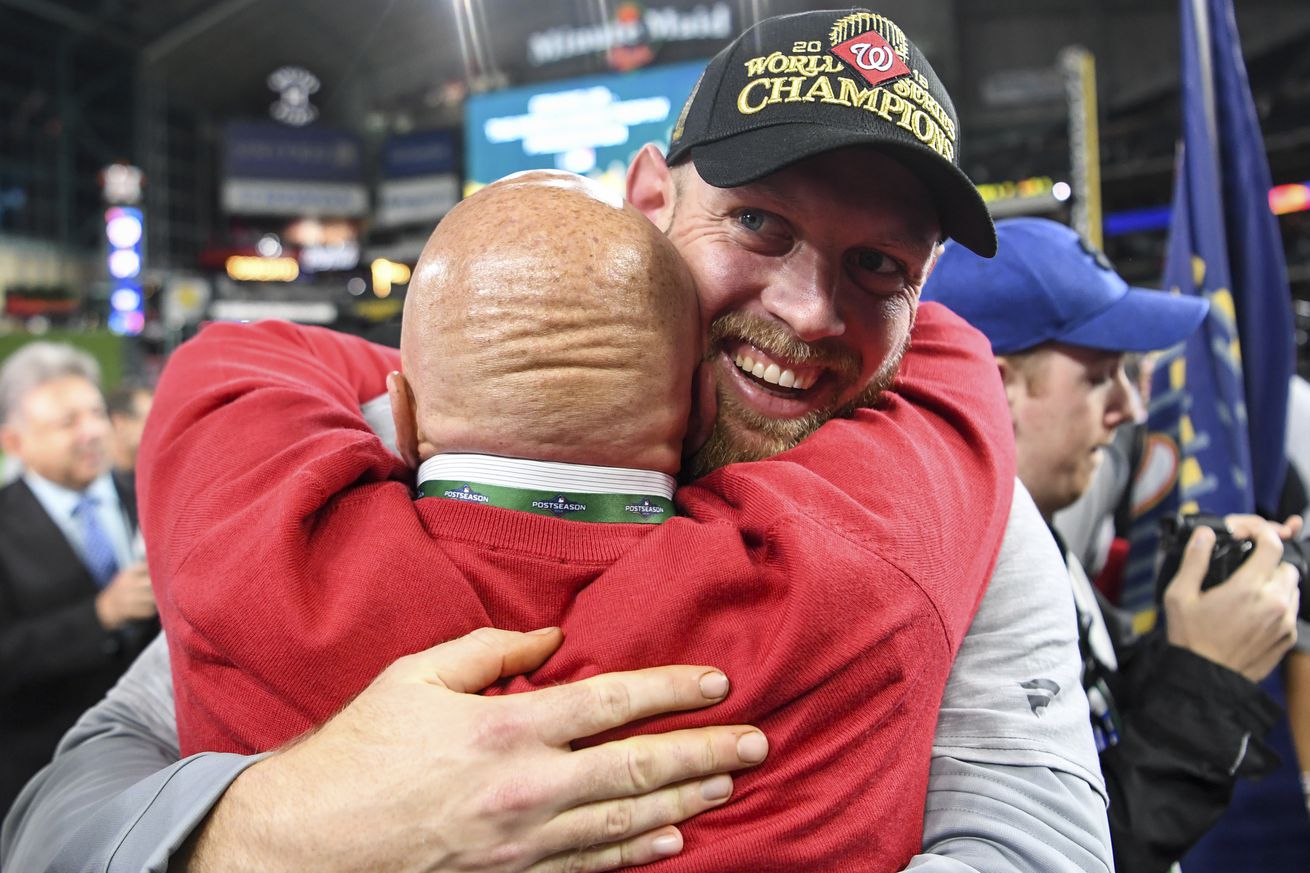 Stephen Strasburg talked this week about the decision to stay with the Nationals after testing the free agent market.

“The transformation of Stephen Strasburg from the pitcher that we drafted to the pitcher that was the World Series MVP is vast,” Washington Nationals’ General Manager Mike Rizzo told reporters in San Diego, California earlier this month, as he and Strasburg’s agent, Scott Boras, officially announced the 2009 No. 1 overall pick’s 7-year/$245M deal with the Nats at the Winter Meetings.

“You’re talking about a pitcher who’s revamped his diet,” Rizzo said, “… his workout regimen, his throwing program, his mechanics, his repertoire, his total being in the clubhouse and on the field. We think that he’s got extremely good stuff, and his pitch ability has gotten better and better and better each and every year.”

“I’ve said this for years,” Rizzo added, “… that, when he’s on the mound, he’s one of the top three or four pitchers in all of baseball. He always has been.”

Strasburg’s 33 starts this past season were the most he’s made since 2014 (when he made 34) and they were the second-most appearances in a season in his career.

The first of the two opt-outs included in the 7-year/$175M extension he signed with the club that drafted and developed him and helped him rehab from Tommy John surgery in 2011-12, ended up coming at a perfect time for the starter, who opted out of the deal, looked at his options, and ended up staying in D.C. after a brief foray into free agency.

“I think we all knew that Stephen had the capacity to be an elite performer, both because of his mental skills and physical skills,” Boras said when he was asked if the opt-out worked out as he’d hoped when they were included in the initial extension in 2016.

“And we also knew at the time he signed previously that he had not had enough experience in the major leagues to develop the secondary pitches — his breaking ball, his changeup — to the level he has today.

“I think all of us expected him to be a superstar, so for that reason, that contract worked out great.”

The transformation Rizzo described, and the adjustments, and improvements Strasburg has made over the years all led to a career-best run right when he had the opportunity to become a free agent for the first time after opting to forego the opportunity in May of 2016, months before he was set to hit the market that winter.

“It’s hard to really describe it,” Strasburg said of the maturation process when he spoke with reporters at the press conference to officially announce his new deal this week.

“Through experience you can learn a lot of things about yourself,” he added.

“There might be a coach there that tells you how handle certain situations, but until you do it yourself you don’t really know how you’re going to respond.

“I think when you’re kind of put in the fire, put in the middle of a storm, that’s when your true colors come out.

“I think you really just focus on what’s important, and for me baseball is a very important part, but at the end of the day it’s what type of person, what type of man I am, and that’s kind of the legacy I want to leave.”

The decision to return to the only organization he’s known as a professional, Strasburg said, had a lot to do with the environment in the nation’s capital.

“I like to think that baseball is a lot like life,” he said, “I would think that that’s what draws a lot of people to this game. It is a game based on failure, and I think that this team really proved that if you believe in one another and you keep fighting that you can really achieve things that most people thought were impossible. To be a part of that environment, it’s something that you want to hold onto and continue to be there.”

While he let his agent work with the team to get the new contract done this winter, the ten-year veteran said his focus has been on, “making adjustments and doing everything I can to be the best version of myself.”

“Having a great support system here is key,” Strasburg said.

“Having Max [Scherzer] here. Even Aníbal Sánchez, that we brought here. [Patrick] Corbin. [Pitching Coach] Paul Menhart. The group of people that I’m able to be around helps me achieve that and helps me focus on what I can do to continue to be successful.”

Was there a point, in the process which stretched from early November to mid-December, that he thought he might actually sign on somewhere else?

“Yeah, I think it’s pretty common. Again, it was more playing the, ‘What if?’ I really just tried to focus on hey, the season is over and I’ve got to get ready for next season. That was kind of my solace through this process. Luckily it didn’t last as long as other people, so I was able to kind of put it behind me and now fully prepare for Spring Training down there in West Palm Beach.”

“There were a lot of things at play,” he added at another point in the press conference.

“For me, I let my agent do all the communication there. I kind of tell him what I really desire at the end of the day, and once that’s explained it’s kind of — I trust in his ability to get it done.

“For me it was kind of just unwinding from the crazy season and focusing on getting ready for the next one.”