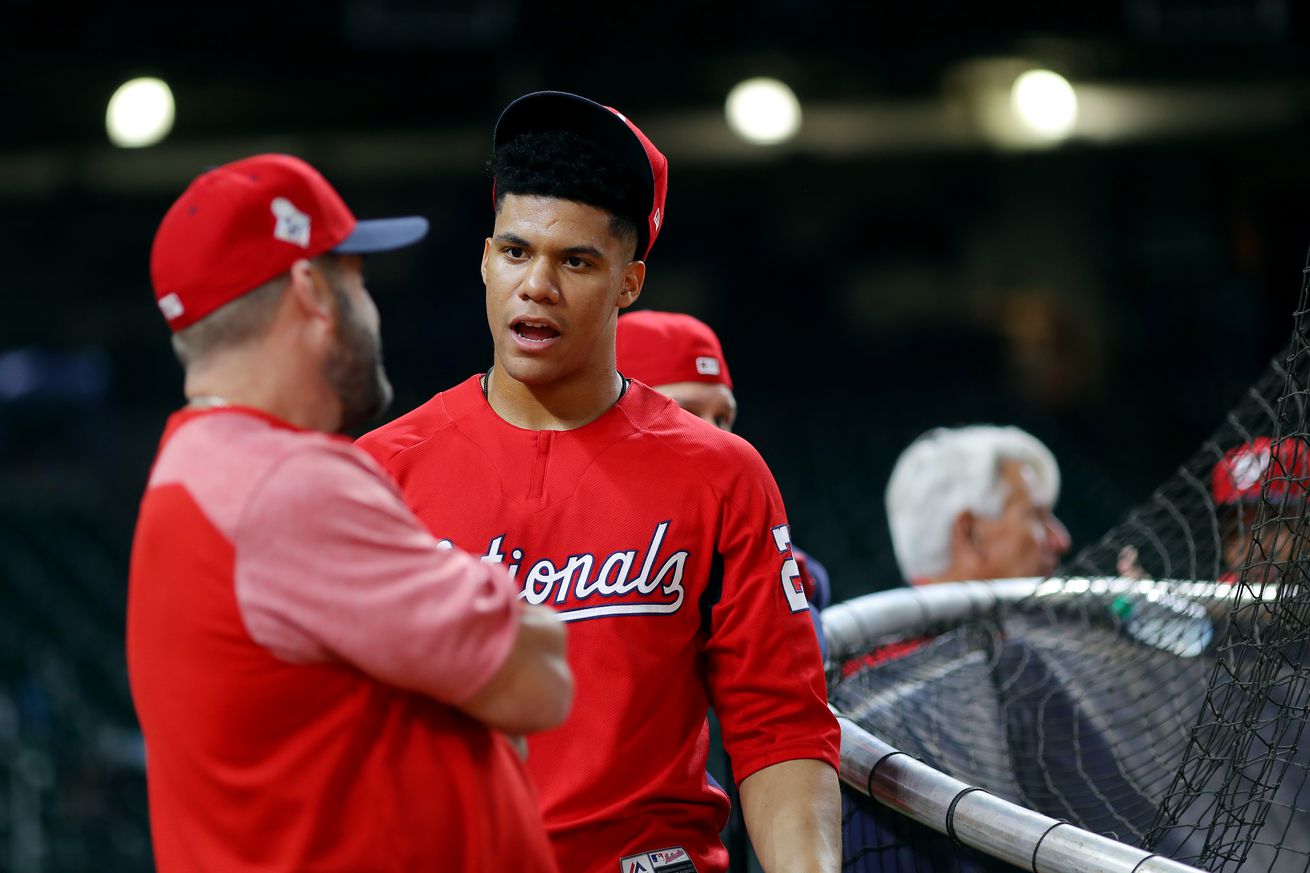 Kevin Long talked to 660 WFAN in NY’s Sweeny Murti about a number of things, among them Juan Soto and his swing…

Houston Astros’ manager A.J. Hinch got an up-close look at Juan Soto during Game 1 of the 2019 World Series, with the Washington Nationals’ 21-year-old outfielder going 3 for 4 at the plate, with a double, a walk, and a home run in the opener of the 115th Fall Classic in Minute Maid Park.

“We haven’t seen him a ton in person,” Hinch told reporters after the Astros’ 5-4 loss.

“A little bit of Spring Training, which doesn’t count. But he was clearly the key guy that we couldn’t control tonight. His bat speed is electric. His energy and his body is as advertised. He’s calm in the moment. Clearly this is not too big a stage for him.”

“He was the difference in the game,” Hinch added.

On the biggest stage in baseball, Soto ended up 9 for 27 (.333/.438/.741) with two doubles, three home runs, five walks, and eight Ks in seven games and 32 plate appearances overall as the Nationals won it all.

As impressive as he’s been at the plate (and increasingly in left field), second-year Nationals’ hitting coach Kevin Long said, in an interview with WFAN Sports Radio’s Sweeny Murti, Soto is even more impressive a person.

“I’m amazed at the things this guy can do,” Long explained. “I think it’s the kid, No. 1, the kid is so special, just a great human being. You know, people used to talk — I remember Jim Leyland talked about Curtis Granderson, how he’d want him to marry his daughter. That’s the way I feel about Juan Soto.

“My wife was staying at a hotel and she was looking for a package and it wasn’t there, and there was a big crowd around her and she was kind of making a scene. Juan Soto walks over, he taps her on the shoulder, and he says, ‘Mrs. Long, is everything okay? Is there anything I can do to help?’ Now this is a young man who — he’s from the Dominican, he is really, really young. He sees my wife, who he knows, and he’s just going over to check on her. Just to make sure. I’m already at the field, I’ve been at the field forever, and it was just one of those things where she had talked to me about it and I had said… that means a lot to me.

“Now that’s not even talking about the talent on the field. The strike zone discipline at 20, the power to the opposite field that he has, the ability to make adjustments, the two-strike approach, it goes on and on. The swing? The mechanics of the swing, are — I’m telling you Sweeny, they’re almost flawless.

“How he improved in left field, no one even talks about that. This guy was up for a Gold Glove, he almost could have won it. And that part of it if really special as well. Needless to say the talent is off the charts, but the kid is really what sticks out to me.”

That’s just one great anecdote from Long in the interview. It’s well worth a listen while you, hopefully, enjoy a day off of work…

Long talks about Howie Kendrick’s swing. Holding back some when it comes to Trea Turner. How Anthony Rendon doesn’t really want too much of the available data, and more…

LISTEN TO THE FULL INTERVIEW HERE: