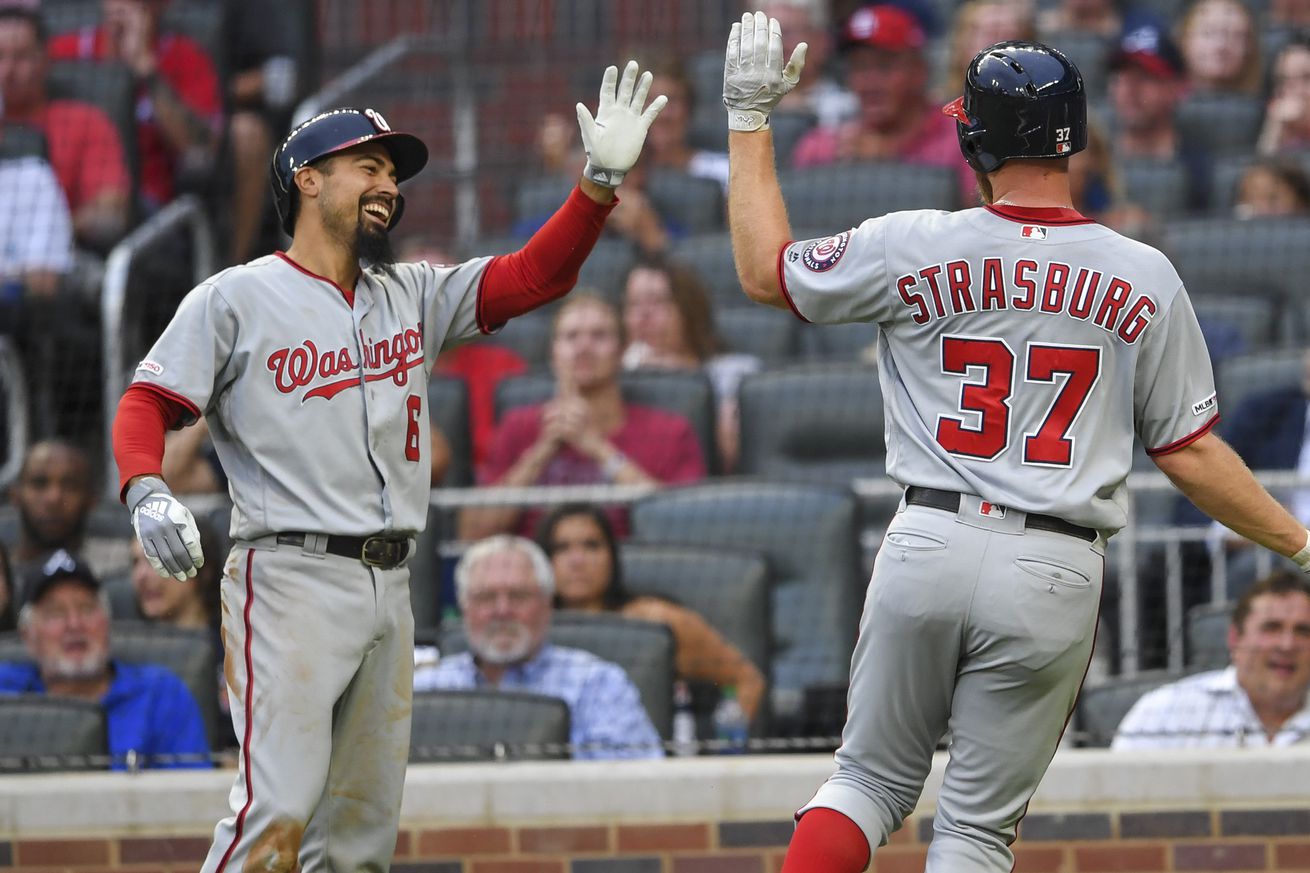 Anthony Rendon met with the Texas Rangers in Houston, TX over the weekend, according to a report by Dallas Morning News’ writer Evan Grant, and the 29-year-old free agent also reportedly talked to the Los Angeles Dodgers.

Stephen Strasburg is reportedly meeting with the New York Yankees in Los Angeles today, “according to two people with knowledge of the situation,” who spoke with the LA Times’ writer Jorge Castillo, and confirmed that Rendon met with the Dodgers.

While GM Mike Rizzo and Co. in the Washington Nationals’ front office, at least publicly, are saying they’re still interested in reuniting with both Rendon and Strasburg, Rizzo said at the premiere for the Nats’ World Series movie this week that he didn’t think face-to-face meet-ups with the free agents were necessary given their extended history with the players, both of whom are first round picks by the Nationals who’ve been in the organization since 2009 and 2011, respectively.

Multiple reports maintain that the Nationals are more confident in their ability to bring their World Series MVP back, with several writers today noting that Strasburg remains more of a possibility for the defending champions in their mind.

There is some chatter out there that the Nats could turn to Josh Donaldson (who, MLBTR projects, will get a 3-year/$75M deal in free agency) if they don’t think Rendon is coming back.

The Nationals, you’ll recall, reportedly made a 7-year/$210-$215M offer to Rendon back in September.

Any names you think the Nationals should target (in free agency or trade) if Rendon signs elsewhere or the cost for Donaldson proves prohibitive?

There is still plenty of talk about how long the Rizzo and the Nationals may be willing to wait for an answer before moving on from Rendon or Strasburg as possibilities.

Patience is a virtue…

Unless you’re the Nationals trying to find a third baseman. @StevePhillipsGM | #Nationals pic.twitter.com/BSWOgqIAU8

Rizzo himself told USA TODAY’s Bob Nightengale earlier this winter that they’ll need to know which way things are going sooner than later so they’re not left hanging as they try to check things off their offseason to-do list.

“It’s a two-way street,” the GM said. “They earned the right to be free agents and look at other teams, but you can’t be held hostage by any player.’’

While an unfortunate turn of phrase, it’s an honest assessment of the situation that the Nats find themselves in this winter as they try to build for the defense of the World Series crown.

If you’re not following all the latest chatter on Twitter, we’ve collected it all above and below to keep you up to date…

Yankees are meeting with Stephen Strasburg today. They like him too (of course) but if they believe Cole may prefer LA they are really concerned Straburg prefers to stay in DC. Indeed, Nats, have seemed somewhat confident about Strasburg, relative to Rendon anyway.

Phillies are looking at Stephen Strasburg. They just saw old friend Cole Hamels go to rival Braves but expect them to work hard to improve rotation. Phils also in on Wheeler, as noted, plus others. Also linked to SS: WAS, NYY, LAD, SD. Incumbent Nats seen as favorites for now.

The Atlanta #Braves certainly got huge dividends on a one-year deal on Josh Donaldson. Now, they hope they get an encore with Cole Hamels. They still are in the running for Donaldson who’s also being heavily pursued by the #Nats.