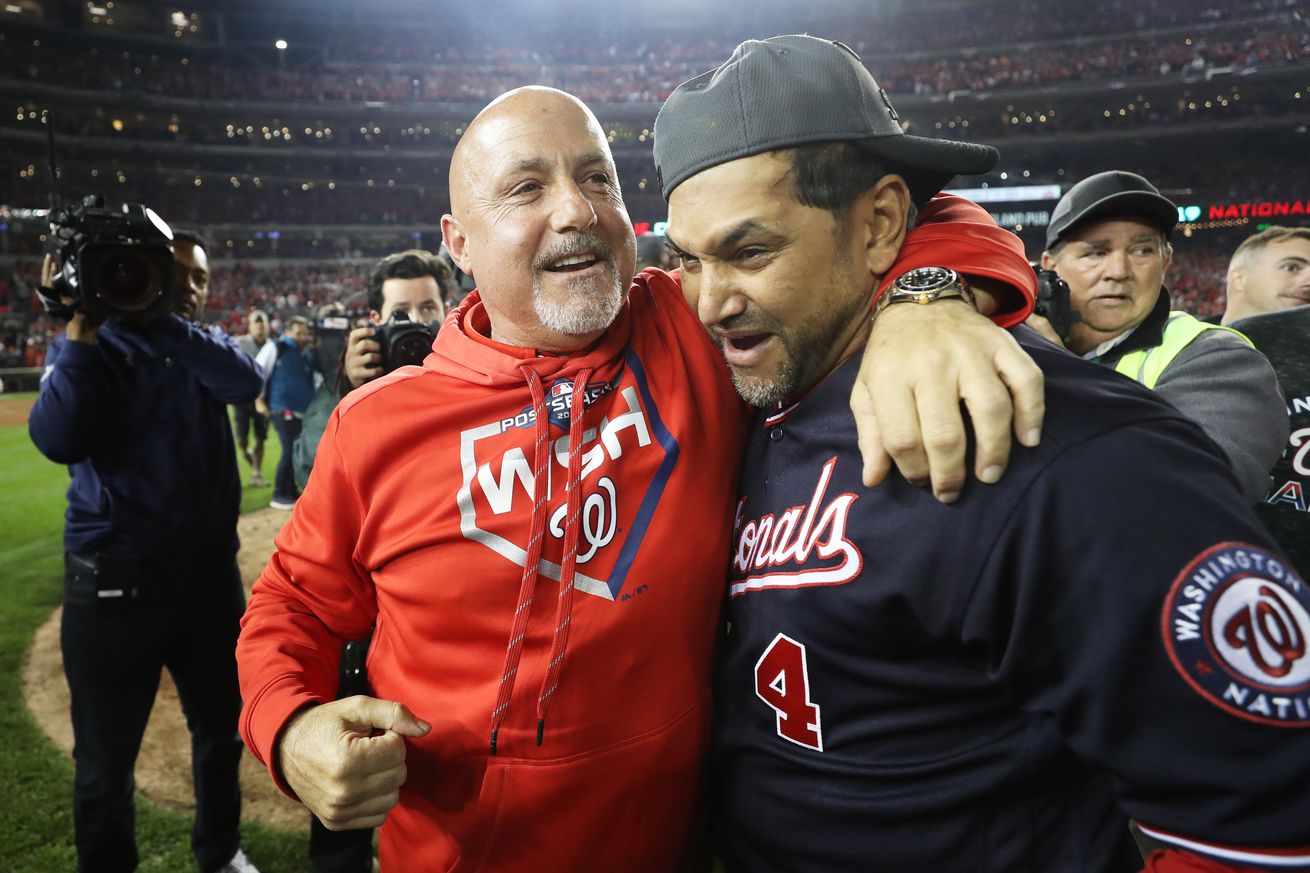 Ken Rosenthal was on the MLB Network recently breaking down the Washington Nationals’ offseason and all of the problems they’re trying to solve.

For a quick, three-minute spot on the MLB Network, Ken Rosenthal sure packed a lot of talk about the defending World Series champion Washington Nationals (that’s fun to say) into it.

It did start, obviously, with talk about the two prominent free agents that GM Mike Rizzo and Co. still, at least publicly, hope will return: Stephen Strasburg, who opted out of the final four years and $100M of the 7-year/$175M extension he signed in 2016 to test free agency after a World Series MVP-worthy postseason and a solid, healthy, 2019 season, and Anthony Rendon, who talked extension with the Nationals periodically over the last few years, but didn’t reach an agreement before hitting the market.

Rizzo is on record saying he still wants both back, but stressing in separate interviews that you can’t build a roster based on nostalgia, or be held up waiting for players to make their own decisions when there are moves to be made.

MLB Network’s Jon Heyman wrote on Twitter that the Nationals would like to have “quick resolutions” with Strasburg and Rendon so that they can move on to “contingency plans” should either or both decide to sign elsewhere.

Heyman also noted that it, “[f]eels like [the Nationals] are slightly more confident in [the] Strasburg case.”

“The whole thing hinges on the Strasburg-Rendon equation.” @Ken_Rosenthal puts on his GM hat and looks at the @Nationals. #MLBNHotStove pic.twitter.com/8hBLoe8pGQ

“Let’s start with the Strasburg/Rendon situation,” Rosenthal explained in the MLB Network spot, “… because the people with the Nationals seem to believe — and things can change — they seem to think that they have a better shot at Strasburg than Rendon.

“So, let’s assume that’s correct, and let’s say, okay, they keep Stephen Strasburg, keep the great rotation together with Strasburg, [Max] Scherzer, and [Patrick] Corbin at the top…”

But, and this is a big but, there are plenty of other spots on the roster you need to address once you’ve got the rotation, with or without Strasburg, settled, and…

“From there where do you go?” Rosenthal asked. “Well, if you’re not keeping Rendon, you’re going to have to address third base, there’s no question about that, on the right side of the infield they also have questions, but they can re-sign Ryan Zimmerman at a reduced rate to play first, they can go with the kid Carter Kieboom at second, so those two positions are addressed, but even after all that, even if you’ve got Strasburg, even if you’ve got a third baseman, let’s say it’s Josh Donaldson, let’s say it’s Mike Moustakas, someone else, you still have to address the bullpen. [Daniel] Hudson is a free agent. [Fernando] Rodney is a free agent. And let’s face it, their bullpen was a weakness all season long. They probably need two relievers, maybe even three. So there is, in the words of Chris Russo, a lot of work to do. But they have the means to do it, and depending on how this all shakes out, they could be okay.”

Ryan Zimmerman’s option for 2020 (at $18M) was, predictably, declined, though both sides have expressed an interest in continuing their 15-year working relationship. Sean Doolittle’s option (for $6.5M) was picked up after the season ended. Matt Adams, who’s split time with Zimmerman at first in the last two seasons, had a $4M option declined as well, so they have to essentially sign two first basemen unless they’re higher on someone in the organization’s ability to step in than anyone else out there is right now, since Howie Kendrick and Asdrúbal Cabrera (who saw limited time at first after he signed) are both free agents now too.

Doolittle, Tanner Rainey, Wander Suero, Roenis Elías, Hunter Strickland, Wander Suero, and pitchers like Aaron Barrett, James Bourque, Ben Braymer, Kyle McGowin, and others who are on the 40-Man roster or in the system, give the Nationals and manager Davey Martinez options, but, as Rosenthal said, the Nats’ bullpen’s big issues in 2019 warranted significant changes throughout the season and will likely be one of the things the Nats’ front office is focused on this winter.

“Now remember, too,” Rosenthal continued, “they also need a catcher,” after declining the $9M club option for Yan Gomes in 2020, which leaves them with Kurt Suzuki and a number of unproven options behind the plate, “and they’re also coming off a World Series title, and we’ve seen in recent years that there are unique challenges associated with just coming back and trying to do it again.”

“Strasburg, for instance,” he said, “threw 245 (1/3) innings last year, including postseason. He’s coming off the biggest workload of his career.

“Scherzer, of course, went really deep was well, and was physically compromised at the end of the year, so they have a lot of concerns.

“But the whole thing hinges on the Strasburg/Rendon equation.”

But don’t underestimate the difficulty of bouncing back from the heavy workload, the long season, and the quick turnaround in a shorter-than-usual offseason Rosenthal referenced.

How do they guard against the so-called (and real) threat of a World Series hangover?

“There hasn’t been a team yet to come up with a great answer for this,” Rosenthal said.

“This is going to be something the Nationals have to confront and keep in mind. If they don’t keep Strasburg, let’s say at some point they say, ‘We cannot wait any longer, we need to address this, and they go get a Madison Bumgarner or Zack Wheeler or someone else, maybe even they jump into the Gerrit Cole sweepstakes, then it’s a little bit of a different story, because that’s one starter coming in who — well except if it’s Cole — did not have that great postseason workload.”

Going back into it with a significantly altered rotation, lineup, bench, and bullpen, obviously makes it all the more difficult as well, as they try to find another mix of players that can work together like the 2019 Nationals did.

“One way to do it is to bring in a new set of players and get fresh energy, but that has its problems too,” Rosenthal suggested, “because the players that they had worked so well together. That was the classic example of a team, and because of the way baseball is, and the way all sports are, that team cannot stay together.”

After he put together a roster that started 19-31, worked its way into the Wild Card Game, and shocked the baseball world by winning it all… In Rizzo We Trust?