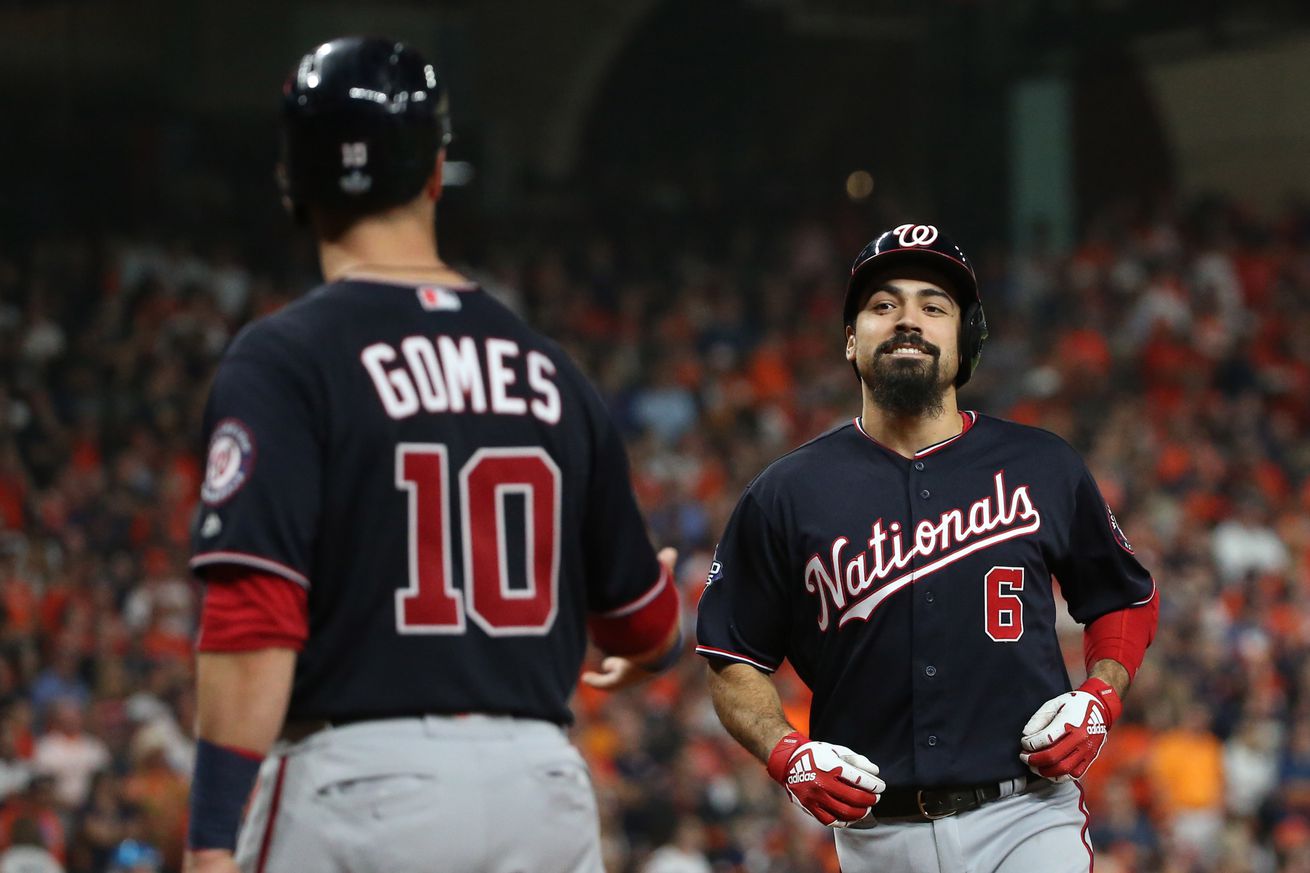 Catch up on the last weekend in Washington Nationals news before today’s deadline to tender contracts to the arbitration-eligible players on the roster.

Today’s 8:00 PM deadline to tender contracts to arbitration-eligible players could provide us with some actual news about the Washington Nationals. Wilmer Difo got a 1-year/$1M deal done last night, according to multiple reports. There’s a report this morning about a potential issue Anthony Rendon’s side had with the initial offer from the Nats. Guess who wasn’t fond of deferred money … reportedly?

Nationals face several decisions at non-tender deadline – (MASN)
“It’s non-tender day across Major League Baseball, a day when a handful of players from each club worry they might get dumped but in most cases survive to live another day.”

Nationals sign Wilmer Difo to a one-year, $1 million deal, giving him one more chance to stick – (WaPost)
“The Washington Nationals first signed Wilmer Difo near the start of this decade, and a month before it ends, they’re giving him what looks like one final shot.”

Nats sign Difo for $1 million, avoiding arbitration – (MASN)
“Difo actually spent most of 2019 at Triple-A Fresno, demoted in mid-May after struggling while starting at shortstop in place of the injured Trea Turner.”

After erratic season, Wander Suero needs to find formula for consistency – (MASN)
“Who was the only member of the Nationals’ opening day bullpen to remain on the active roster the entire season?”

Michael Taylor, Hunter Strickland among Nationals’ non-tender candidates to retain for 2020 – (NBC Sports Washington)
“Mike Rizzo and Co. don’t figure to stay idle for too long, but they will be forced to make several roster decisions by Monday.”

Intriguing Austin Voth has thrust himself into mix for 2020 rotation spot – (MASN)
“Summoned from Triple-A Fresno for an emergency June 23 start against the Braves, Voth immediately flashed a more impressive repertoire than he displayed the previous year.”

Hard-throwing Tanner Rainey showed potential to pitch late innings – (MASN)
“Though his numbers at Triple-A Fresno weren’t all that impressive, the Nationals were desperate for bullpen help in mid-May, so they took a chance on Rainey…”

Ranking each World Series champ since 2000 – (MLB.com)
“10) 2019 Washington Nationals – Yes, sure, they were a Wild Card team. But that was mostly because of a wretched start.”

What we know — and don’t — about free agency – (MLB.com)
“But with Gerrit Cole and Stephen Strasburg — the top two free-agent starters on the board — both represented by Scott Boras, there is, unsurprisingly, little traction in this market overall.”

Andrew Lee Sees The Bullpen As His Future – (Baseball America)
“An 11th-round pick out of Tennessee in 2015, Lee is a good athlete who was a strong lefthanded hitter and a closer for the Volunteers. He throws a 92-95 mph fastball, a curveball, a changeup and an occasional cutter.”

Lefty Ben Braymer joined the #Nationals‘ 40-man roster. Then he joined the latest episode of the podcast.