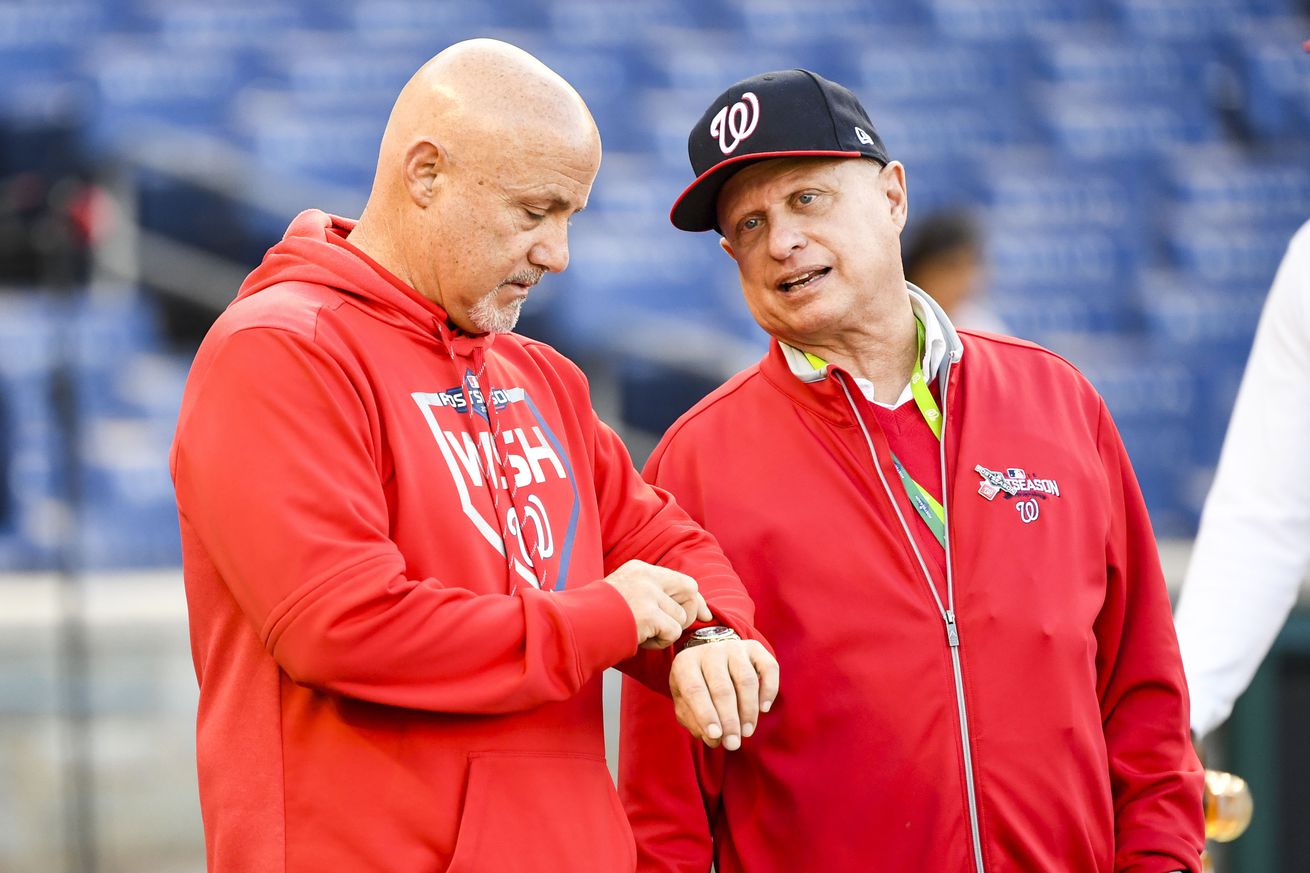 Photo by Jonathan Newton / The Washington Post via Getty Images

Well, congrats, Mark Lerner. You did it again. A year after he created some controversy by saying he believed Bryce Harper (who was still a free agent at that point) would not come back, the Nationals’ Managing Principal Owner told NBC Sports Washington’s Donald Dell that when it comes to Stephen Strasburg and Anthony Rendon, the team, “really can only afford to have one of those two guys.”

No one is quite buying that, it appears, least of all Scott Boras, the super-agent for both of the free agents, who told The Athletic’s Ken Rosenthal today that he thinks after winning it all this year, “World Series momentum has blossomed, millions in DC.”

“Everyone in DC knows special cherry trees create revenue bloom,” Boras added. Oh, this will be a fun couple weeks/months waiting for this situation to resolve itself. Meanwhile, a few opinion-havers have opinions… Go read your links:

Scott Boras responds to Mark Lerner, saying Nationals are experiencing ‘revenue festival’ – (The Athletic)
”Scott Boras, the representative for free-agent third baseman Anthony Rendon and right-hander Stephen Strasburg, had a pointed response to Nationals owner Mark Lerner saying he could not afford to re-sign both players.”

Mark Lerner says the Nationals can’t afford both Stephen Strasburg and Anthony Rendon – (WaPost)
“Both Strasburg and Rendon will require huge contracts, and the Nationals already have a substantial amount of money committed to a handful of players.”

Scott Boras holds all the cards representing Gerrit Cole, Stephen Strasburg – (NBC Sports Washington)
“The Yankees and Nationals are among the favorites to sign the top pitchers on the free-agent market, both of whom are represented by agent Scott Boras.”

Mark Lerner, Nationals owner, says team can only afford either Stephen Strasburg or Anthony Rendon – (Washington Times)
“Washington Nationals fans will have to say a bittersweet ‘goodbye’ to at least one of the key players from their first World Series championship.”

How much can the Nats actually afford to spend this winter? – (MASN)
“Conventional wisdom has stated they’re more likely to retain Strasburg and less likely to keep Rendon, who has no shortage of suitors following a brilliant regular season and postseason.”

Source: The Nationals are closing in on bringing Howie Kendrick back.

Nats ready to get to work at Winter Meetings – (MLB.com)
“Before the baseball world turns its attentions to the Winter Meetings, here’s a refresher of where the Nats stand as they descend upon San Diego.”

Nationals forced to choose between Stephen Strasburg, Anthony Rendon – (USA TODAY)
“At least one key member of the Washington Nationals’ World Series championship team will not be returning in 2020.”

Washington Nationals Say They Can’t Afford Both Strasburg And Rendon – (Forbes)
“Surely, the Nationals could find a way to pay for both players—who are both represented by Scott Boras—but to say so would show too much of the ownership group’s hand.”

MLB Winter Meetings: Burning questions as rumors fly around baseball – (USA TODAY)
“For the second consecutive year, the Winter Meetings will unfold in the hometown of a Washington Nationals legend seeking a nine-figure commitment and lifetime contract.”

The #Angels say they are interested in just about any starting pitcher, so obviously Stephen Strasburg is among them. They had a meeting. https://t.co/klRXT6Ni7K