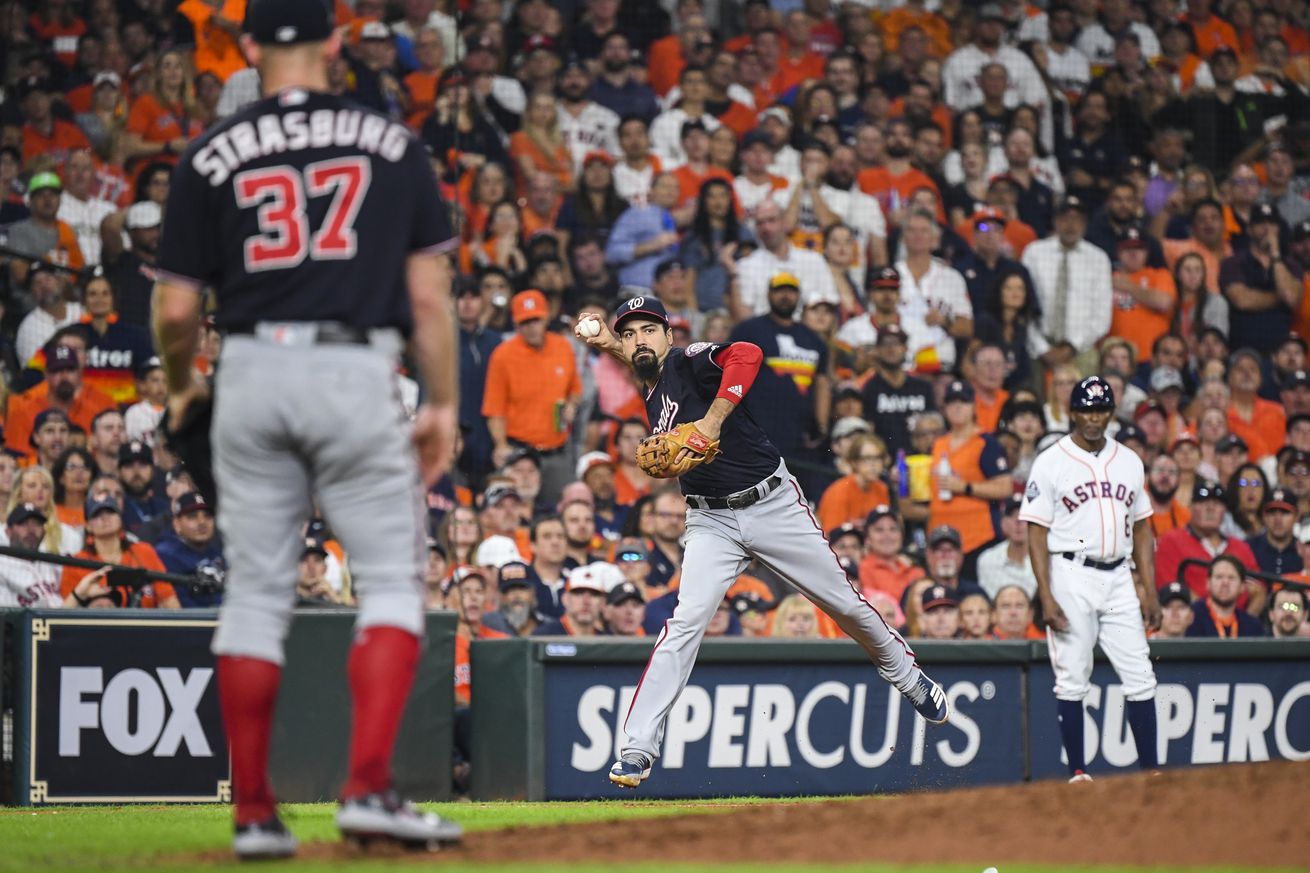 Photo by Jonathan Newton /The Washington Post via Getty Images

Catch up on the last 24 hours in Nationals news while we all wait patiently for the first big move of the winter in D.C.

Should Anthony Rendon or Stephen Strasburg be the Nationals’ priority this offseason? Will they bring Howie Kendrick back after a bounce-back 2019 campaign for the veteran? Is the pitch for Strasburg by his agent, Scott Boras, convincing? Where do the Nationals turn if it’s not in the cards for Rendon or Strasburg to return? How many questions can we string here to make this seem like a long-enough opening? We think that will do it. Go read your links…

Inbox: Should Nats prioritize Stras or Rendon? – (MLB.com)
“We begin today’s Inbox with that interesting thought — [Anthony] Rendon or [Stephen] Strasburg? Which player is more crucial to Washington’s chances at a repeat?”

Patrick Corbin lives up to the hype in first season with Nats – (MASN)
“Corbin may not have quite matched the performance of his rotation mates, but he was among the most consistently effective starters in the league.”

Stephen Strasburg delivered just in time to merit huge payday – (MASN)
“Though the end result was something special, the road Strasburg took to get there did have a few bumps along the way.”

A Finals MVP and a World Series MVP. pic.twitter.com/QAdj9QmJ2l

What are the chances of Howie Kendrick returning to Nationals? – (NBC Sports Washington)
“Davey Martinez’s handling of Howie Kendrick was a point of contention back when his managerial ability was held in less esteem.”

Braymer excited to join 40-man, details adjustments during 2019 season – (MASN)
“Left-hander Ben Braymer got a thrilling phone call on Wednesday from the Nationals telling him he had been placed on the organization’s 40-man roster.”

I appreciate your time @masnKerr and really enjoyed talking with you!! Go #Nats https://t.co/oWCEsbHiLG

Rosenthal: The Reds are interested in Zack Wheeler; the Braves’ big bullpen bet; more notes – (The Athletic)
“If right-hander Stephen Strasburg feared teams would view his injury history as a red flag, he would not have opted out of the remaining four years and $100 million on his contract with the Nationals.”

Bill for Nationals-Orioles TV dispute tops $99 million – (Washington Times)
“The bill is coming due for what the Mid-Atlantic Sports Network should pay the Washington Nationals for television rights for 2012-16: more than $99 million.”

Duffy’s World Series “word art” features Zimmerman’s joyful celebration – (MASN)
“’With this piece, it was just a case of trying to capture the joy on Ryan Zimmerman’s face,’ Duffy said of the image, which took roughly 100 hours to create.”