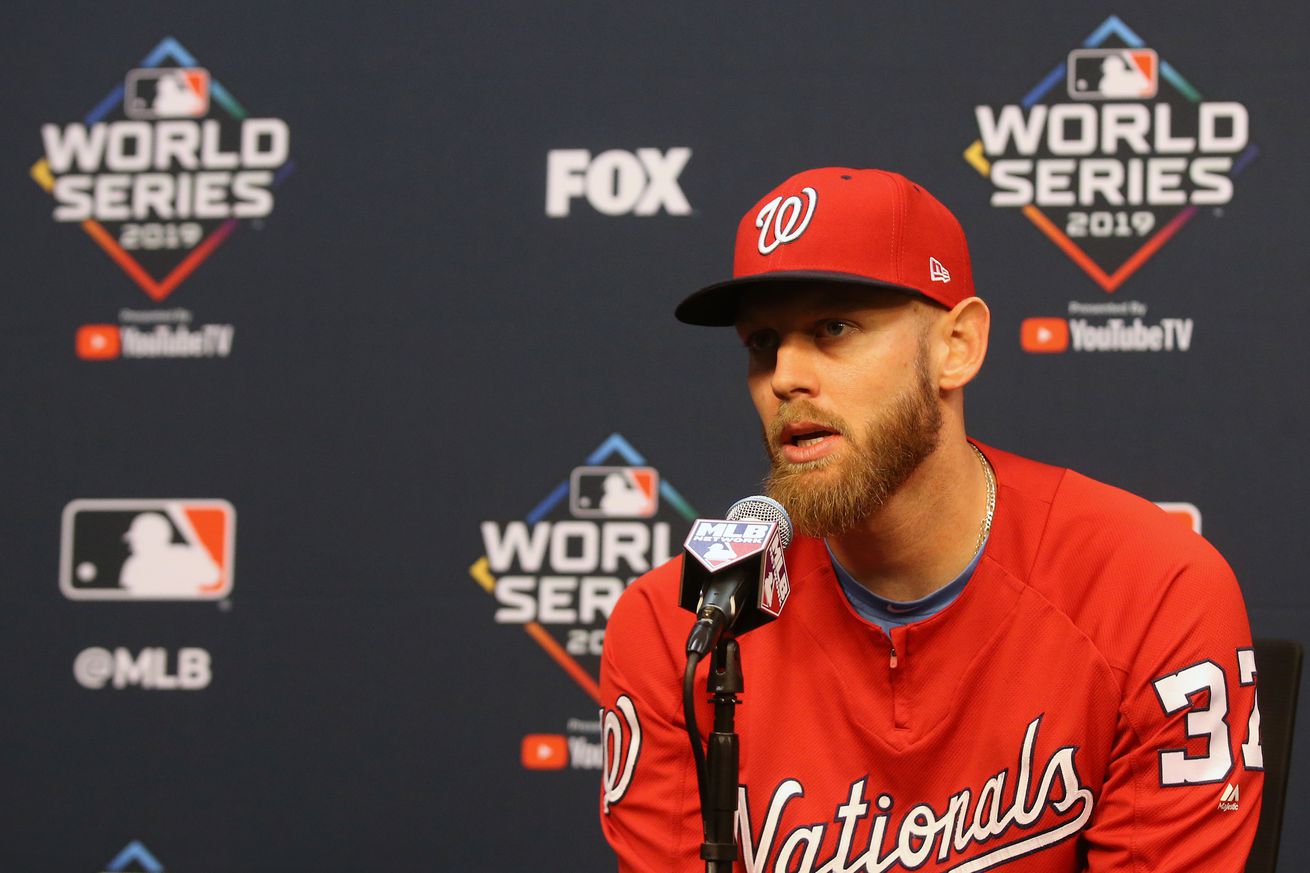 There should be plenty of stories to collect for tomorrow’s links, but for now you’ll have to settle for the following Washington Nationals-related stories, because they’re all we could find this morning when we went out searching for Nats news. Stephen Strasburg is being re-introduced to the nation’s capital at 11:00 AM this morning, so there’s that…

Strasburg press conference today at Nationals Park – (MASN)
“Stephen Strasburg last week decided to spend the rest of his career with the Nationals. Today he’ll get a chance to explain why.”

Nationals hold Racing Presidents auditions – (MLB.com)
“Forty-four hopeful residents from around the mid-Atlantic descended upon the Nationals’ Youth Baseball Academy complex in Southeast D.C. on early Sunday morning, looking to become a member of the rotating cast that dons the Racing Presidents’ costumes over the course of the 2020 season.”

Nats are in heavy on Donaldson. Braves likely get last call but Washington is aggressive. Nats were still in on Rendon after Strasburg, so they would seem to have the $. JD in great position but question is: Will he hit $100M? Rangers, Dodgers, Phillies, Twins also linked to JD

Madison Bumgarner was Nationals’ ‘Plan B’ if they couldn’t re-sign Stephen Strasburg – (Washington Times)
“Starting pitcher Madison Bumgarner, who signed a five-year, $85 million contract to join the Arizona Diamondbacks on Sunday, was the Washington Nationals’ ‘Plan B’ if they couldn’t bring back free agent Stephen Strasburg, The Athletic’s Ken Rosenthal reported.”

Report: Nationals saw Madison Bumgarner as their Plan B if Stephen Strasburg walked – (NBC Sports Washington)
“But if Strasburg didn’t return to the District, the Nationals were reportedly ready to pursue another starter on the free-agent market.”

Bowden: Handing out midterm offseason grades for all 30 teams – (The Athletic)
“Washington Nationals Grade: B – Now the Nationals will concentrate on trying to sign free-agent third baseman Josh Donaldson or try to trade for the Cubs’ Kris Bryant.”

On the Donaldson market: #Dodgers still in, but teams in bidding fear #Nationals will go big on either a four-year deal or three-year contract with a high AAV. A four-year deal would extend through Donaldson’s age 37 season.

Braves notes: Donaldson’s future, bench options – (MLB.com)
“Donaldson has likely positioned himself to get at least a three-year deal with an average annual value around $25 million.”

Marlins’ stock of young arms in high demand – (MLB.com)
“At the Winter Meetings in San Diego last week, more than half of MLB teams touched base with the Marlins regarding their controllable starting pitchers.”

Mets’ manipulation sets up unavoidable Dellin Betances chase – (NY Post)
“The Mets have put out the vibe they are ‘nowhere near done’ this offseason, an industry source said Monday.”

Zack Wheeler believes Phillies’ analytics team could put a little (Gerrit) Cole in his stocking – (NBC Sports Philadelphia)
“Zack Wheeler confirmed Monday that he had a better offer on the table than the five-year, $118 million contract he ultimately signed with the Phillies.”

The #Nats continue to go hard after Josh Donaldson, willing to pay $90-plus million for four years.