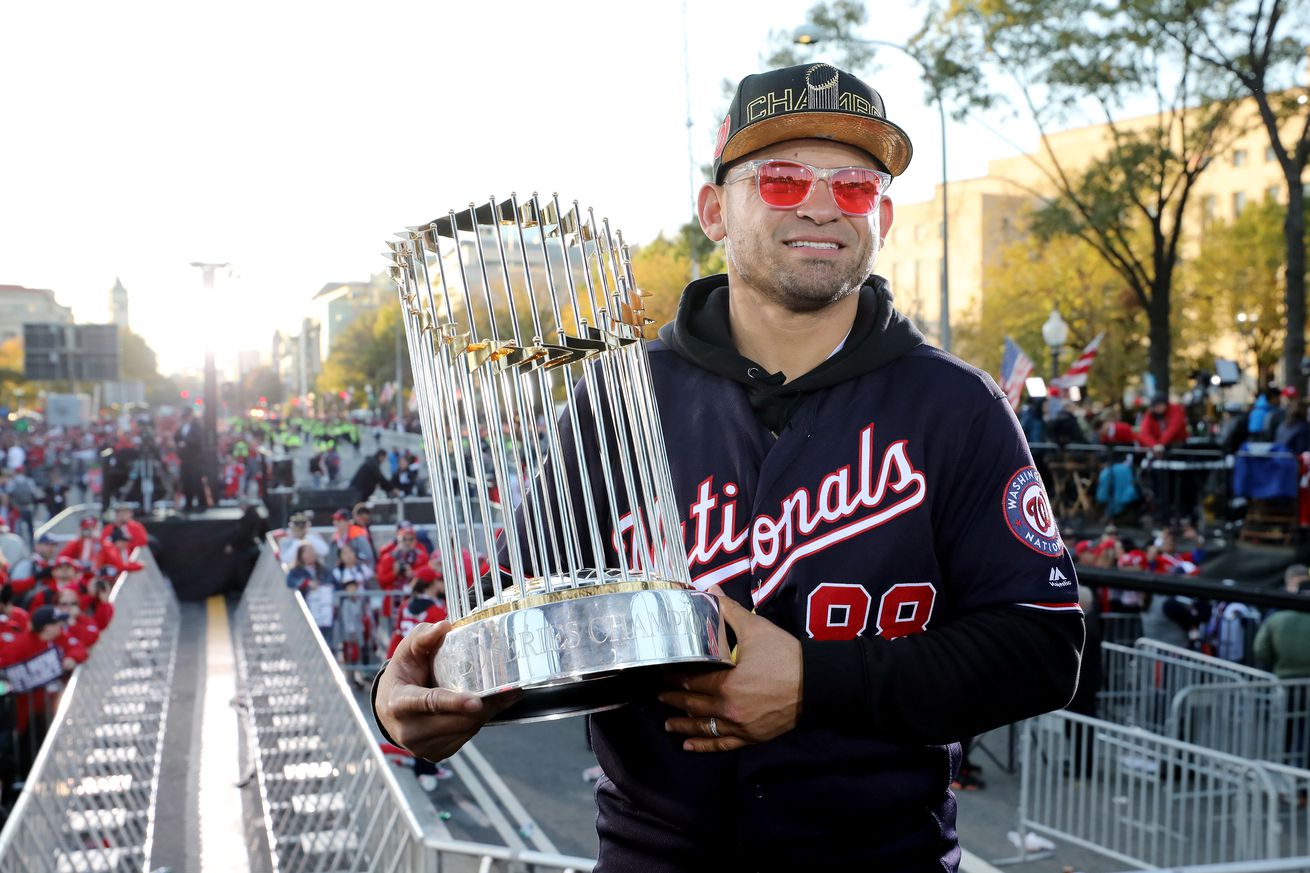 Gerardo Parra signed with the Yomiuri Giants in Japan. One writer at MLB.com thinks that Stephen Strasburg could re-sign with the Nationals before the 2019 Winter Meetings get started in early December. Get yourself caught up on all the latest news on Washington’s World Series winners right now! Go read your links…

パーラ外野手と契約合意 – (Yomiuri Giants Official Website)
“I am proud to be a member of the Yomiuri Giant Army with history and tradition. Playing at a high level of professional baseball in Japan is an opportunity to improve my ability.” – Gerardo Parra

Creating ‘Captain Obvious,’ a Local D.C. Sports Superfan – (Washington City Paper)
“It isn’t always easy being a D.C. sports fan, but for Ted Peters, it’s been a continuous pleasure. Most local fans might not recognize Peters by name alone, but a single glance at his bushy beard and all-white captain’s outfit easily gives away his identity.”

“Everybody wants to see themselves either on or in TV, and I’m one of them.” https://t.co/o7ILqW6RaJ

A Stras homecoming would be huge splash for SD – (MLB.com)
“As for [Stephen] Strasburg, [Mark] Feinsand thinks he could re-sign with the Nationals before the Winter Meetings begin on Dec. 8 in San Diego.”

Next step for Nationals’ top prospect Carter Kieboom depends on Anthony Rendon – (WaPost)
“’He had a terrific year last year, and he made big strides in Triple-A for us,’ [GM Mike] Rizzo said of Kieboom last week at the general managers’ meetings in Scottsdale, Ariz.”

Yan Gomes stepped up when needed but now is a free agent – (MASN)
“When the season began, the Nationals expected Gomes to get more playing time than Suzuki, certainly to regularly catch Max Scherzer and Stephen Strasburg.”

“It almost seemed like a weight had been lifted off an entire fan base.” – Daniel Hudson on @MLBNetworkRadio yesterday on his interactions with #Nationals fans after the #Nats won the World Series: pic.twitter.com/a0jPwLXDoK

Bernie Sanders backs Sean Doolittle over MLB minor leagues contraction – (Washington Times)
“According to multiple reports, MLB is considering contracting 42 of its 160 minor league teams — including two of the Nationals’ affiliates, the Class A Hagerstown Suns and the short-season Single A Auburn Doubledays — by 2021, the first season after the league’s Profession Baseball Agreement (PBA) expires.”

Court says MASN, Nationals arbitration can begin – (WaPost)
“A New York state appellate court ruled that a dispute between the Nationals and MASN can be decided by an arbitrator.”

Court sides with MASN in a profit distribution dispute with the Nationals https://t.co/Wo6ExA7TOr

Orioles win court ruling to allow arbitration in profit dispute with the Nationals – (Baltimore Sun)
“A New York appeals court ruled Tuesday that the Orioles have the right to take a dispute related to TV money with the Washington Nationals to arbitration, lifting a stay in the case to set the stage for a potential arbitration hearing.”