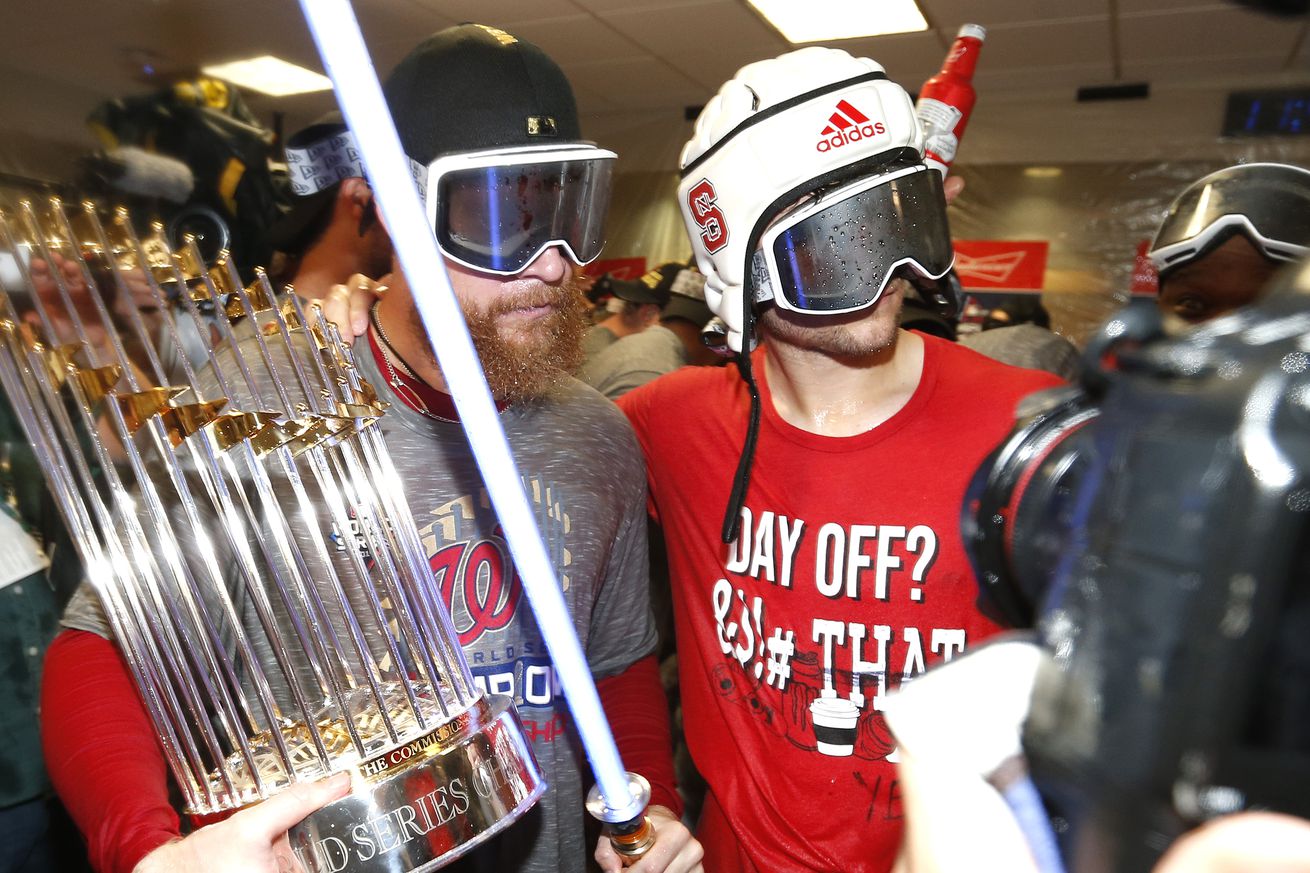 Catch up on the weekend that was in Nationals news while we all wait to see who’s playing third and who will be at 2B in D.C. in 2020…

The baseball world took the weekend off (mostly) after everyone traveled to San Diego, CA for the 2019-20 Winter Meetings. There wasn’t much in the way of Nationals news over the last few days, though Anthony Rendon was officially introduced as an LA Angel. Tomorrow morning in the nation’s capital, Stephen Strasburg will be re-introduced to D.C. in his own press conference officially announcing his new 7-year/$245M deal with the only team he’s ever known. While you wait for that, go read your links…

Rendon says he and Nats “just couldn’t come to an agreement” – (MASN)
“Anthony Rendon officially was introduced by the Angels on Saturday, donning a familiar red cap but with a halo surrounding a big A instead of the curly W he wore the last seven seasons.”

Monday morning Nats Q&A – (MASN)
“There are still holes to fill at first base and second base (in addition to third base). There’s a bullpen that needs another proven arm (or, preferably, two).”

I got to be a guest on my favorite radio game show @waitwait alongside my new friends @petergrosz, @paulapoundstone, @Faith_Salie, and host @petersagal! It was a hilarious show so I hope you’ll keep an eye out for the podcast ep or check it out when it airs this Saturday on @NPR! pic.twitter.com/1EzJjKw2kG

Nats’ Sean Doolittle makes guest appearance on ‘Wait Wait … Don’t Tell Me!’ – (WTOP)
“Doolittle’s public relations team asked him what he wanted to do in the offseason to extend riding the wave of the historic Fall Classic win.”

Nationals hold Racing Presidents tryouts – (MLB.com)
“If you’re one of the lucky ones, sooner or later this could be your part-time job — in front of tens of thousands of people, in the middle of July heat. You are an aspiring Racing President, and these are your tryouts.”

Running for president: The Nats hold mascot tryouts – (WTOP)
“On a cold December day, 44 of the Washington Nationals’ biggest fans, filed onto the field at the Nats’ Youth Baseball Academy for a chance to run to become a ‘Racing President.'”

2019 Was the Year We Learned the Baseball Was Lying to Us – (The Ringer)
“The Nationals in 2019 completed a tidy World Series narrative, the easiest to believe and promote: a perpetually cursed franchise that lost its most famous player, scuffled through 50 games, and recovered in time to enjoy three distinct playoff miracles…”

Hot stove signings and trades – (Beyond the Box Score)
“The $35 average annual value deal (with some money deferred) broke both David Price and Zach Greinke’s records for total money and yearly average money, and made news around baseball.”

Big Money For Gerrit Cole, Stephen Strasburg, Zack Wheeler & Madison Bumgarner Highlight Free Agency – (Forbes)
“So far, including the re-signing of Stephen Strasburg and others re-signing, teams have spent approximately $933 million on 16 starting pitcher on deals that are for a combined 43 years.”

As a tribute to Anthony, will you join us in saying thank you?

To close out the #RendonMatch, the first 100 donors who give a gift of $100 or more in support of the Academy will receive a limited edition print of the custom illustration. https://t.co/xvzAlhpHmA | #Nats4Good pic.twitter.com/pLHKhfwycK

Ryan Howard won’t be on ESPN next season – (Phillies)
“Howard, the former Phillies slugger and World Series champ turned baseball analyst, is walking away from his multi-year contract at ESPN to focus on his business endeavors…”

MLB rumors: Mets trading for Cubs’ Willson Contreras? – (nj.com)
“With the MLB Winter Meetings in the books, one player checks all three boxes to play connect the dots for a potential blockbuster with the Mets this winter: Chicago Cubs catcher Willson Contreras.”

Marlins are talking to Yasiel Puig – (HardballTalk)
“Jon Heyman breaks that silence today by reporting that the Miami Marlins met with Puig this week.”

Braves miss the boat on Bumgarner – (SI.com)
“Madison Bumgarner grew up going to Turner Field, watching the Braves as a kid. From all accounts, his first choice this offseason was to return to the south and pitch for that same team. It won’t happen.”