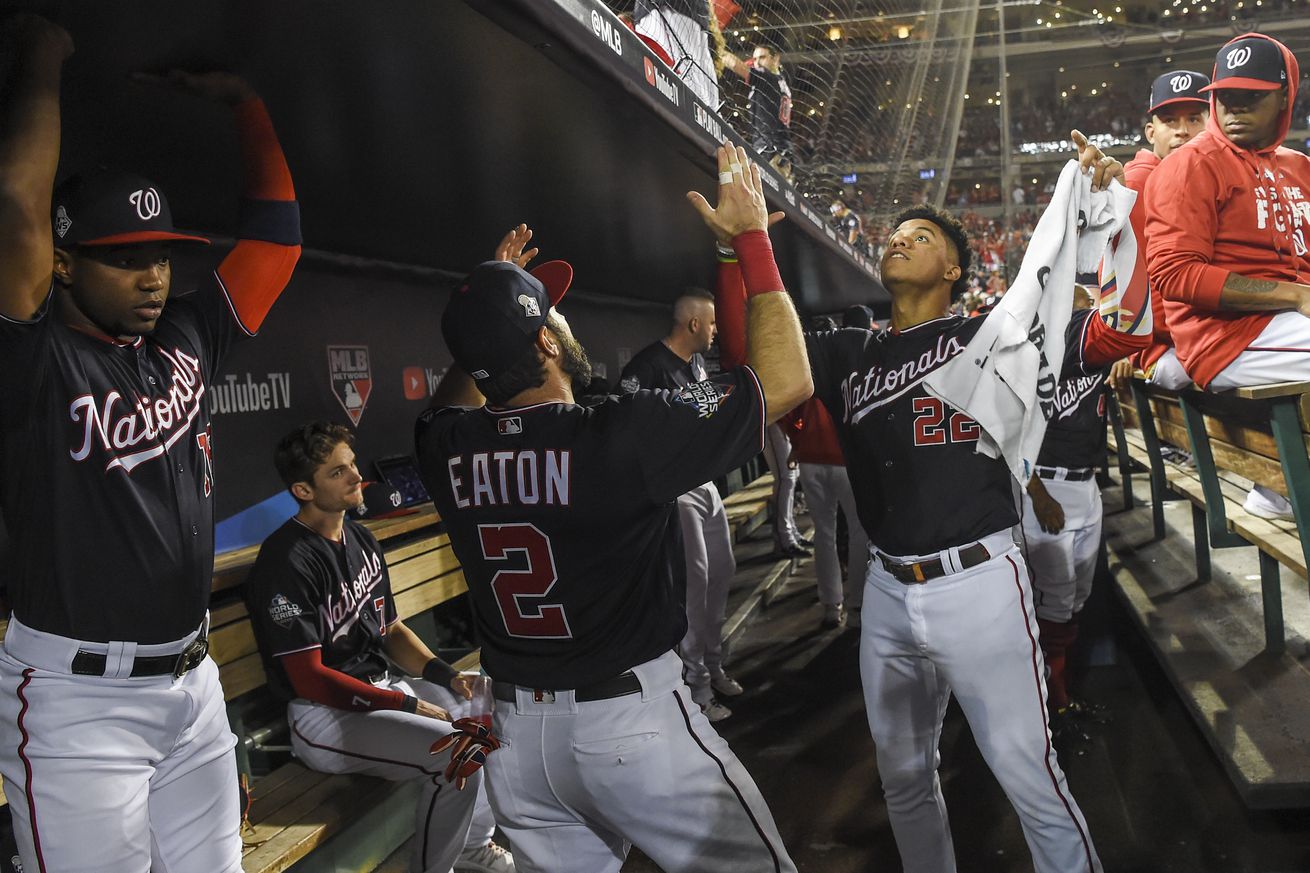 Stephen Strasburg is back. Anthony Rendon is gone. The Winter Meetings are over. Now the Nationals need to find a third baseman, and Washington’s front office needs to bolster their relief corps going forward and they need to make some additions to the bench as they build the roster in the weeks and months that remain before the start of Spring Training. So, while you wait to see what the Nats do next, go read your links…

What the Nationals still need to address this offseason – (MASN)
“Baseball’s offseason, believe it or not, is already halfway complete. The regular season ended 2 1/2 months ago. Pitchers and catchers report in two months.”

Reetz works on fundamentals as he moves up Nats chain – (MASN)
“Nationals catcher Jakson Reetz finished off his 2019 campaign with work in the Arizona Fall League, batting .333 with a .519 slugging percentage.”

The Washington #Nats are actively engaged with free-agent third baseman Josh Donaldson, knowing it will take a four-year deal to sign him.

Enigmatic Taylor finds himself in familiar position this winter – (MASN)
“As things currently stand, there is no spot in the Nationals lineup for Michael A. Taylor. He would seem to fit in well as the club’s fourth outfielder, one who is well-equipped to take over at any position if anyone else got hurt.”

Stephen Strasburg could be the rare “franchise player” – (Beyond the Box Score)
“Between the infamous injury shutdown, and a 2019 World Series MVP, it is fitting that the marriage between Strasburg and the Nats will last at least through his age-38 season, in 2026.”

How Pitcher Stephen Strasburg’s $245M Deal Is Structured To Pay Far Less – (Private Wealth)
“A whopping $80 million, equal to one-third of the contract’s total value, won’t be paid until 2027. And that IOU, which will be paid in three annual installments after the actual contract ends, only accrues interest at a paltry rate of 1% a year.”

MLB Hot Stove after Winter Meetings – (MLB.com)
“4. About that Josh Donaldson market …The Braves are focused on re-signing him in their pursuit of a third straight NL East title, and the Nationals and Rangers want him after being unable to land Rendon.”

Can the Miami Marlins keep pace with an improving NL East? – (Miami Herald)
“The Miami Marlins’ president of baseball operations is navigating his way through the offseason as Year 3 of the club’s latest rebuild — their last rebuild, he hopes.”

Kevin Cooney: Phillies have ‘no other choice’ but to ‘outspend mistakes’ – (PhillyVoice)
“When the Phillies plane went ‘Wheels Up’ from San Diego — the home of Saint Dorothy Mantooth — back to Philadelphia on Thursday afternoon, there was undoubtedly a feeling among the club’s brass that they had made some strides in the National League East.”

“If money is keeping Vince Velasquez and Nick Pivetta in the starting rotation, then you might as well take that $203 million and flush it down the toilet. It has been tried and it has failed.” @KevinCooney thinks #Phillies have some spending left to do: https://t.co/uKmGBBHMHJ

Why Steve Cohen May Write $1.5 Billion Check For Mets And Never Gain Control – (Forbes)
“Hedge fund titan Steve Cohen is working on buying the New York Mets for $2.6 billion from Fred Wilpon and Saul Katz im a process that would see him own 80% of the MLB team in five years.”