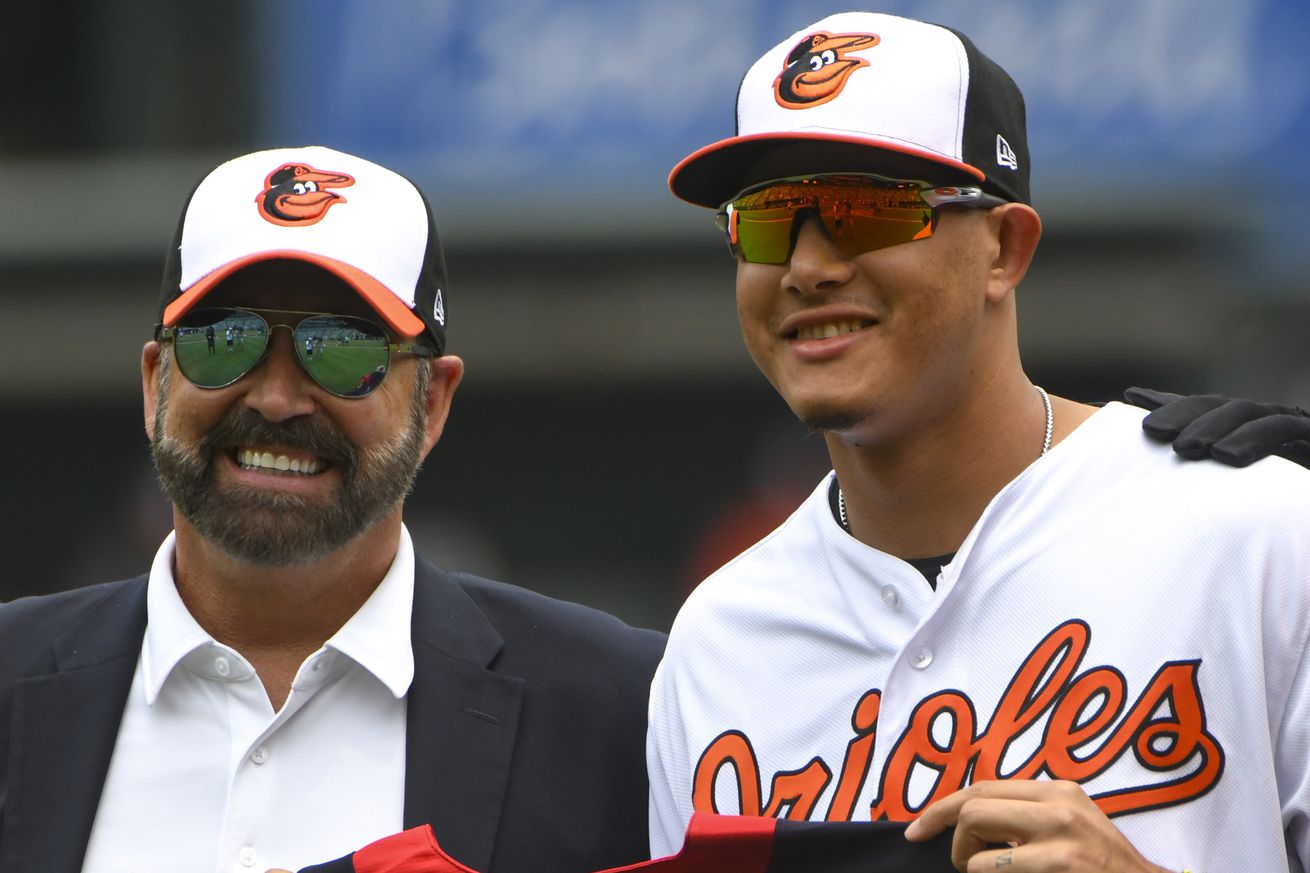 If you bought a Manny jersey, you probably got some good use out of it. Unless you bought it in 2018. | Photo by Mark Goldman/Icon Sportswire via Getty Images

Do you remember the first Orioles jersey you ever bought? I hope you chose more wisely than me.

All across SB Nation this week, it’s jersey week. Today, some of our writers are sharing their stories about the first jerseys that they ever bought for themselves. Feel free to share yours in the comments below.

Today’s question: What is the first Orioles jersey or clothing item you bought with your own money?

How you want to define “your own money” is up to you, but I’d say if you saved up your allowance money for a Cal jersey, that counts, and if you bought something with a gift certificate or gift card, that doesn’t count.

This is a great question, and one I’m not sure I know the answer to. There’s a chance it was a Penn State football jersey, but I can’t say for sure. I do distinctly remember buying a Matt Wieters shersey my first time at Camden Yards back in 2011.

(Side note: My first album was Smash Mouth, Astro Lounge. I don’t care what you all say, it still holds up)

I cannot recall if I spent my own money on this or not, but I do remember a white Mike Bordick shirsey being the first shirsey I chose to wear day after day in elementary school. The thing was in tatters by the end, and I was never really that much of a Bordick fan (I really liked Melvin Mora as a kid), so I’m not sure why I liked that shirt so much.

After college I got nostalgic and found the same exact shirt on eBay for $5. I bought it and have worn it to games periodically since. I don’t want it to wear out like the first one did.

(Drew doesn’t 100% remember if he bought this jersey, but it’s a good story so I’m including it anyway)

My favorite jersey is a gray Nick Markakis shirsey, dating probably back to 2007, before “Baltimore” appeared on the road jerseys. I like it because Markakis is the only Oriole in the last 20 years that, for me, has challenged Cal Ripken in terms of being my favorite player. I liked Adam Jones and Manny Machado and Miguel Tejada and Melvin Mora and every other All-Star that came through Baltimore, but Markakis reached another level. He was homegrown and a great player through some lean years, as well as a no-nonsense professional, so the jersey for me is a tribute to a favorite player.

If I was the one that bought it: I got it because Markakis was looking like the first homegrown star the Orioles had had in years. He had a lot of hype to him in the minors, and when he finally came up in 2006, it felt like the beginning of a new era. I felt certain that he was going to be a generational player in Baltimore, so I wanted to get in early and have a shirt to wear when his career took off.

It was the spring of 2004, not long before Opening Day. I felt a foolish level of confidence in and excitement for the Orioles, who had just signed Tejada, Lopez, and Rafael Palmeiro before that offseason. It seemed like a great time to buy a jersey. I went to some athletics store in Owings Mills Mall, a mall that no longer exists today, and after a moment’s indecision I had them fetch me a Tejada jersey, because, I reasoned, “He signed a six-year contract, what could go wrong?”

As fate would have it, the O’s were never good in Tejada’s time, except for the first couple of months in 2005, and they traded him after four of the six years. Not long after the trade, it turned out he was in the Mitchell Report, and also that he was two years older than he said he was. None of the guys he was traded for ended up being a big part of the next good Orioles team. So it goes. Not like a Lopez or Palmeiro jersey would look any better now.

Who was the first player who made you go out and buy a jersey or shirsey or something along those lines?