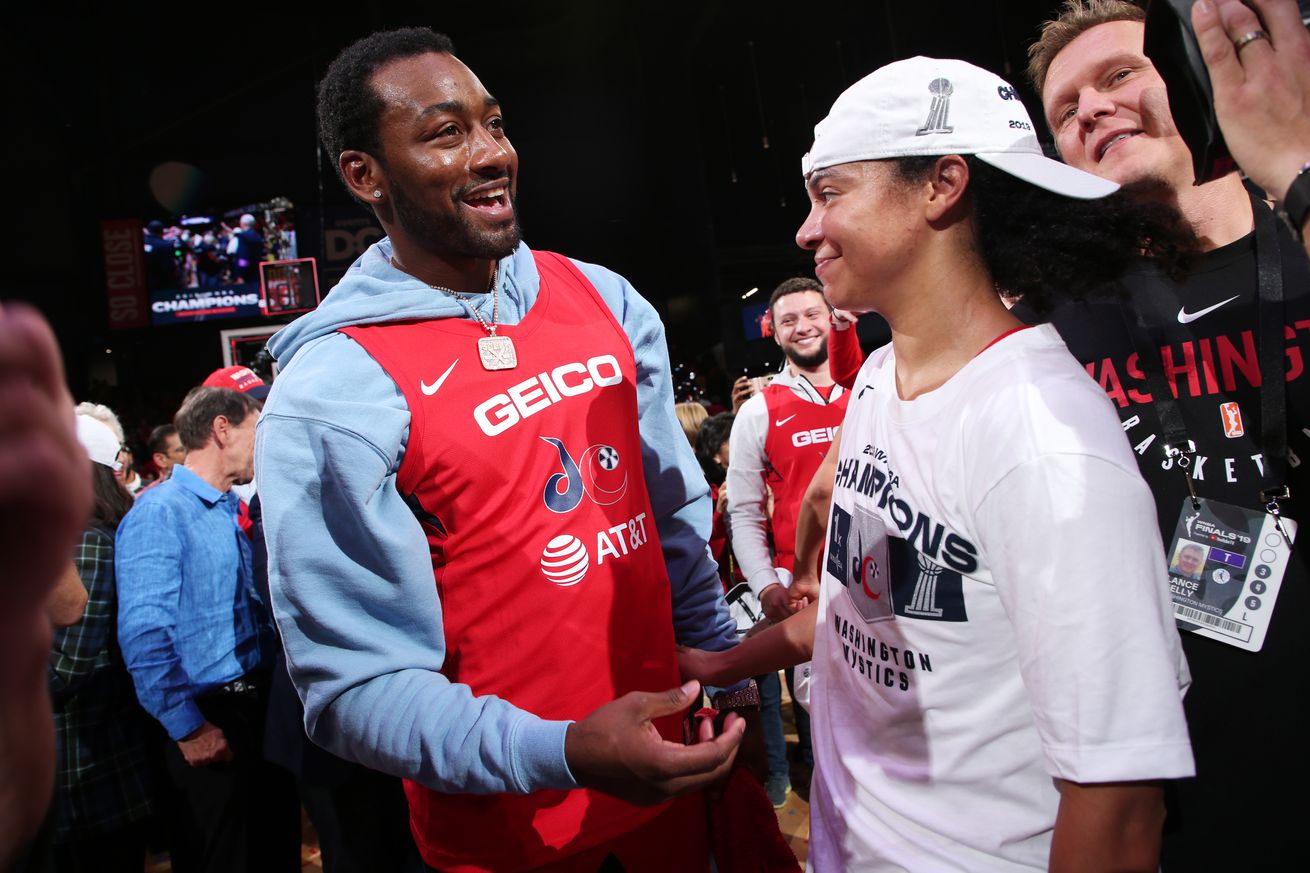 This picture never gets old! | Photo by Ned Dishman/NBAE via Getty Images

Happy Thanksgiving everyone! Here are some things that we should be appreciative of this year.

Happy Thanksgiving everyone! Before you all head to the dining room table and binge eat your turkey and stuffing, let’s take a moment to be thankful for some of the things that happened with the Washington Mystics and Wizards this past year.

The Mystics are the 2019 WNBA champions! I STILL CANNOT BELIEVE THAT THEY WON IT ALL JUST LAST MONTH!

The Mystics also broke many records this past summer. Check them out here in the video below.

Not to sound like a broken record, but we broke a lot of records ️ #RanItBack #TogetherDC pic.twitter.com/5kDIvdy5PC

Emma Meesseman’s decision to play for the Mystics

The Washington Mystics came into the 2019 WNBA season as one of the league contenders, though they weren’t the favorites. One reason why they may not have been outright favorites right away was because we just didn’t know how Meesseman would play once she returned from missing the 2018 WNBA season to be with the Belgium women’s national basketball team full-time.

It wasn’t easy to reintegrate Meesseman back to the lineup. But by the time the WNBA Playoffs started, it became clear that she was Washington’s number one option and their key to winning the championship.

Yes, Elena Delle Donne won the regular season MVP award. But Washington wouldn’t win the championship unless Meesseman was there carrying them to the finish line.

The Wallstar is probably out for the entire 2019-20 NBA season. And it is sort of unfortunate that Washington wasn’t granted a Disabled Player Exception.

But let’s face it. The NBA saw Wall lead the Meesse-MANIACS in Game 5 of the WNBA Finals and thought he was a bit TOO light on his feet.

Hey, I was like that too after seeing the Finals MVP go into “Belgian Cat” mode!

Since the Mystics’ championship, we have also seen Wall take part in drills.

The latest John Wall update… well, see for yourself. pic.twitter.com/83gOZND5yy

We shall see how Wall actually plays in due time. But it’s encouraging to see that he is active during practices.

Rui Hachimura’s rookie season is off to a strong start!

The Wizards welcomed Hachimura with the ninth overall pick in the 2019 NBA Draft last June. Hachimura isn’t just Gonzaga’s latest star to make the pros. He is also the first Japanese player to be a first round pick. Ever!

Since Hachimura became a Wizards and started his rookie season, he has actually started on a high note. Yes, there were some other players available from the one-and-done route, but I’m just glad Rui is here! He is averaging 12.5 points and 5.2 rebounds this season, not including yesterday’s game against the Phoenix Suns.

Bradley Beal wants to be in Washington for the longer term

With Wall likely out this season, the Wizards’ focus centered around their long-time shooting guard. Beal was offered a three-year, $111 million contract extension starting in the 2021-22 season. Ultimately, Beal accepted a two-year, $72 million extension. The move helps the Wizards in the short-term by building around Beal. But the deal is also short enough for Beal to consider other teams if Washington’s current rebuild doesn’t work out.

If Beal did not accept a contract extension this season, trade talk would have been rampant around him all season long and the Wizards would probably have to trade him sooner rather than later. Instead, they have some peace of mind while they figure this current rebuild out. Perhaps this may turn out a little better than some initially thought, including me.

A new front office structure for the Wizards

Many, if not most Wizards fans felt that then-President of Basketball Operations Ernie Grunfeld would be the “GM for Life.” But when it was apparent that the Wizards would not make the 2019 NBA Playoffs, Ted Leonsis let him go.

Tommy Sheppard was hired to be the Wizards’ next General Manager, even if the process to get him the permanent role was a bit long. The good news with Sheppard is that he’s very PR-friendly and willing to collaborate with other members of the front office, things that Grunfeld wasn’t exactly known for.

Most of all, thanks to our staff and to all of YOU for reading our site!

There are plenty of things to be thankful for as Wizards and/or Mystics fans. However, I’m most thankful to our staff for writing content on this site daily and to each of you reading our content whether the Wizards win or lose.

Without our writers and readers, this site would just not be as fun as it is. So once again, thank you for being here!

Have a safe and happy Thanksgiving everyone!