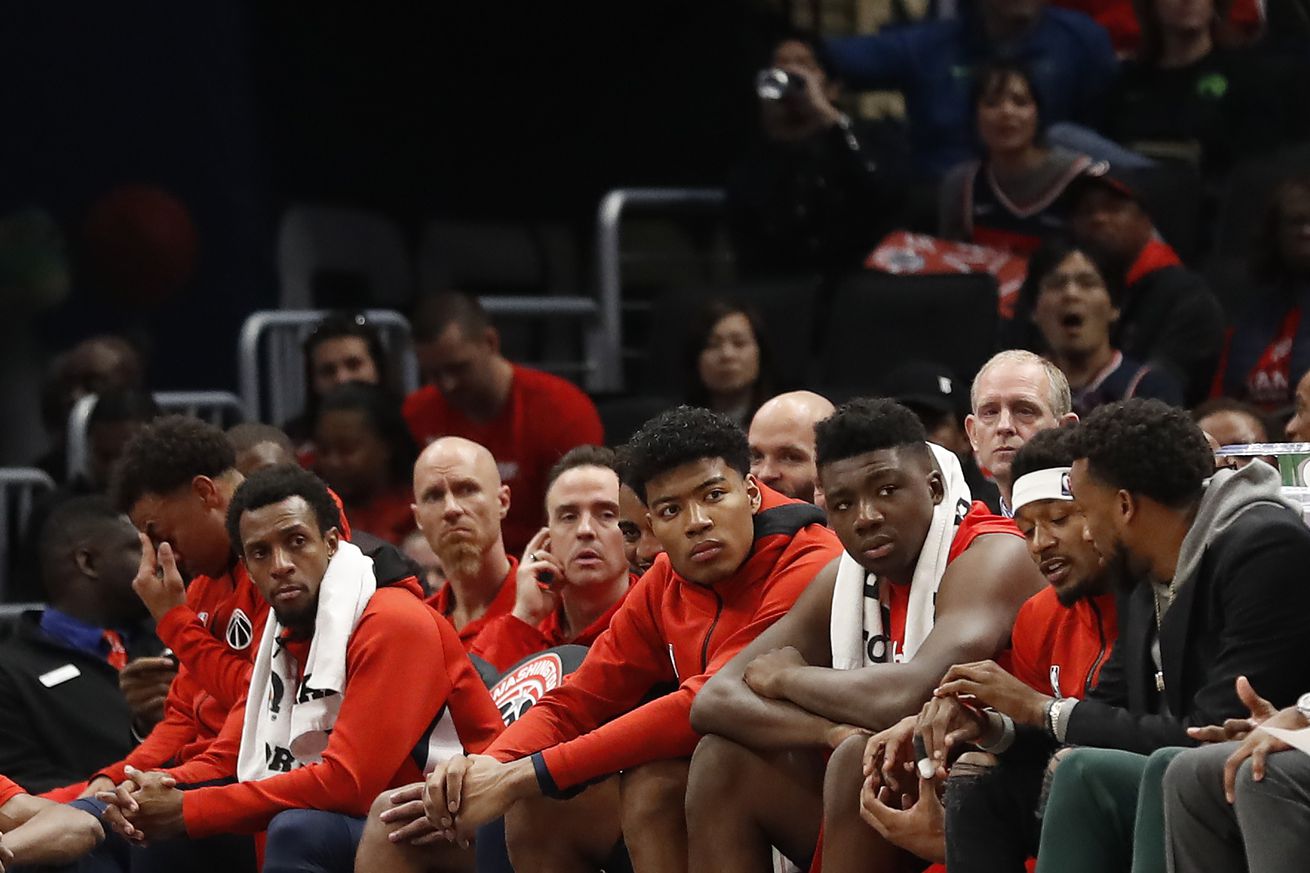 The Washington Wizards have played 22 of 82 regular season games. We now have a better understanding on ow well they are doing and what they can improve on as the 2019-20 NBA season continues.

The Washington Wizards currently have a 7-15 record, and are in the 12th spot in the NBA’s Eastern Conference. Now that we’ve hit the first quarter mark of the season, what do we know about this Wizards team?

The Wizards have one of the NBA’s best offenses

Raise your hand if you predicted the Wizards would have a top-5 offense this year.

Washington currently has the fourth best offense in the league and scores 118.1 points on a nightly basis. On the offensive end, they score at a higher rate than teams like the Los Angeles Lakers, Boston Celtics, and Los Angeles Clippers.

We knew entering the season that the stars were aligning for Bradley Beal to have the best offensive season of his career (and he has so far) but other guys are getting in on the fun too. Six Wizards players average double figures per game and many are capable of exploding for 20 or more points on any given night.

The Wizards went all-in on analytics this summer. After their change in philosophy, you can tell early on as they shoot 34.6 three-pointers per night and connect on nearly 37 percent of them — good enough for the sixth best three-point shooting percentage in the league.

What’s gotten overlooked a bit in Washington’s gaudy offensive numbers is that they’re doing a terrific job of sharing the basketball. The Wizards lead the league with 28.3 assists per game. Bradley Beal is averaging a career-high 7 assists per night while Isaiah Thomas and Ish Smith chip in with 5.1 and 4.3 assists per game, respectively.

No one expected the Wizards’ offense to be good this year, let alone Top-5 good. But the combination of a few unlikely surprises, taking and making more three-pointers to go along with sharing the basketball has made Washington one of the best offensive teams in the league.

The Wizards have the NBA’s worst defense

For as good as the offense has been, the defense has swung to the other side of the pendulum. Washington’s defense is bad, like worst in the NBA bad, and has the potential to be historically bad.

Washington has a defensive rating of 115.7 — worst in the NBA. On top of that, Washington surrenders 121.9 points per game to its opponents — also worst in the NBA. The Wizards offense has allowed the team to stick around in games but ultimately, you can point your finger at the defense to find out why they don’t win most those close games.

Entering this year, we knew Washington was going to be bad on the defensive side of the floor. The most disappointing point about it though is that it does has some to do with X’s and O’s, but has more to do with a lack of effort on that end of the court.

As mentioned, the stage was set for Bradley Beal to have the best offensive season of his career — and he’s taking full advantage. Beal is the NBA’s fifth best per-game scorer as he’s averaging 28.3 points per game on 46 percent shooting.

Last year, Beal rounded out his game as he became a much better finisher at the rim to shake off his old reputation of being just a knockdown shooter. This year, Beal is continuing to attack as well as let it fly from three-point range and there’s no such thing as a bad shot this year as Beal has the ultimate green light.

Additionally, like the rest of the Wizards, Beal isn’t too concerned about playing defense and is conserving his energy for the offensive end of the floor. Walt Bellamy averaged 31.6 points per game for the then-Chicago Packers back in 1961-62 which seems like an untouchable record. But if Beal keeps scoring at his current rate, he could surpass Gilbert Arenas for the second-most prolific scoring season in Washington Wizards history.

Washington got the steal of the summer in Davis Bertans

The San Antonio Spurs needed to free up cap space last summer in order to sign free agent Marcus Morris. Not only did that fall through, but that was after the fact that the Wizards already sent the rights to Aaron White (remember him?) to the Brooklyn Nets in exchange for Bertans from the Spurs.

Bertans is shooting a scorching-hot 44.8 percent from three-point range which is fourth best in the league among all players who average at least 6 three-point attempts per game. He’s the second-highest scorer on the Wizards and is capable of catching fire on any given night.

Troy Brown Jr.’s second year is not off to a good start

It’s still early, but Troy Brown Jr.’s sophomore season has a chance to go off the rails.

After returning from injury, Brown found himself in the starting lineup at the small forward position. However, after a cold stretch, Brown’s minutes have started to dwindle as Isaac Bonga has been reinserted into the starting lineup.

Troy Brown Jr. is getting the same treatment that Tomas Satoransky once received from Scott Brooks. Brooks is playing him at the small forward position, which is out of position, and isn’t putting him in a position to succeed.

Brown is most comfortable at the point guard position with the ball in his hands but isn’t getting many opportunities as either Isaiah Thomas, Ish Smith, or Chris Chiozza are always on the floor. As a result, the only real way for Brown to get involved is by making the hustle plays and crashing both the offensive and defensive glass.

We saw late last year and in this year’s Summer League that Brown is best suited with the ball in his hands. But if he never gets any playing time there, we might not see Brown develop as well as we would like.

As the losses inevitably start to pile up and the closer we get to the trade deadline, it’s a given that we’ll hear Bertans’ name in various trade rumors.

Bertans is an ideal trade piece because he’s a microwave scorer yet also very low maintenance. He’s seamlessly fit into Washington’s offense this year and outside of running a few plays for him — doesn’t really demand the ball all that much. Not to mention, he’s a competent defender too.

Beal was involved in trade rumors, but he cannot be traded until after this season is over after he signed a two-year $72 million contract extension with Washington. That still won’t stop other teams from asking about Bertans’ availability.

This summer, the Wizards were part of a three-team trade which also included the New Orleans Pelicans, and Los Angeles Lakers. Washington sent New Orleans a diet coke and a bag of chips and in return, received Moritz Wagner, Bonga, Jemerrio Jones, and a future second round pick. Little did they know, they may had acquired a key piece (or two) for years to come.

Outside of Bertans, Wagner has been the biggest surprise of the season so far for Washington. The second-year center is averaging 12 points and 6.1 rebounds per night as the backup center. Wagner has strung together an impressive start to the season and will get even more chances to prove himself over the next few weeks as Thomas Bryant is out with a foot injury.

In back-to-back summers, Washington made what was thought to be a ho-hum trade with the Lakers. Yet here we are a year later, and the Wizards have a very bright outlook at the center position with Thomas Bryant and Wagner.