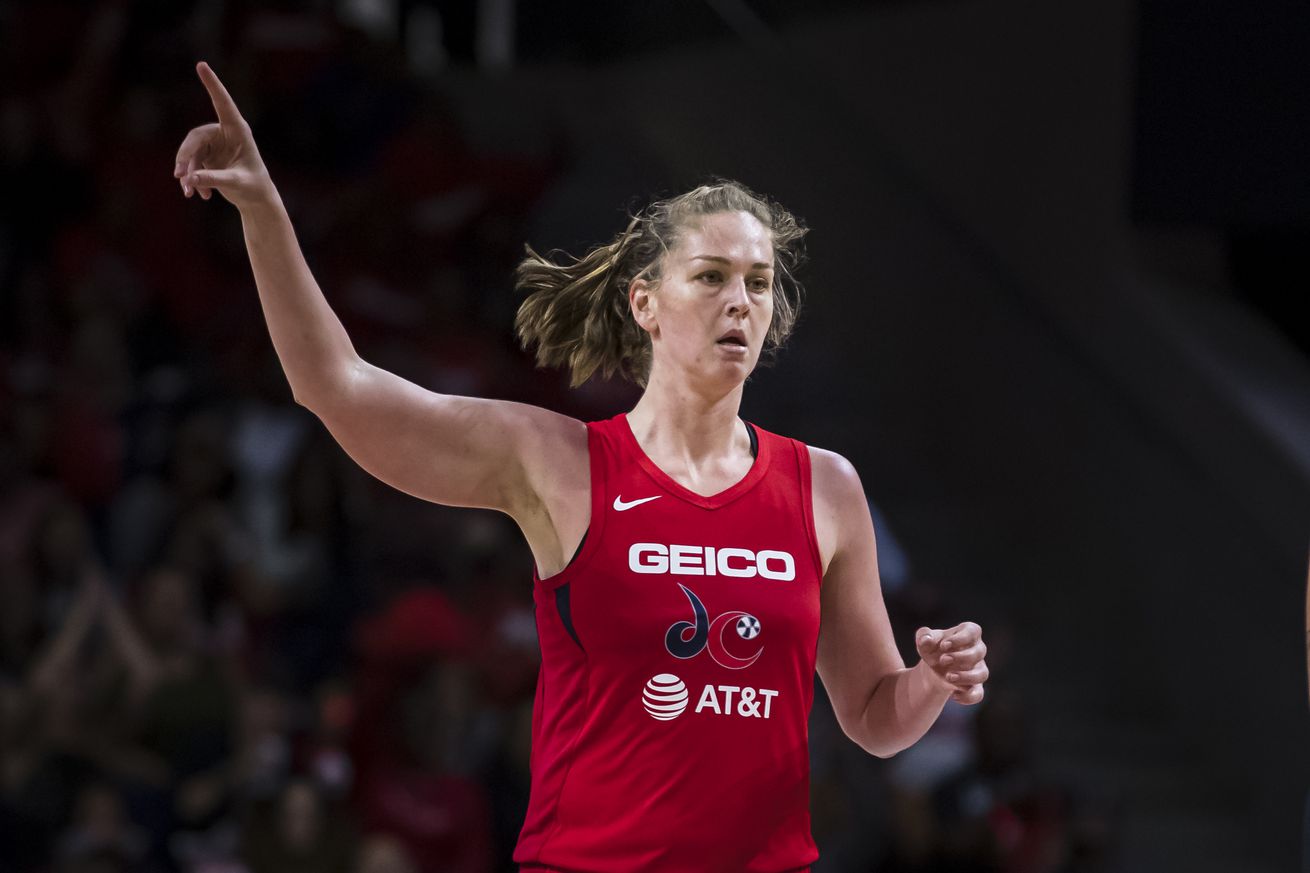 Emma Meesseman has a knack for getting herself stories on this site for the right reasons. | Photo by Scott Taetsch/Getty Images

The WNBA Finals MVP is firing on all cylinders on the court in Europe and won the Vlaams Sportjuweel (Flemish Sports Jewel) in her native Belgium. All on the same day!

Washington Mystics forward Emma Meesseman hasn’t rested much since winning the 2019 WNBA Finals and the Finals MVP Awards. In fact, she’s back in Europe, playing for UMMC Ekaterinburg in the Russian Premier League and FIBA EuroLeague Women. Let’s check up on her performance abroad and how things are also going in her native Belgium.

On a roster that features many WNBA All-Stars like Brittney Griner, Jonquel Jones, Kayla McBride, Allie Quigley and Courtney Vandersloot, it isn’t necessary for the Finals MVP to even play in domestic competition. For now anyway.

There is a perception that WNBA star players are playing three games a week 50 weeks a year. While it is true that many WNBA players like Meesseman play year round, they also aren’t necessarily playing every single week and 35 minutes each and every game. This especially applies for a team like UMMC can stagger lineups so stars like Meesseman can get a relatively extended break. She deserves it!

Anyway, UMMC unleashed Meesseman for their EuroLeague games, however. There, she is averaging 15.8 points (second), 5.5 rebounds (second) and 3.2 assists (third) per game in six games played. These stats seems a bit pedestrian, especially after winning the FINALS MVP AWARD. But keep in mind that Meesseman’s overall efficiency (23.5) also leads the entire team and UMMC quite frankly has more talent than the Mystics.

Meesseman has scored in double digits and shot at least 50 percent in all of her EuroLeague games. Her best performance was a 28 point performance on 11-of-12 shooting against Turkish club Cukurova in a 112-56 beatdown last Wednesday.

She missed only one shot ! @EmmaMeesseman controls the game today .

UMMC is 6-1 in Group A of EuroLeague Women. They should be in good position to advance to the knockout stages once group play ends on Feb. 26. 2020.

Wednesday was a big day for Meesseman another reason besides a dominant game in EuroLeague. Back in Belgium, Meesseman won another award, the Vlaams Sportjuweel. It is awarded by the Vlaamse Overheid (Flemish Government) to a native Dutch-speaking Belgian athlete each year.

Furthermore, the winner of this award can only receive it once in his or her career. It’s typically given after an athlete at the end of his or her career, or in Meesseman’s case, after a major event like winning the WNBA Finals MVP.

Meesseman is the first basketball player to win the award and one of very few team sport athletes to do so since it was first awarded in 1982. So it’s a big freaking deal.

In an interview with Sporza (in Dutch), Meesseman said “As a team sport athlete, I didn’t expect to win such a big individual prize [like the Vlaams Sportjuweel] in my career.” I am very honored and it motivates me to keep going.”

While Meesseman may be really humble, I think it’s totally fine for her to bask in the spotlight. She won the Vlaamse Reus last week! Bigger things can still be coming her way!

Belgian basketball fans are still making ONE LAST PUSH for Meesseman to win the national female athlete of the year award!

Meesseman is winning awards in Flanders, her native region of Belgium. But as most people are aware, Belgium is also a French-speaking country where over 40 percent speak it as their native language. Do they want her to win the Female Athlete of the Year award too?

I think the answer’s a clear “HELL OUI!” So let me explain.

Last November, I went to Belgium for vacation where I met up with some old friends from school and work over the years. Most of them are from large Flemish cities like Ghent or Antwerp, which tend to be the cities I visit regularly.

Along the way, I made an impromptu trip the obligatory pilgrimage as a Mystics fan from Brussels to Ieper, Meesseman’s hometown where I saw the Last Post ceremony at the Menin Gate (Menenpoort) at 8 p.m. Sorry, my tweet said “last gate.” Anyway … YOU KNOW WHO found out. She was happy that I was there!

A couple days later, I traveled to Mons, a city about one hour south of Brussels. There, I met up with Stéphanie Lahaye, the founder of Swish-Swish, a Francophone Belgian WNBA site and Florian Madarasz, one of the site’s contributors. He’s probably best known to Mystics fans as the man behind the MysticsBE Twitter account.

Like me, both Stéphanie and Florian are big NBA fans. They were also quick to sport their Mystics gear when I met them at the train station. We were very spirited while debating where Los Angeles Lakers star LeBron James fits in the hierarchy of the “Greatest Player of All Time” among many things. We also talked a lot about how the WNBA and Europe can become stronger together.

Stéphanie wrote a column on Swish Swish today as an open letter to Belgian sports journalists, giving seven good reasons (in le français of course!) why Meesseman should win their vote for the NATIONAL Female Athlete of the Year award. One reason, among other things was her role as an unofficial Belgian ambassador and my visit last month played a part in it!