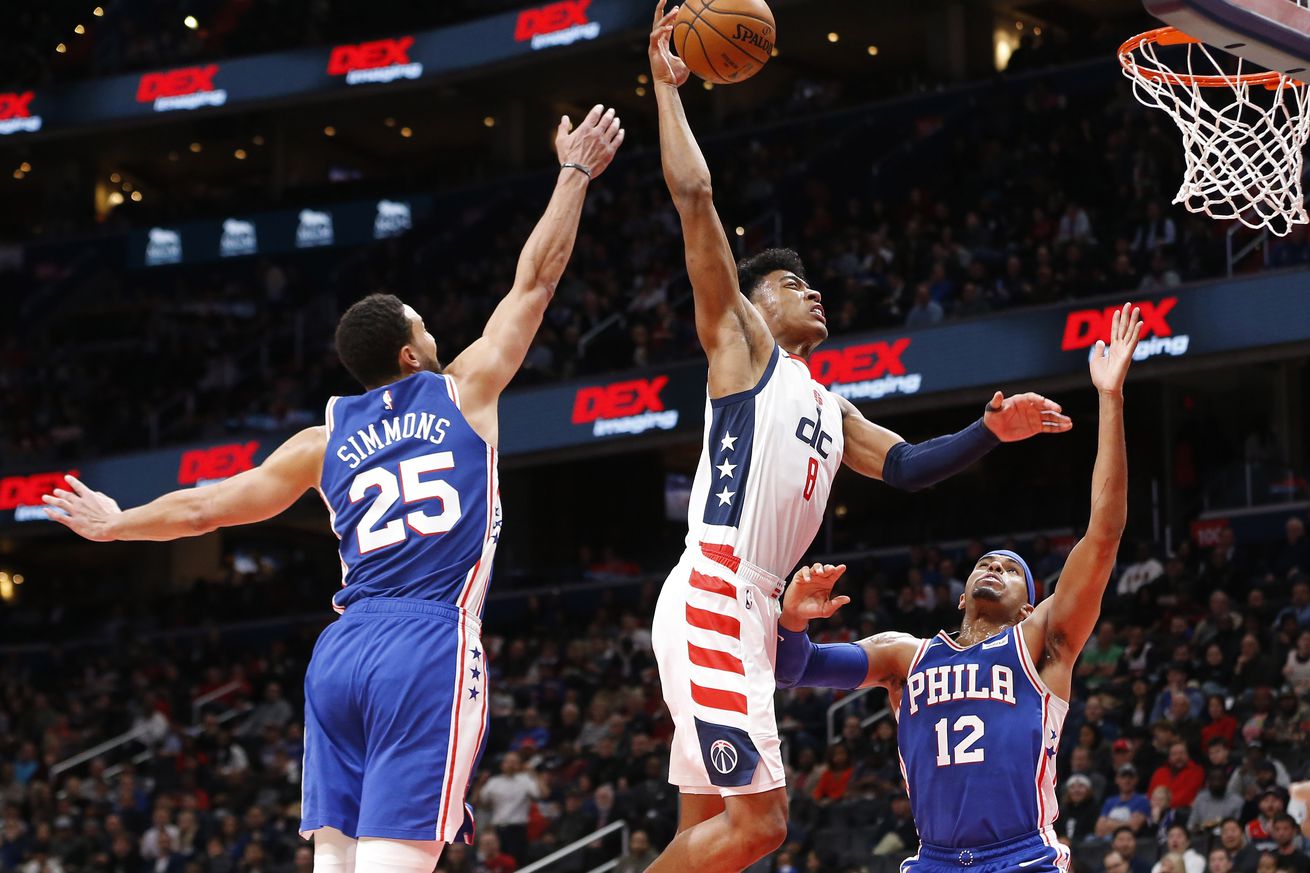 Hachimura, Beal, Bertans, and Smith all scored double digits in the win!

Three Washington players eclipsed the 20-point mark led by rookie Rui Hachimura with 27 points as the Wizards beat the 76ers 119-113 for their 10th straight win at home over Philadelphia. Bradley Beal added 26 points and Davis Bertans was a walking bucket (at least in the first half) ending the night with 25 points on 9-16 shooting as the Wizards get their most impressive win of the season to date.

After a slow start to this game, things changed for the Wizards in the second quarter on the heels of some smoking hot shooting from Davis Bertans. Bertans hit three-pointer after three-pointer to get this Wizards back in this one and Washington used their defense (yes, defense) to spark a 29-11 run to close the half. Washington outscored Philadelphia 40-22 in the second quarter to take control of this one as they wouldn’t relinquish the lead the rest of the night.

Philadelphia was able to claw back within five, 102-97 late in the fourth quarter, but that’s the closest they’d get as Washington would knock down their free-throws down the stretch, putting this game on ice.

Davis Bertans catches fire in the first half

Like we’ve become accustomed to, Davis Bertans entered the game and drilled his first three-pointer of the night with just seconds remaining in the opening quarter. It would be a sign of things to come.

The Latvian Laser was a flame thrower in the second period. Whether it was curling off of screens for clean looks, knocking down catch-and-shoot three-pointers, or bailing out his teammates at the end of the shot clock, Bertans couldn’t miss (literally) as he exploded for 19 points in the second quarter on a perfect 8-8 shooting including going 6-6 from three-point range.

The Latvian Laser went 6-6 from three (22 points) in the first half. #RepTheDistrict pic.twitter.com/dkIAfjfEF1

The second half wasn’t as kind for Bertans who went just 1-8 from the field after the halftime buzzer.

Multiple players step up for Washington

Rui Hachimura has his best game in a Washington uniform scoring 27 points while grabbing seven rebounds in the process. His production on the offensive end was impressive but his effort on the defensive end is what made tonight so special for the rookie. Hachimura was tasked with guarding Joel Embiid and Al Horford tonight – no easy task for anyone, let alone a rookie. Don’t let the box score fool you, Hachimura held his own when guarding either of the all-stars in isolation situations.

Ish Smith was inserted into the starting lineup tonight and took full advantage of his opportunity. The vet scored 19 points on 7-11 shooting to go along with 8 assists and didn’t commit a single turnover in the process.

And let’s give a shoutout to Chris Chiozza. No, he didn’t score, but he was crossing guys up and breaking ankles tonight. More importantly, the second unit was flowing with him at the reins and Chiozza dished out six assists (and only committed one turnover) in what was his best game as a Wizard.

The injury bug has hit the Wizards

The injuries are already starting to pile up for the Wizards.

Earlier this week, it was announced that Thomas Bryant would miss three weeks due to a foot injury leaving the Wizards razor thin at the center position. Tonight, we learned that Jordan McRae had a second surgery performed on his finger and Isaiah Thomas was a late scratch with a strained calf. Don’t forget about C.J. Miles who’s also sidelined with an injury.

Up Next: Washington heads to Miami to take on the Heat.