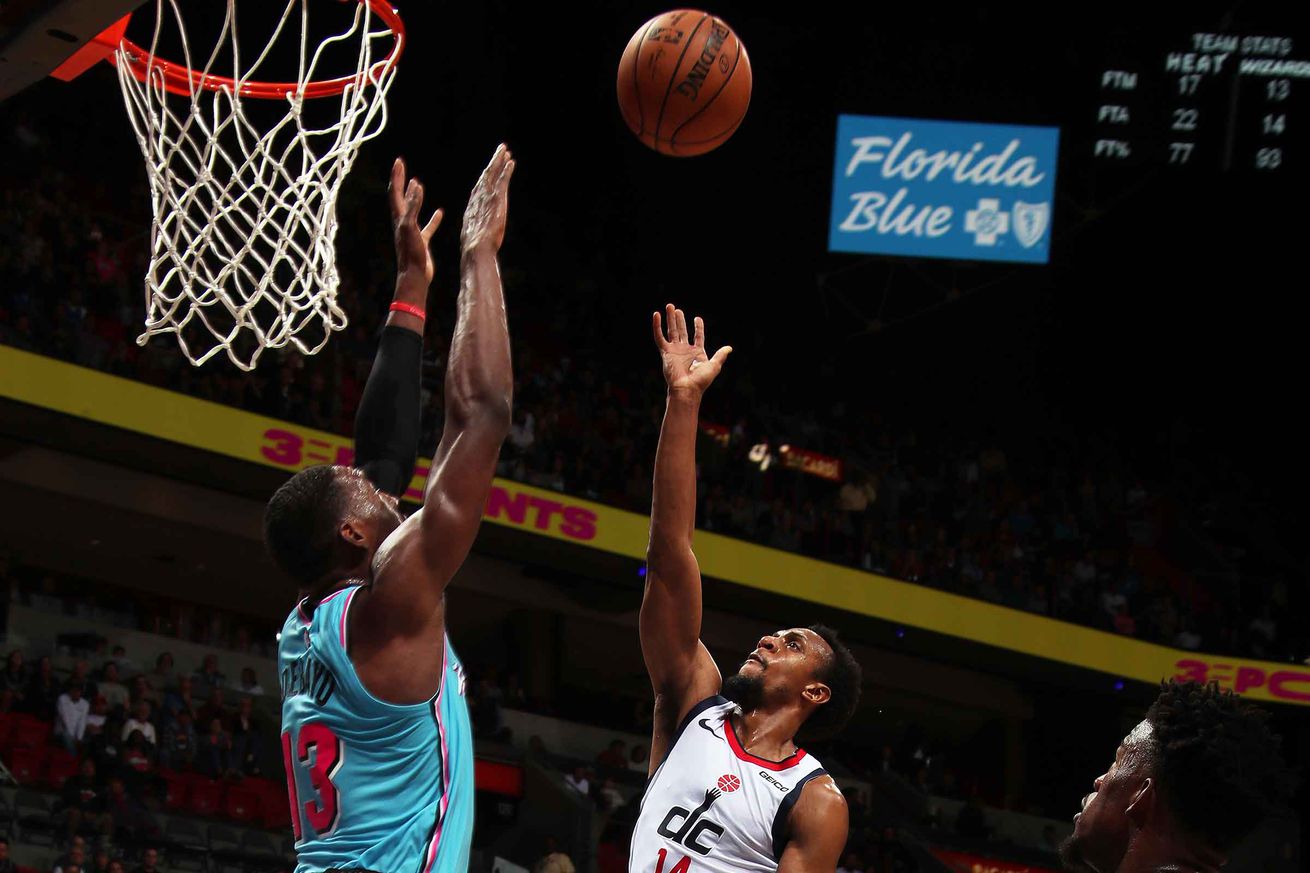 Ish Smith turned in another crafty and effective performance for the Wizards. | Photo by Issac Baldizon/NBAE via Getty Images

The first half was an entertaining offensive display, but the Wizards couldn’t keep pace in the second, and fell to the Southeast Division-leading Miami Heat, 112-103 in Miami.

In the early going, the Wizards seemed not to miss center Thomas Bryant or the bevy of injured teammates. Their defense stunk, but that’s become normal for them. At halftime, the Heat had an effective field goal percentage of .607, but trailed by four because the Wizards were shooting .648.

In the second period, Washington seemed intent on playing to the analytics ideal, which recommends threes, at-rim attempts, and free throws as the most efficient way to score. The Wizards attempted just one two-pointer outside the restricted area, and more than half their shots were from three-point range.

That would switch in the third and fourth quarters as the Heat played better defense and perhaps the Wizards began to tire on the second night of a back-to-back.

In the fourth quarter, the Heat made sure Bradley Beal wouldn’t lead the Wizards to victory by double-teaming him anytime he touched the ball. Beal managed to work free for a few shots, but mostly had to give up the ball and hope his teammates could make plays.

It looked like the Wizards need some coaching on what to do when a star teammate gets doubled. The player whose man left him should recognize the situation and immediately cut to the basket. Even if he doesn’t get the ball — and a layup — he’s forcing the short-handed defense to defend him in the paint. That should leave a teammate open elsewhere on the floor.

When the ball comes out of the double, the offense is playing four-on-three. Attacking quickly should give the offense a numbers advantage and lead to an open shot. Against the Heat, the Wizards were too deliberate and failed to punish the Heat for aggressively doubling Beal.

Herro was about as impressive a 19-year old rookie could look. He had 22 points and seven rebounds and played with veteran confidence and poise.

Adebayo seemed to be doing an impersonation of young Dwight Howard — 24 points, 13 rebounds and two blocks. He even completed the act by missing three free throws.

Washington’s top performers were Ish Smith, Davis Bertans and Wagner. Smith turned in another smart and crafty game — 15 points, eight assists, 2-4 from three-point range, and just one turnover. That’s a solid game from the veteran.

Bertans seemed borderline unstoppable in the first half, but cooled considerably in the second. He ended up 5-13 from three-point range (an off shooting night for him), but he contributed 10 rebounds and a pair of blocks without fouling or committing a turnover.

Wagner was decent, though he struggled to contain Adebayo. Still, he scored 19 points on 14 shots, and added a couple steals. His two turnovers and five fouls hurt.

Beal led the team in scoring, but it was a subpar game for him. Miami’s double-teaming was effective in the final period, but doesn’t explain the sloppy turnovers throughout the game. Beal committed a game-high six turnovers, and they were costly on a night the Wizards didn’t shoot well.

Player Production Average is an overall rating metric I developed that credits players for things that help their team and debits them for things that don’t. PPA is pace neutral, accounts for defense. In PPA, 100 is average and higher is better.

Scoreboard Impact Rating translates individual production into points on the scoreboard in this game.