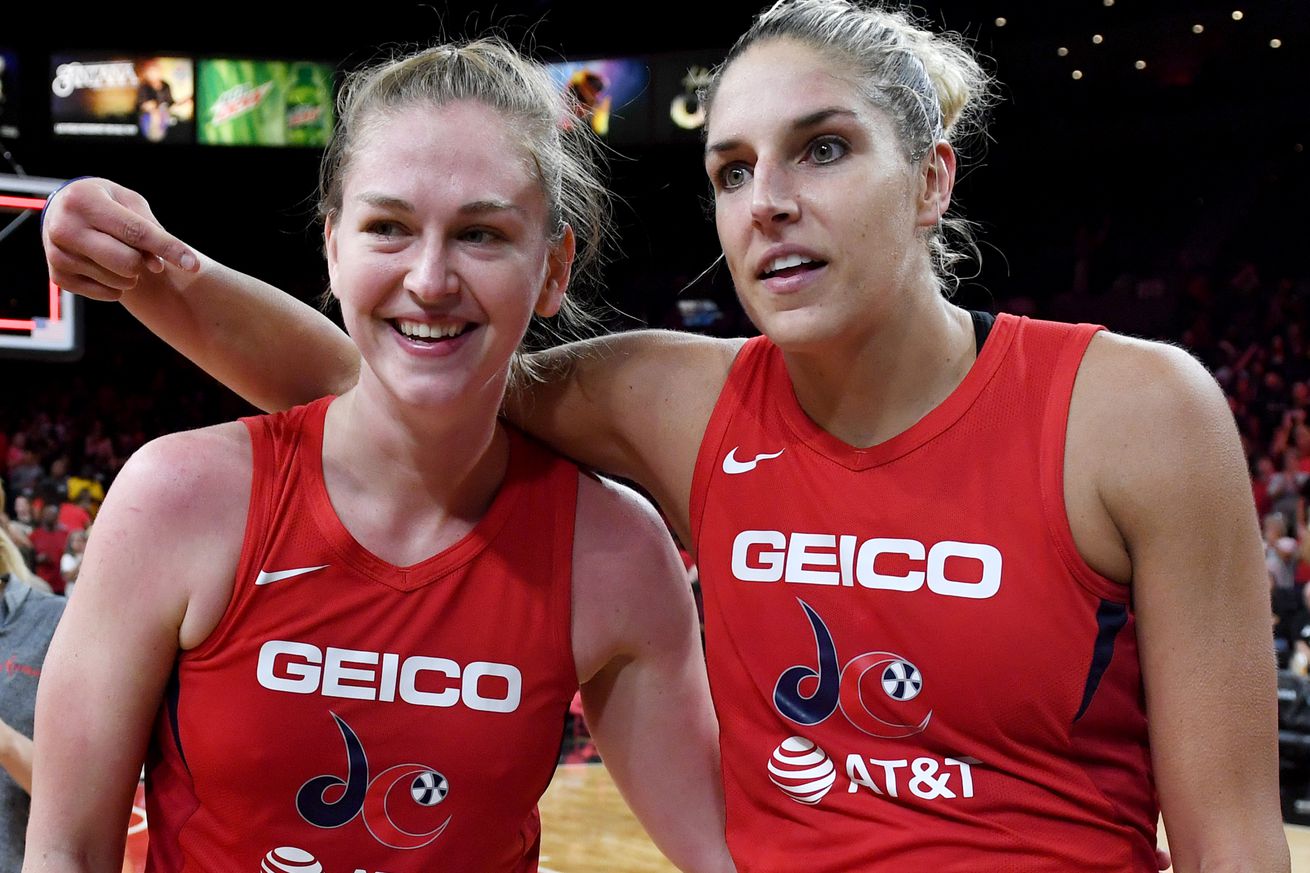 I think it’s easy to say that Elena Delle Donne is on the All-Time Mystics’ first team. But can we also say the same for Emma Meesseman? | Photo by Ethan Miller/Getty Images

The Washington Mystics won the WNBA championship in the third year of Elena Delle Donne’s tenure with the team. Now, it’s time to see where she and Kristi Toliver fit in.

Two years ago, I wrote up a list of the Washington Mystics’ all-time first and second teams in commemoration of their 20th anniversary. One of the key criteria I had for each potential selection was that she had to play for the team for at least three seasons.

Because of the self-imposed three-year rule, I left out Elena Delle Donne and Kristi Toliver, who were first-year Mystics at the time. It also left out some other stars like Lindsey Harding and Katie Smith because they weren’t in D.C. long enough either. Harding only played for Washington from 2009-10. Smith, a Naismith Hall of Fame player, was only in D.C. for the 2010 season.

Two years later, the Mystics won the WNBA championship. Last season, Delle Donne won the 2019 WNBA MVP award, Emma Meesseman won the Finals MVP award and most people around the WNBA think highly of the Mystics franchise. They didn’t just a few years ago. Yup, the “Mystakes” are a thing of the past, hopefully for good.

Anyway, it’s time to refresh this list after a major accomplishment. Here is the 2019 edition of the Mystics’ All-Time first and second teams!

As you might expect, there are some changes to the first team after a WNBA championship.

No-brainer that the starting point guard of the 2019 WNBA championship team makes the First Team, especially now that she’s spent three years in Monumental Red. Toliver averaged at least 13 points per game as a Mystics player and made an All-Star appearances in each of the last two seasons when Washington made the Finals. Toliver also shot a career-high 49.4 percent from the field and averaged a career-high 5.9 assists per game in the 2019 season.

Beard spent the first eight years of her WNBA career with the Mystics where she was one of the league’s most versatile scorers and best perimeter defenders. She is considered to be the best guard to ever wear a Washington uniform, and until recently, the best player to play for the franchise since Chamique Holdsclaw.

Beard missed the 2010 and 2011 seasons due to injury, but has played since 2012 for the Los Angeles Sparks where she was part of their championship team in 2016 along with fellow All-Time Mystic Kristi Toliver. Individually, Beard’s scoring has dropped in L.A., but her defense didn’t. She was the WNBA’s Defensive Player of the Year in 2017 and 2018.

There’s no question who the best overall player is in franchise history to this point. Delle Donne has been one of the top individual players throughout her career, including her in D.C. She is the only Mystics player to ever win All-WNBA First Team honors or an MVP award.

Statistically, Delle Donne has remained a prolific scorer where she averaged around 20 points per page in each of her three seasons as a Mystic. Furthermore, she made 97.4 percent of her free throws (114-of-117!!!) just this past season!

If I wrote this piece after the 2018 WNBA season, I’d still stand firm and say that Delle Donne shouldn’t make an All-Mystics team because she didn’t play long enough in the nation’s capital. The reaction wouldn’t have gone well then, so I’m glad I’m updating this after EDD’s THIRD YEAR in D.C.!

Holdsclaw was the face of the Mystics franchise when she was drafted in 1999. And though she was traded to the Los Angeles Sparks in the 2005 season, she was their only “true superstar” until Delle Donne arrived in 2017, mostly due to Washington’s mostly mediocre-at-best performances and bad luck with the draft lottery.

While in Washington, Holdsclaw played on the Mystics’ best teams at the turn of the century, including in 2002 when Washington advanced to the Eastern Conference Finals. It was the only time Washington advanced one round in the WNBA Playoffs until 2017 when they advanced from the first round to the semifinals.

Holdsclaw played for the Sparks and the then-San Antonio Silver Stars. Today, she is an advocate for mental health.

The final frontcourt spot on the first team was either staying with Langhorne or going to Emma Meesseman. I wavered back and forth on this, but I ultimately went with my head by sticking with Lang, not my heart.

Langhorne was a consistent performer for Washington during her time in the nation’s capital and earned three All-Star appearances, including a 2010 appearance when a team of All-Stars played Team USA. In fact, she played all but six games during her time in D.C. If there’s one thing I really appreciated about Langhorne, it was her workhorse mentality that helped her be one of the most consistent low post players in the WNBA, even during the Mystics’ darkest times.

I also think that Langhorne had a bigger connection with the Mystics fan base than Meesseman does. The Maryland ties run deep with the fan base, and it was a delight for Terrapin fans to see Langhorne continue to play nearby.

It is true that Langhorne hit her prime while playing on two very bad Mystics teams in 2011 and 2012. But she still played a major part redeeming herself in Washington in 2013, the first of General Manager and Head Coach Mike Thibault’s tenure.

Langhorne was traded to the Seattle Storm in 2014 in exchange for Tianna Hawkins and Bria Hartley. She has remained with the Storm ever since and was part of their 2018 WNBA championship team.

Now that the first team is announced, here are the next five Mystics players who make up the second team.

McCray was one of Washington’s top performers in their first few seasons, where she averaged over 17 points per game in the 1998 and 1999 seasons. Like Holdsclaw, McCray was part of Team USA’s 2000 Olympic Gold Medal team — and she was also part of the 1996 Olympic team, though that was before the WNBA existed.

Latta was the Mystics’ starting point guard in the early years of Mike Thibault’s coaching tenure from 2013-15 and remained a strong scoring presence off the bench in the 2016 and 2017 seasons. She was best known for her three point shooting and endless energy on and off the court which helped her shine the most while wearing a Washington uniform.

Though Latta has not played in the WNBA since the end of the 2017 season, I haven’t seen any official “retirement” notice yet. But I at least think she could still provide a boost for some teams.

Team when drafted: ESB Villeneuve-d’Ascq, based near Lille, France

The Mystics may have had the fourth pick in the 2013 WNBA Draft, but the face of their youth movement ended up being a 19-year-old Belgian player drafted in the second round. Meesseman is the longest-tenured Mystic on the current roster and has blossomed into one of the world’s top players. Her performance in the playoffs was spectacular and she deserves all the love she received from the DMV, the Benelux and everywhere over the last two months.

I really, REALLY wanted to put her on the first team, but Meesseman hasn’t been a “full-time” Mystic during Washington’s runs since the 2017 season even though she was a rising star in her early years. Also, many of her recent accomplishments worldwide were with Belgium or Russian club UMMC, accomplishments on teams that aren’t the Mystics.

If Meesseman were American or if Belgium wasn’t good enough to be on the world stage, she would have earned more All-Star appearances and even All-WNBA team honors in 2018 and 2019. She would make the All-Time Mystics first team in her sleep. Instead, that will be left up to speculation.

I still think Meesseman can be to the WNBA what Dirk Nowitzki was to the NBA as a true European superstar. But that’s only going to happen with an international-friendly WNBA CBA where there are mutually agreed-upon breaks for European training periods and tournaments. Until then, we won’t truly see what Meesseman’s ceiling is as a WNBA player.

Currie was a consistent double-digit scorer for the Mystics over multiple seasons. She enjoyed her best individual season in 2010 when Washington clinched the first seed in the Eastern Conference.

Though Currie may not be associated with the Mike Thibault Era of the Mystics like Delle Donne or Meesseman are, she was on their 2013 “Redeem Team” and returned to play on the 2018 team that made the WNBA Finals.

After the 2018 WNBA season, Currie retired to work for Nike in Oregon.

Page was Washington’s first-ever draft pick and called the “Original Mystic.” She was Washington’s starting center during all of their early seasons and was part of the 2002 team that advanced to the Eastern Conference Finals. Page finished her career with the Los Angeles Sparks from 2006-08 where she played off the bench.

And those are the updated rosters for the All-Time Mystics first and second teams. I don’t think there are too many controversies with the players on this list. However, I definitely can see many people take issue with Meesseman’s Finals MVP performance “not being enough” to overtake Langhorne for a spot on the first team. A poll on that is at the bottom of this post.

It will be interesting (and fun!) to see how this list holds up or changes over the next few seasons as the Mystics continue their winning ways into 2020 and beyond.