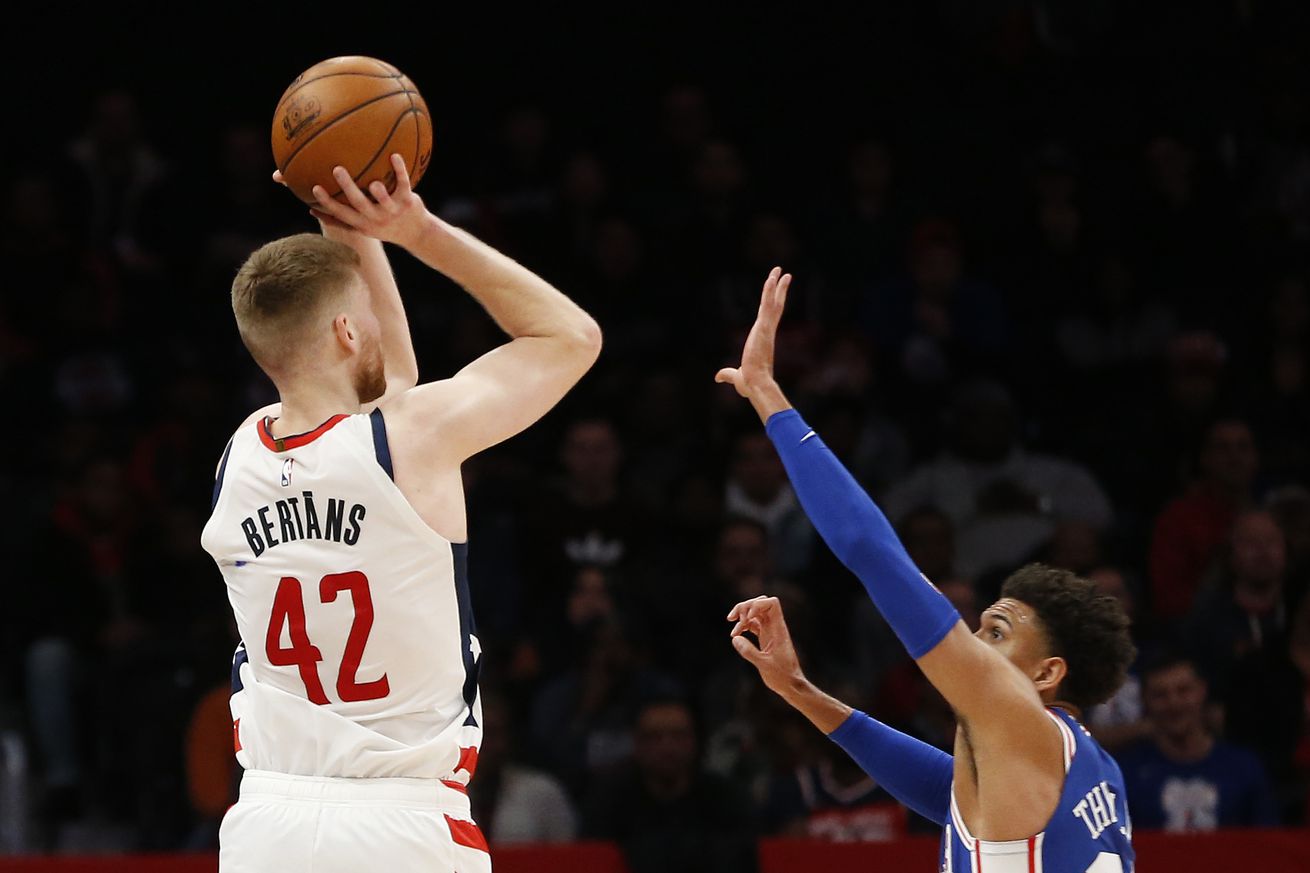 Let’s take a look at the Washington Wizards’ play since November and track what things have been helping their play, and what hasn’t.

The Wizards have been up and down the past few weeks that has included a west coast road trip and a big upset over presumable Eastern Conference contending Philadelphia 76ers. Let’s get into it!

Davis Bertans has been on quite the heater lately. His standout performance came against the Charlotte Hornets on Dec. 10 where he scored a career-high 32 points, including shooting 8-of-12 from three. Bertans’ presence completely changed the complexion of the game. The Wizards were down by as much as 16 in the 3rd before he got hot and made it a game.

But that game wasn’t the only game where Bertans was hot behind the arc. In the eight games thus far in December, he only failed to make 3 or more 3 pointers once, and that came this past Saturday against the Grizzlies. His play has left a lot of fans wondering if the Wizards should try to sell high to obtain some futures assets or to try to see if they can keep long term. Either way, it should continue to be an interesting season for Bertans.

The Wizards have been exceptional this season moving the ball. They are currently second in the NBA for team assists per game. What makes this stat even more amazing is they do not have anyone on the roster who is averaging more than 7 assists per game. They are getting open looks by playing an unselfish brand of basketball, where the ball moves well and they get a lot of great looks, which has also contributed to them being a top-5 offense for much of the season thus far.

This was supposed to be the season that Troy Brown established himself as a key rotational player, but instead he has struggled for most of the season. He started out the season with a calf injury, but once he came back he was given the opportunity as a starter and simply did not produce, which resulted in him losing that spot to Issac Bonga.

It is clear that Brown’s skill sets aren’t really best used as a 3 and D type of wing, the role Scott Brooks has put him in so for. He is only shooting 24 percent from 3 this season. Brown struggled as a spot up shooter and doesn’t really get into the flow of the offense, playing off the ball, often enough to get him touches on offense. Not to mention, he has had some bad moments on defense as well.

Going forward, the Wizards will need to find a way to engage Brown more in the offense. In high school he was a point guard. And during his time at Oregon, Brown’s ball handling and abilities to thrive in pick and rolls were the reason why he was thought of as a potential productive NBA talent.

Whether it is TBJ’s fault or it’s the Wizards organization, together they need to figure out how to make Brown become more reliable rotational player.

It has been theorized by some that Bradley Beal’s decline in three point shooting could be associated with being asked to facilitate and create more than he has in earlier parts of his career, which has taken away more catch-and-shoot opportunities. Looking year-by-year at his numbers, including this season, Beal always has been a significantly better three point shooter on catch-and-shoot opportunities compared to pull-up point shots.

Whatever you attribute to his shooting problems, Beal is just shooting 33 percent from 3 on this young season. If those numbers hold, this would be the third straight year his percentage from deep declined. However, in each of the last three seasons including during this one, John Wall has missed significant time.

I am certainly not suggesting that Beal needs Wall (Beal is already an all-star in his own right), but it certainly does not hurt having a player take some of the facilitating duties out of his hands and allowing him to take more threes in catch-and-shoot situations.

We already knew John Wall would miss most or all of this season since last February. But since then, Washington still suffered more injuries. Just in the past few weeks they have lost C.J. Miles who is out indefinitely, Isaiah Thomas (who just returned on Monday), Moritz Wagner, Rui Hachimura, Thomas Bryant, and Jordan McRae. The Wizards are already in a quasi-rebuilding year, so losing key players does not help at all.

With the injuries piling up, they have had to give larger roles to some relatively unknown players which isn’t bad. But the team is currently struggling losing 7 of their last 10 games, often with players who probably don’t have long-term futures in Washington.

The Wizards’ upcoming games over the next 30 days could impact on what they do at the trade deadline in February. It’s crazy to say, but at one point not too long ago the Wizards were only a half game out of the 8th and final playoff spot. Now, they are three and half games back. If they continue to drop, it may be an easier decision to start attempting to trade off expiring veteran contracts instead of trying to making an increasingly unlikely playoff push.