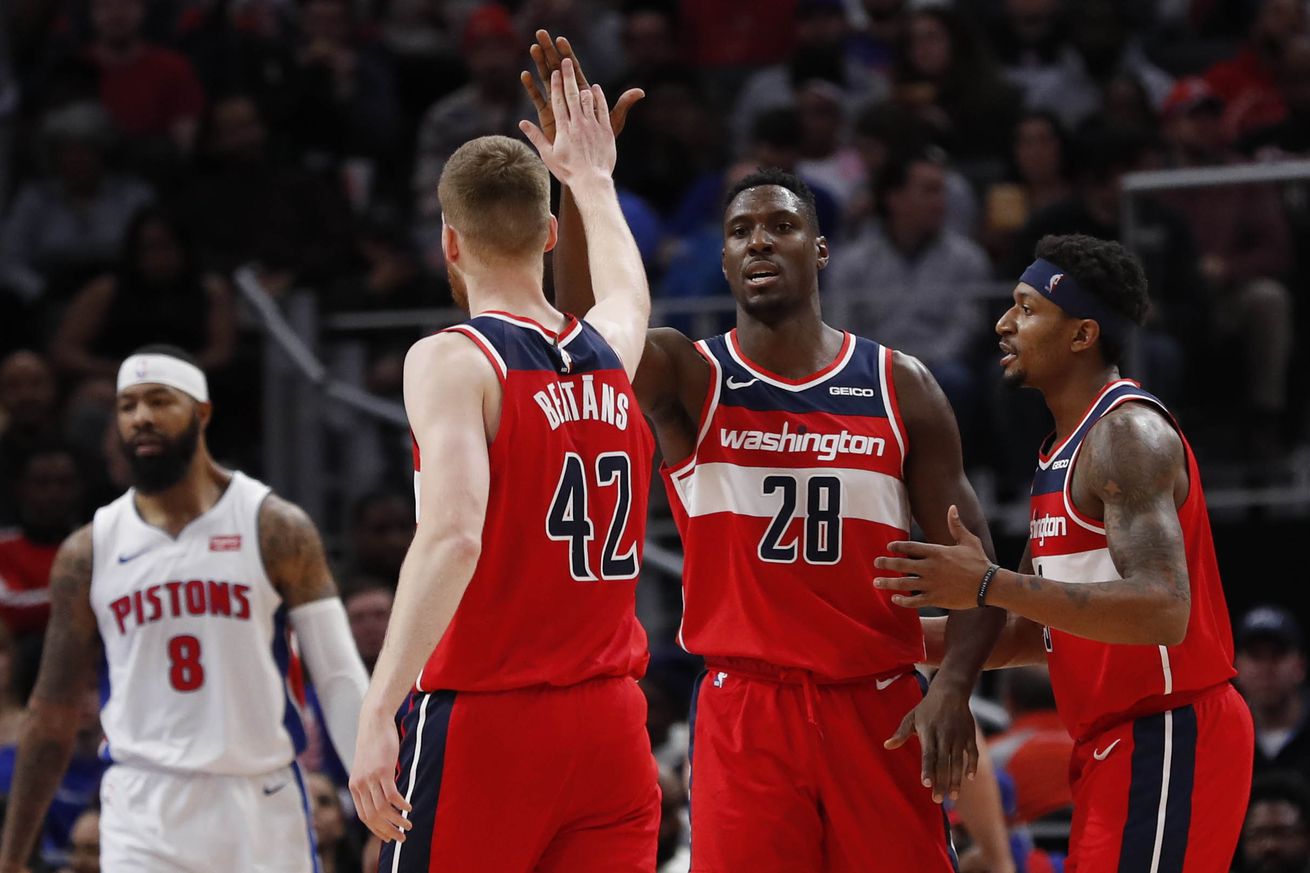 Washington snapped their four-game losing streak Monday night, taking down the shorthanded Pistons in Detroit, 133-119. Bradley Beal broke out of his mini slump to lead the Wizards with 35 points and 10 assists and Isaiah Thomas, who played for the first time in two weeks after being sidelined with a calf strain, scored 23 points including some timely buckets in the fourth quarter to seal the victory late.

Before the game, head coach Scott Brooks said the Wizards had a great practice on Sunday. That was apparent the way they started this one. Washington started the game 6-8 from the field to take an early lead against the Pistons who were playing without Andre Drummond and Blake Griffin. The Wizards shot a blazing hot 17-21 from the field in the first quarter to take a 43-31 lead they wouldn’t relinquish the rest of the night.

Detroit was able to pull within two midway through the fourth quarter, 109-107, but some buckets from Thomas and Beal put this game on ice.

Hot shooting in the first quarter sets the tone

Washington’s offense has been stellar so far this season, and during the first quarter tonight, things clicked even more so than they usually do.

The Wizards connected on 12 of their first 14 field goal attempts including a stretch of nine straight. Beal set the tone with 15 points (6-9 shooting) in the first quarter to go along with six assists. Rookie Rui Hachimura was a perfect 3-3 from the field in the opening period, including a putback dunk, a nice drive for a reverse layup, and his patented mid-range jumper. Davis Bertans and Thomas also got in on the fun, knocking down both of their field goal attempts in the first.

Washington put up video game-like numbers — 81 percent shooting on 17-21 field goal attempts. The Wizards also knocked down all three three-point attempts and were a perfect 6-6 from the charity stripe.

Beal has a bounce back night

Beal had been struggling the past few games but snapped out of his funk this evening. He made it a priority to get others going early, and tallied five first quarter assists. It was then Beal’s turn to do some scoring, and he did it by attacking the hole and knocking down open three-point looks. He had 21 first-half points.

After a quiet third quarter where Beal scored just three points, he kicked things into gear. Refusing to settle for jumpers, he attacked the rim repeatedly and poured in 11 fourth quarter points.

Beal ended the night with 35 points on 12-24 shooting including knocking down 5-9 attempts from three-point range.

Washington gets contributions from some unlikely sources

Isaac Bonga hasn’t wowed the Washington faithful in any of his performances this season, but tonight he played his best performances of the season. Bonga scored 9 points and grabbed 6 rebounds, but more importantly, was active on the defensive end. The second year player had two steals, multiple deflections, and even dove on the floor a couple of times for loose balls in a game where the box score doesn’t tell the whole story.

With Thomas Bryant and Mo Wagner missing this one due to injury, Admiral Schofield had an opportunity to perform. The rookie played solid defense, ran the floor well and hit a three en route to 9 points in 20 minutes of play.