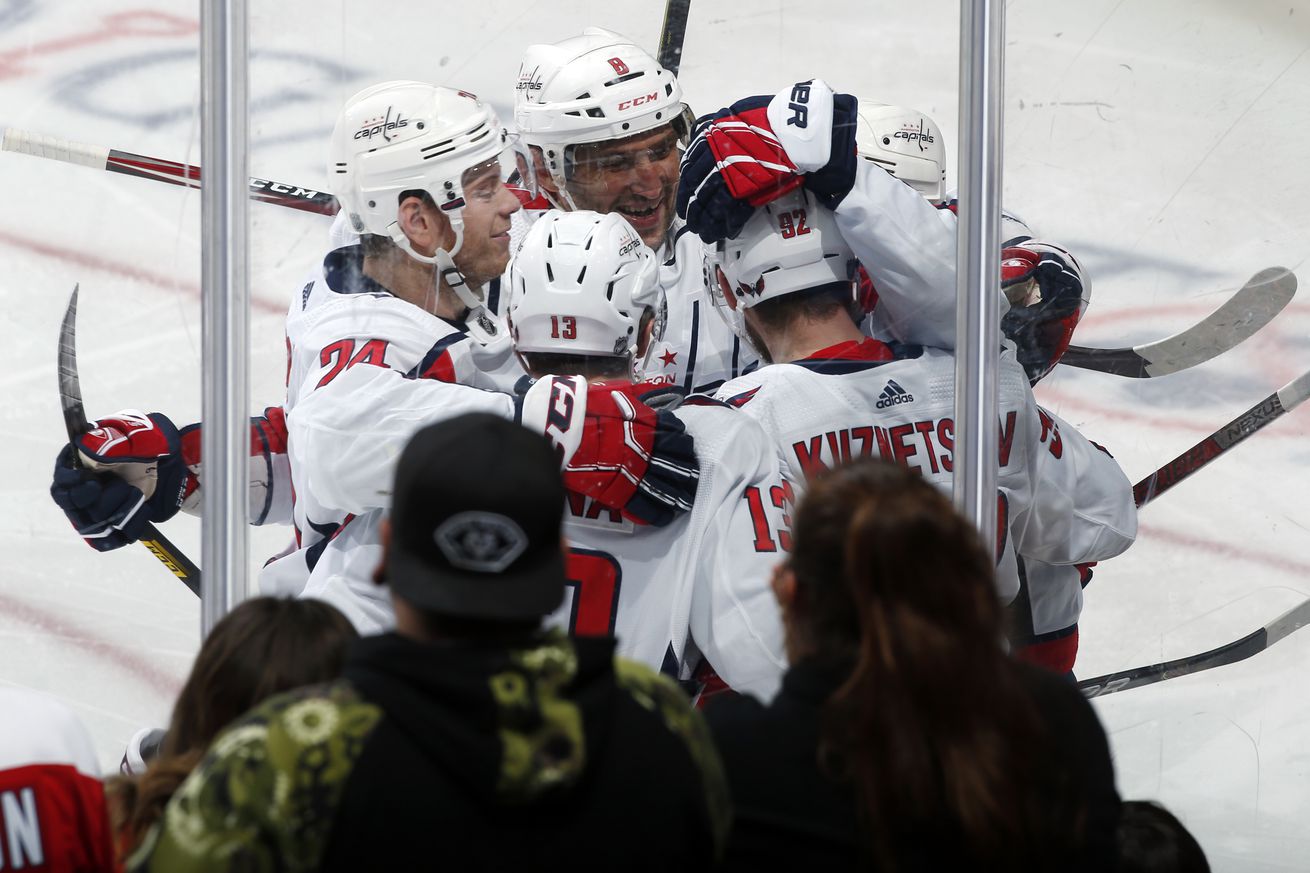 John Carlson extends point streak, Braden Holtby almost scores on his own net, and things get feisty at Honda Center

The Capitals were seeking their first 4-0-0 road trip since February 9-16, 1993, but the Ducks came into tonight having won the last three games against Washington at the Honda Center. Thankfully, the good guys held on for the win and a sweep of their California road trip with a 3-2 win. Most importantly, they all made it out of Anaheim alive and in one piece.

Plus: Travis Boyd is taking wonderful advantage of his increased time in the lineup, scoring his second goal of the season on a crazy angle shot.

Minus: The Capitals went 19-for-53 at the faceoff dot tonight. Oof.

And now, a very important question:

My sign and I are ready for the @Capitals game tonight pic.twitter.com/VCJCgdRnla

I think I’d go with 100 duck-sized hockey players (y’know, so I could punt them), what about you? Sound off in the comments below!

1. Right at the nine-minute mark of the first period, Travis Boyd got the Caps on the board first with one heck of a sharp angle shot. Boyd fired the puck from below the goal line and got a little help from Ryan Miller’s skate as it bounced back into the net. With Backstrom’s absence, Boyd is getting an extended look in the lineup and he is certainly making the most of it.

2. Garnet Hathaway and Erik Gudbranson gloves off alert! Here we go, a rematch! Or…not? The referees broke up the fight before it could happen, sending both skaters to their respective penalty boxes instead. They were each handed a ten-minute misconduct, but Gudbranson got the extra minor for unsportsmanlike conduct so the Caps went to their second power play of the night.

3. 16 seconds into that power play, Evgeny Kuznetsov made the Ducks pay with his 12th goal of the season. Kuzy is now on pace for 31 goals this season, which would be a career high. Additionally, take a wild guess as to who else recorded a point on this goal with a primary assist. Go ahead, guess. That’s right, John Carlson. That’s seven points in three games, ho hum.

4. About eight minutes into the second, Nicolas Deslauriers wanted to let Radko Gudas know that the Ducks were not pleased with Gudas’ earlier hit on Nick Ritchie (the hit itself was fine, but it was definitely a little late). How did he get his message across? By absolutely destroying Gudas in a fight. It wasn’t even close, oof.

Radko Gudas gets worked by Nicolas Deslauriers in a fight pic.twitter.com/hDIOBrAmXW

5. Cam Fowler was called for high-sticking on Jakub Vrana with 10:54 to go in the second, but T.J. Oshie got called for cross-checking 30 seconds later. Brendan Guhle totally whiffed on his shot from Braden Holtby’s right, but the puck bounced back to Sam Steel and he found the back of the net. However, the Caps’ video team said, “Not so fast!” They successfully challenged the play for offside and restored Washington’s two-goal lead. This was Washington’s first coach’s challenge of the season.

6. This is a thing that happened.

7. The Ducks got a goal to stay on the board with three minutes left in the second on Ryan Getzlaf’s shot past Holtby. A bad play from Brendan Leipsic led to a turnover in the Caps’ zone, and the Ducks were able to capitalize on the miscue. Hopefully the late goal won’t rattle the Capitals too much.

8. The Caps were sloppy with the puck in their own end and it came back to bite them. 45 seconds into the third and the game is tied on an Adam Henrique top shelf snipe. It was a bit of a broken play after a poke check, but the Ducks surely won’t complain.

9. The Ducks were sloppy with the puck in their own end and it came back to bite them. Less than a minute after Henrique’s tally, Jakub Vrana was there to put the Caps back in the lead. That’s 15 goals for Jake the Snake all at even-strength, which is tied for the league lead with Leon Draisaitl and Brad Marchand. 3-2 good guys.

10. Hathaway versus Gudbranson take three! The refs let them go this time, and they…kind of disappointed, to be honest. “Bout” is a bit of a strong word for this matchup, it was more of a…scuffle.

Up next for the Caps: some home cooking before Monday’s Metro match-up against the Columbus Blue Jackets at Capital One Arena. Fingers crossed Backstrom is healthy and ready to return for that game.