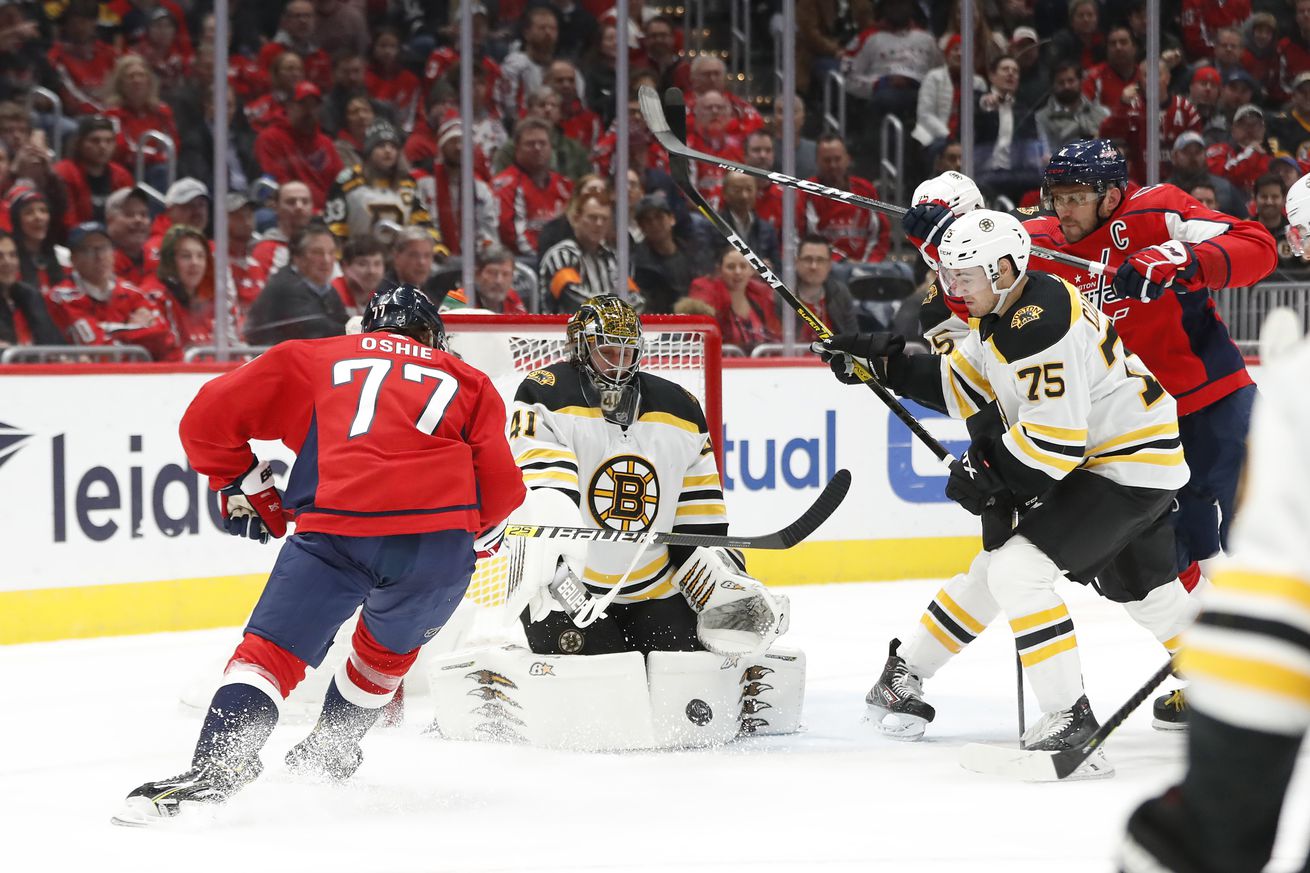 In tonight’s tilt, the two top teams in the league faced off for the second time this season. A flurry of goals in the second period from TJ Oshie lifted the Capitals past the Bruins in a 3-2 win.

The Capitals improved to 16-1-0 in their last 17 games against the Bruins. Talk about consistency.

Plus: Braden Holtby stayed frosty against the Bruins tonight, improving to 18-3-0 all time against Boston.

Minus: Unfortunately, Alex Ovechkin did not score four goals to catch David Pastrnak in the goal-scoring race.

Backstrom: NBC replayed me hitting you 10x already, so I’m going to make it look like I’m asking you if you’re ok pic.twitter.com/b5dgDcQp7c

1. It’s Holtby vs. Halak in net tonight. Tuukka Rask has yet to face the Capitals this season, and will likely suit up against division rivals the Tampa Bay Lightning tomorrow (or he’s still frosty from yesterday’s practice scrimmage).

In a top line matchup, the Capitals come out of the gates looking sharper than the Bruins. They get a few good looks at Jaroslav Halak early on thanks to some flatfooted B’s.

2. Charlie McAvoy dishes, but Pasta scores. David Pastrnak scores his 26th goal of the season just under halfway through the first period to put the Bruins up 1-0.

3. Zdeno Chara and Tom Wilson are fighting, apparently. Did you know Zdeno Chara is seven feet tall on skates? I did know this and personally, this information would make me not want to fight Chara. Wilson gets the extra minor for cross-checking and the Bruins are on the power play.

4. Jakub Vrana gets whistled for tripping at 14:17 and the Bruins go back to the man advantage. Patrice Bergeron jabs the puck in down low for what appears to be the Bruins’ second goal of the evening, but the Capitals challenge for offside and it’s called off.

5. John Carlson nearly sets up Alex Ovechkin for a goal in the waning minutes of the period, but Ovi can’t get a stick on it. It’s 1-0 Bruins going to the intermission, but the Caps have left over power play time to start the second.

Intermission thoughts: you all saw Tim Thomas, too, right? Like, he was definitely there, in the public, at a Caps game?

6. The Capitals make up for a questionable start to the period with a power play goal from TJ Oshie, assisted by none other than MVP (in our hearts) John Carlson. It’s just under five minutes into the period and already we’re tied at 1.

Almost heaven…Warroad, Minn.? Oshie splits the Bruins D to get his second goal of the evening just 3:30 later, putting the Capitals up 2-1. Carl Hagelin gets the assist.

7. The Bruins outshot the Capitals 15-7 in the second period, but the Capitals came out with the lead. Both teams get some looks in the latter stages of the period.

8. It ain’t over til it’s over – the Bruins tie it up at 2:53 of the third period. Sean Kuraly scores on a deflection on a Torey Krug shot.

But before the ink can dry, Carlson restores the lead with his 12th goal of the season less than two minutes later. Caps are up 3-2.

9. The Capitals are back on the PK after Carlson gets whistled for tripping against Pastrnak at 6:04. Bruins can’t convert, and the Caps PK keeps them at 0/5 on the evening.

10. Death, taxes, Braden Holtby and the Capitals beating the Bruins. Y’all know the drill by now, I’m sure. The Bruins pulled Halak in the waning minutes of the game but the Caps couldn’t get the empty netter.

Up next: the Capitals head to the sunshine state to face the Tampa Bay Lightning on Saturday.