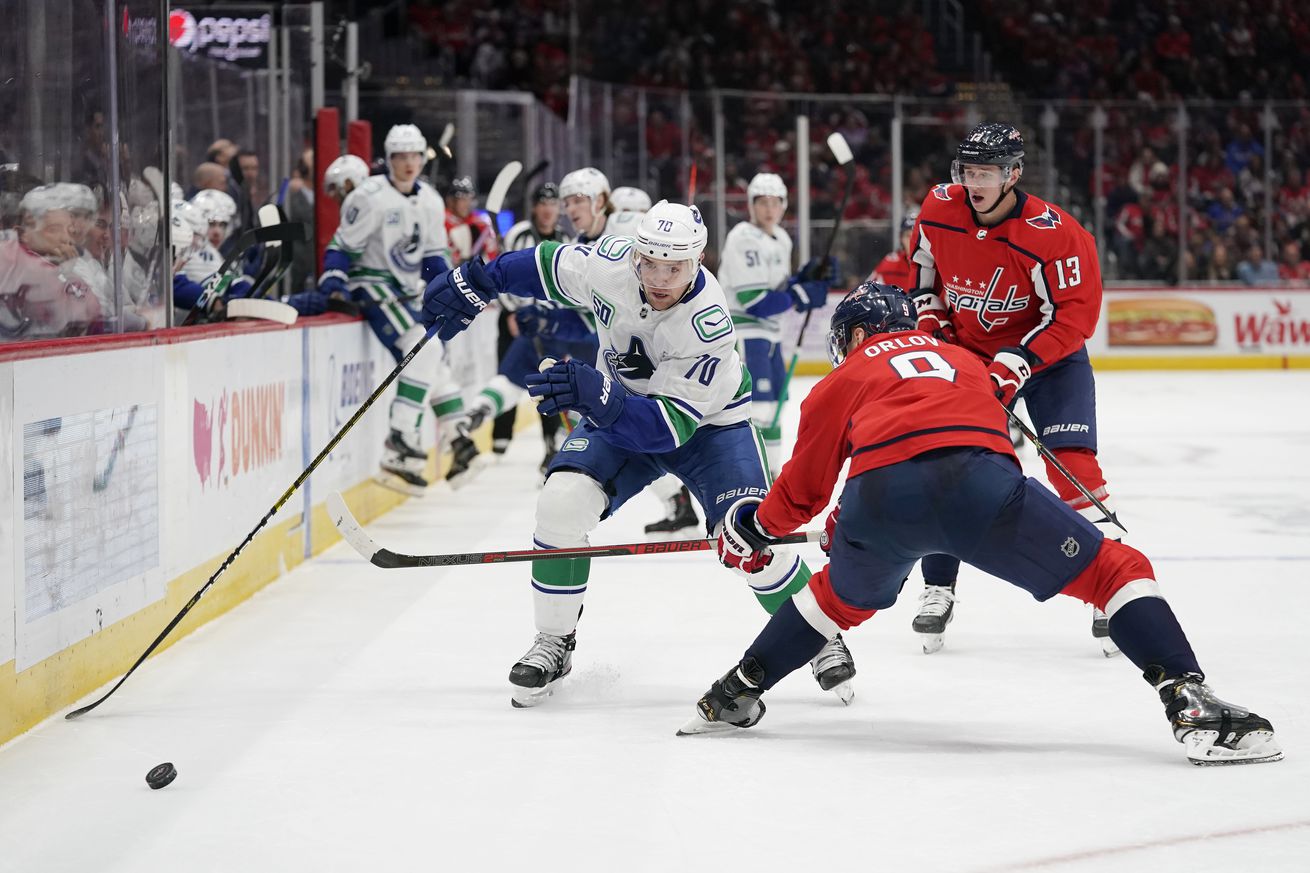 The Washington Capitals lost to the Vancouver Canucks 2-1 in a shootout on Saturday afternoon after Lars Eller’s goal was overturned in the fifth round.

The Washington Capitals welcomed their crunchy West Coast cousins the Vancouver Canucks to Capital One Arena for a weekend matinee. Would it be a comedy, or a horror?

Plus: Jakub Vrana continues to shine, and tease Capitals fans with what his “ceiling” might possibly look like.

Minus: The difference between one point and two is the width of a crossbar. More on that below.

1. Washington would take the ice once again without forwards Nicklas Backstrom, Carl Hagelin, or Nic Dowd. Could the call-ups from Hershey continue to keep the Caps above water in their absence?

2. And despite signing autographs for fans at Medstar Capitals Iceplex earlier this week, Jay Beagle would unfortunately miss this contest with a lower-body injury. Get well soon, and we love you, Beags!

3. Jake the Snake Vrana found himself all alone in Mr. Ovechkin’s Office very early in this contest, catching the Nucks napping. He dispensed with Ovi’s business quite admirably, blasting a dead-ringer one-timer from the circle to put Washington up 1-0 almost from the get-go.

4. But our sins always catch up with us, and with Richard Panik and Chandler Stephenson both in the naughty box, Vancouver connected on the 5-on-3 chance as wunderkind Elias Pettersson knotted this contest up at 1-1 with 5 minutes left, and the first twenty ended tied.

6. Chandler Stephenson nearly made the play-of-the-season in the third period, taking a shot from his knees on a breakaway a la EA Sports NHL, but only got goalie pad, and this game went to overtime.

7. In the extra frame, Evgeny Kuznetsov took a smart hook on Christopher Tanev to potentially save a goal, and the Capitals had to kill a gnarly 4-on-3 in OT. They managed to do so, and held on to get back to even strength.

8. And despite a frantic flurry of shots and whacks from T.J. Oshie and Alex Ovechkin in the dying seconds of this game, this one went to a shootout.

9. In the fifth – yes, the FIFTH – round, Lars Eller finally scored for the Caps….or so it seemed. The situation room in Toronto overturned the goal, claiming that it merely bounced off the post, then up and out off the crossbar (Canadian bias, anyone?), and these two teams kept slugging.

10. And in the bottom of the seventh round, Vancouver captain Bo Horvat struck for the Canucks, and sent the visitors home winners.

The Capitals get a point out of this contest, but will want that second point back that bounced away from them off the crossbar’s fickle whims.

Next up is the Florida Panthers (and Brett Connolly!) on Wednesday.