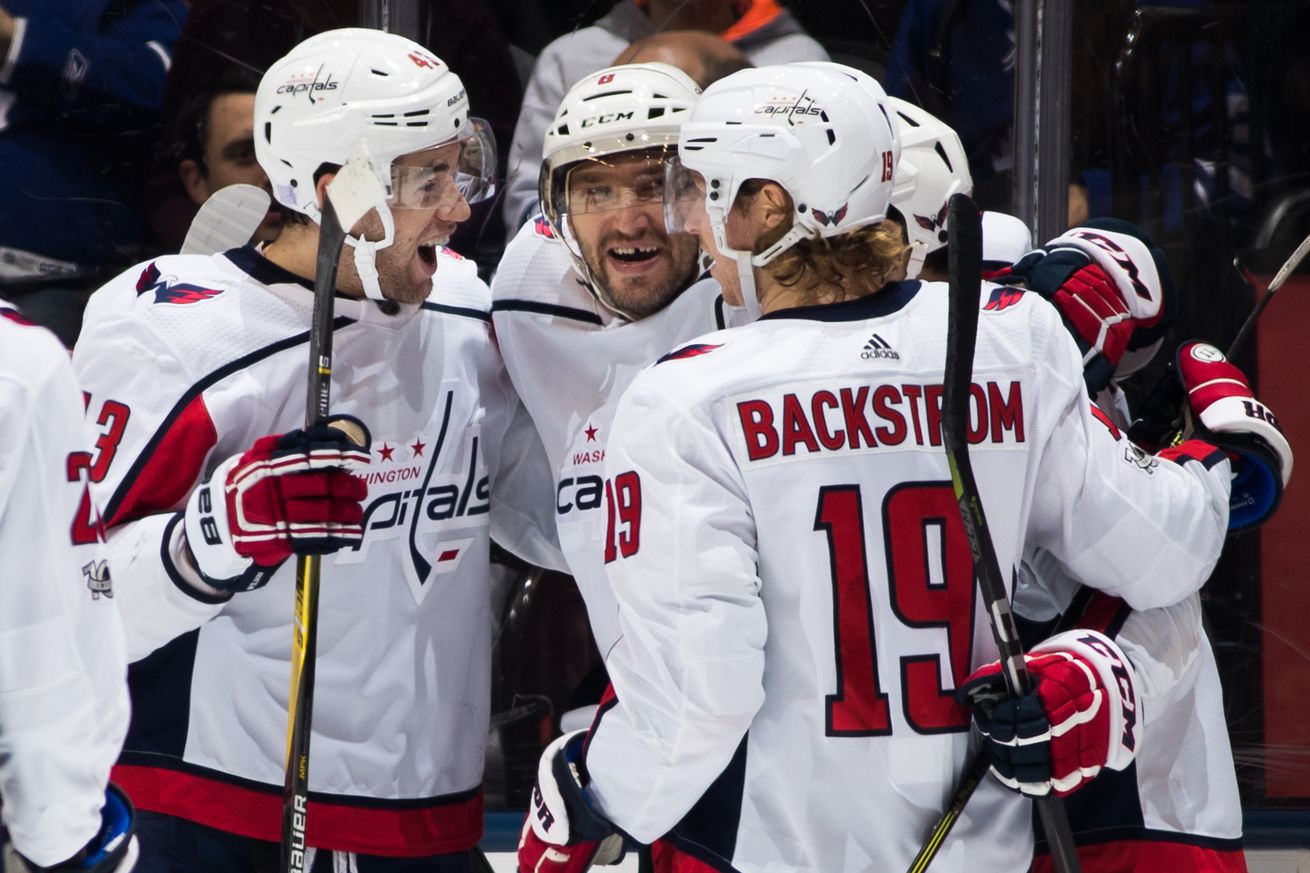 More than two months into the season, the Washington Capitals are on top of the league standings by four points. They also rank in the top third in many of the major team stats: third in goals per game (3.48), 11th in goals against per game (2.80), seventh-best power play (22.6%), fourth-best penalty kill (85.3%), 11th in expected goals-for percentage (51.87%), and the fewest regulation losses (6). It’s all impressive to say the least.

But the Capitals could and should be better. How so? By optimizing their lineup to fit their strengths. Let’s take a look at what they are using now.

All stats provided by NaturalStatTrick and all visuals from HockeyViz.

The eye test may say that this line hasn’t looked all that good, but the numbers love them. They create a lot of offense, and though they aren’t amazing defensively they are still more than passable in that department. This line certainly doesn’t need to be changed to improve the Capitals.

Holy hell, that is one ugly line. Their HockeyViz Enviromental Distiller should be marked NSFW. And it doesn’t look any better when you take in their 160 minutes amassed together since the start of the 2018, they are still a horrific 36.23xGF%. If you want to fix something on this team, this may be the best place to start. It doesn’t help that they get more defensive zone starts than offensive, but still… those results are too bad to keep together.

This line is kind of a head-scratcher. Each player on this line is very strong individually at driving play, so the fact that together they haven’t seen the results one would hope for is confusing. It is only based on 51 minutes of ice time, however, so more than likely it’s something that will be straightened out the more they play together.

Is there a better fourth line in the NHL? Every time these three hit the ice it seems they spend all of their time in the offensive zone. They are pure energy, speed, and grit, with a dash of skill thrown in. There’s absolutely no reason to break these guys up, which is unfortunate for Travis Boyd who should be playing on someone’s bottom six.

As we explored last week, Kempny’s season has not been going all that well since returning from injury. He’s dragging down future Norris winning defensemen John Carlson by a lot; in fact he’s dragging the whole team down. When he’s off the ice the Capitals are playing much better hockey. It’s too early to tell if this is just Kempny getting his legs back after missing seven months with a torn hamstring or if this is who he is now because of the brutal injury. What we do know is he’s not a top-four defenseman right now and he should be relegated to the bottom pair until he regains his stride… or doesn’t.

How good is it to have Orlov back to his usual elite level? He had a very rough start to last season, (though some of that could be blamed on Matt Niskanen) but has bounced back in a major way. He never gets the attention he should for consistently driving play and leading the back end with a 56.34xGF% (12th in the league among defensemen playing at least 500 minutes). Jensen hasn’t lived up to his potential since coming from Detroit but it looks like he found a nice home next to Orlov. Could it be because he’s playing next to Orlov? For sure, but if it works it works. No reason to break up the best pair the Capitals have.

As Jensen seemed to have settled with Orlov, this pushed Gudas back with Siegenthaler. This has created a good, albeit not amazing pair that gets the job done defensively with some offensive pressure. For a bottom pairing it’s more than respectable, but, as you’ll see, Siegenthaler’s talents could be used elsewhere.

So as a whole, that team is pretty good (duh). The two areas that stick out like a sore thumb are the second line and top pairing. If the Capitals want to reach the level they are capable of, they should address these two areas. Here are some suggestions.

Over the past two years, this young, fast, highly skilled line has been fantastic; even better when looking at just this season (87 minutes 56.16xGF%). They really represent the future of this team’s offense, and the trio has a little bit of everything: Vrana’s shooting skills, Kuznetsov’s playmaking ability, and Wilson’s rough and tumble style that wins board battles (plus the vision to get the puck to the right players). And if you can find a line for Kuznetsov to be a part of that isn’t buried in scoring chances, it’s a keeper.

Much like the Capitals’ current first line, this line looks bad by the eye test. They are just so damn slow it’s hard for them to create chances going up the ice. But alas, they always seem to put up good underlying numbers. They are even better this season in their 193 minutes with 55.55xGF%. They are the slower version of Vrana-Kuznetsov-Wilson. Ovechkin shoots the puck, Bakcstrom passes it, and Oshie wins the battles to keep the play alive. This line also seems to get hemmed in their zone a lot because of the lack of speed, but once they are in the offensive zone they are a hard line to move out.

As stated above, this line isn’t doing too well, but it’s just hard to believe that these good possession players will continue to play so poorly. It’s only 51 minutes and should fix itself over time. If for some reason it doesn’t, they should look to inject Boyd into that line for some much needed offense.

Siegenthaler has been one of the biggest surprises in the Capitals system in a long time. He struggled in the AHL, but in the NHL he’s on the path to being an elite defensive defensemen. His size, speed, and smarts make him a shutdown machine on his own, and he and Carlson have been very strong together when paired up. Siegenthaler basically does exactly what a healthy Kempny did: takes care of the defensive side, which lets Carlson unleash his offensive abilities. In 130 minutes this season they look even better with a 56.45xGF%.

Like the Capitals fourth line, there’s no reason to mess with what’s working on the second pair.

You know how we talked about how Kempny needs to be pulled off the top pair because he was bringing down Carlson? Well, he’s also been bringing down Gudas, which is somewhat concerning. But again, it’s better than having him eat more minutes poorly. Let him play on the bottom pair until he hopefully fully recovers. And if somehow he doesn’t, there is another option in Hershey in Martin Fehervary alled back up. The Capitals brass love him and even Brian MacLellan mentioned how Martin will probably be called up at some point this season. Fehervary only played three games to start the season but he looked very good. In 31 minutes Fehervary and Gudas had a 65.04xGF%. Very small sample size but worth exploring.

Technically the best option for the Capitals top-four defensive pairs is to go with Orlov-Carlson and Siegnethaler-Jensen. That top pair has a terrific 61.21xGF% in 108 minutes this season, while the second pair has 54.61xGF% in 141 minutes over the past two seasons and a 55.28xGF% in 124 minutes this season. But it’s probably best not to put the Capitals two best defensemen on the same pairing, at least during the regular season. Maybe when things get tough in the playoffs they can put those two together.

As shown by the standings, the Capitals don’t need to change up their lineup much — after all, why mess with what’s keeping the team at the top of the league? But there are always ways to improve, small (or big) tweaks that can make a huge difference.

Luckily for the Capitals, all the answers seem to already be on their roster; they don’t need to go out and make some big trade. So when the time comes where the team will need to improve they have the solutions right in front of them.