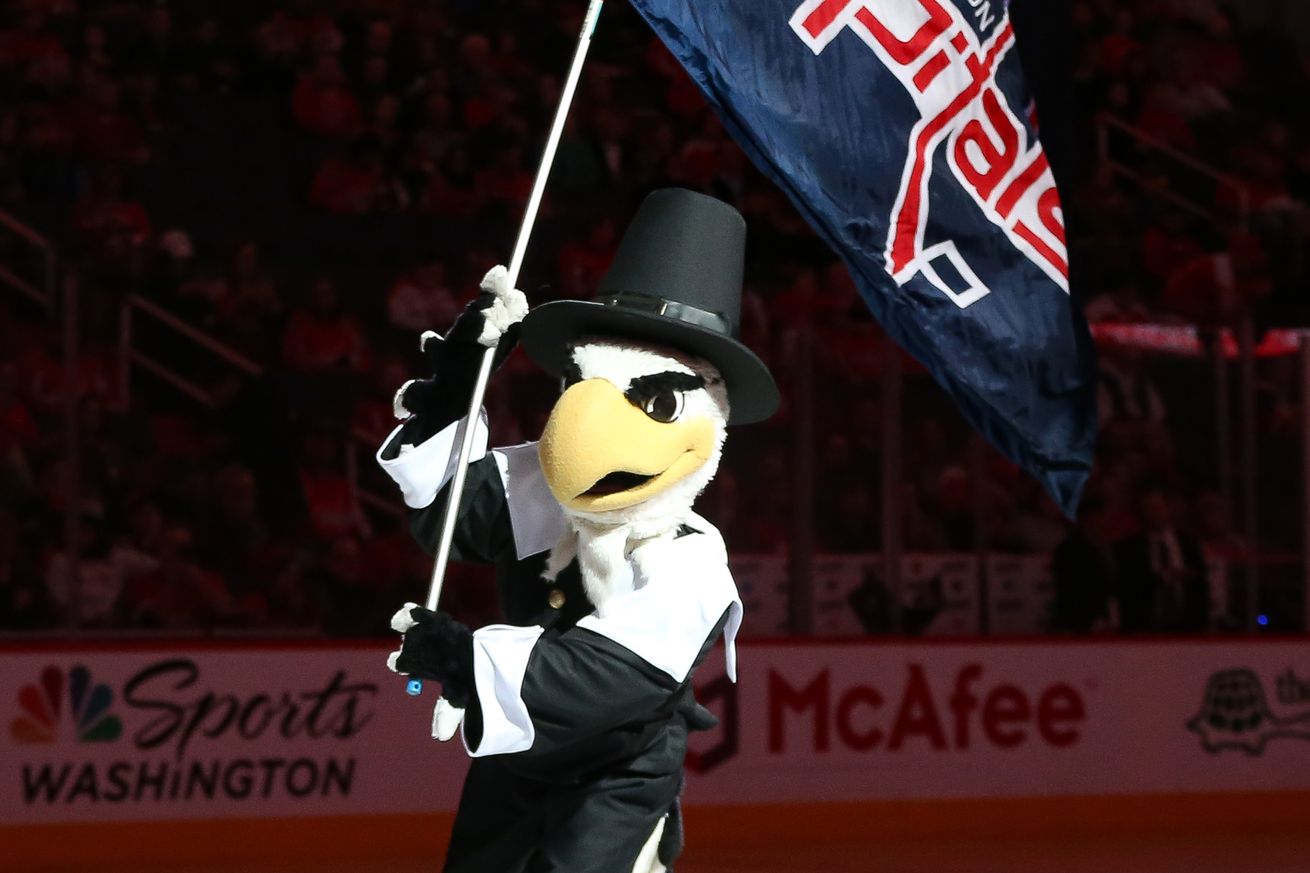 The Washington Capitals have a long and rich tradition playing games on Thanksgiving Eve. Here is a brief history.

One of the enduring traditions of Washington Capitals hockey is playing on Thanksgiving Eve. We thought we might give Caps fans some tasty appetizers to chew on as they prepare for the holiday feast, so let’s look at a brief history of the Caps on The Day Before Thanksgiving…

In 44 seasons before this one, the Caps took the ice 41 times on the day before Thanksgiving. Twice the team did not start the season in time to play on Thanksgiving Eve, in 1994-1995 and 2012-2013, both owing to work stoppages that delayed the start of the season until after the start of the new year. The other time was in 1995-1996, when the Caps were not scheduled for a Thanksgiving Eve game. The Caps played their last game before the holiday on Tuesday of that week, beating the San Jose Sharks, 3-2, riding goals from Stefan Usdorf and Steve Konowalchuk 28 seconds apart in the third period for the come from behind win.

Washington has faced 19 different teams in these games, if you include both Atlanta franchises (Flames, Thrashers). They skated against nine teams three times apiece: Atlanta (Thrashers), Boston, Buffalo, Chicago, Minnesota (North Stars, never the Wild), Montreal, New York Islanders, Ottawa, and St. Louis. When they host Florida on Wednesday, it will be the first Thanksgiving Eve meeting of the teams.

Washington has 13 multi-goal wins in the Thanksgiving Eve series and four wins by three or more goals, a 6-2 win over Boston in 1992 being the largest margin of victory (the only four-goal win in the series). On the other side, the Caps have suffered nine multi-goal losses, five of them by three or more goals, including three losses by four goals – 6-2 to the Atlanta Flames in 1976, 4-0 to the Chicago Blackhawks in 1979, and 5-1 to the Atlanta Flames in 2007.

That the Caps were awful in their early years is not news to Caps fans. Turns out they were rather awful on Thanksgiving Eve, too. In their first six seasons, from 1974-1975 to 1978-79, the Caps failed to win any of their six games played on the day before Thanksgiving. They did manage two ties, a 1-1 tie against the Minnesota North Stars in 1975 and a 2-2 deadlock against the Atlanta Flames in 1977, both at Capital Centre in Landover. They lost four games, all by multi-goal margins, to the North Stars (6-4 in their first Thanksgiving even game in 1974, in Minnesota), the Flames (6-2 in Atlanta in 1976), St. Louis (3-1 at home in 1978), and ending this era with a 4-0 whitewashing at the hands of Chicago in 1979.

Fit to be Tied

After the Caps were pasted by the Blackhawks in the 1979 Thanksgiving Eve game, the Caps went through an odd stretch in this game. Five straight seasons, from 1980-1981 through 1984-1985, the Caps played their opponents to a tie. Five different opponents – Detroit, the North Stars, Edmonton, Chicago, and Pittsburgh – five ties. They ranged from the defensive battle (for the period), a 2-2 tie with the Blackhawks in 1983, to a shootout (no, not the contemporary kind of shootout), a 7-7 tie with Detroit in 1980. Only one of those games was played on home ice, the 2-2 tie against Chicago in 1983.

Nothing beats a well-roasted bird gracing the table on the holiday, its golden brown skin a mouthwatering delight. And in the years from 1985 through 1993, nothing beat the Caps on Thanksgiving Eve. It was in this period that the Caps established the tradition of playing a game on the day before the holiday, hosting all nine of their opponents at Capital Centre/USAir Arena. They were not especially hospitable, posting eight wins and a tie in the nine games. The tie came against Boston in 1986, when Alan Haworth scored with assists from Greg Adams and Craig Laughlin mid-way through the third period to force the tie. In an era when overtimes were played, but there was not shootout, the teams failed to score in the extra period and went their separate ways with the tie.

Despite the low-scoring tie with Boston, the Caps hardly lacked for offense in the other eight games, all wins. Six times they scored five or more goals, topped with a seven-goal effort against the Islanders in 1988. Seven of the eight wins were of a multi-goal nature, making this the dominant era of Thanksgiving Eve games for the Caps. And, if you combine this with the previous era, the Caps went undefeated in 14 consecutive Thanksgiving Eve games (eight wins, six ties).

The Years that Time Forgot

The Caps went two years without playing a Thanksgiving Eve game. It was not on the schedule in 1994, owing to the 1994-1995 lockout, and again in 1995, the only time in Caps history it was not on a full regular season schedule. When the tradition resumed in 1996, it was the start of a period in which there was little to remember. In 11 games from 1996 to 2007, straddling the 2004-2005 lockout, the Caps went 4-6-1. They did sample the buffet enthusiastically, facing eight different teams over the period, skating against Buffalo, Tampa Bay, and Atlanta (the Thrashers) twice apiece.

At least the Caps could muster better efforts on home ice in these 11 games. Not good, better. They lost both road games in this period, a pair of 5-2 losses in Buffalo, in 1999 and again in 2003. In home games, the Caps did post a 4-4-1 record. The overall record was, as one might imagine, a combination of iffy offense and worse defense. The Caps did managed to score five goals in two of the first three games in this era, but split the decisions, a 6-5 loss at home to Montreal in 1997 and a 5-4 loss to Pittsburgh the following year. However, in only one of the last eight Thanksgiving Eve games of this period did the Caps score more than three goals, a 4-2 win over Calgary in 2002.

On defense, the Caps were in an early food coma. Seven times in the 11 games they allowed four or more goals, four times allowing five or more, the worst of which was six to the Canadiens in that 1997 game.

One of the most consequential games in the recent history of the Capitals took place on a Thanksgiving Eve. It might have been the holiday horror out of which a great feast was born. Washington opened their season with a 6-13-1 record when the Atlanta Thrashers came to town. The Caps, having endured a series of frustrating seasons in an effort to rebuild the team, were making little progress, and things were fraying on and off the ice. On this night before Thanksgiving, fewer than 12,000 fans were announced to have sat in attendance to watch a team on a three-game losing streak. They were not happy when the Caps lost ugly, dropping a 5-1 decision to the Thrashers and voicing loudly their displeasure with head coach Glen Hanlon by game’s end.

The following day, Hanlon was relieved of his duties, and Hershey Bears head coach Bruce Boudreau was elevated to the head coaching position in Washington. It was a turning point in the team’s history. Since that coaching change, no team has more regular season wins than the Caps (565), no team has more standings points (1,241), and they have deployed the league’s most consistently lethal power play (22.4 percent). But those are facts for another story, another time.

After that landmark game in 2007, the Caps returned to being a playoff contender after spending several years selling off parts and rebuilding the team, reaching the postseason in 2007-2008. Coincidentally, the season that followed, with the Caps established as a playoff contender, started a period of success in this game that continues to the present. Since 2008, the Caps are 8-1-1 in ten games on the day before Thanksgiving (they did not play in the abbreviated 2012-2013 season).

The Caps have played nine different teams in this ten-game span, facing only the Winnipeg Jets twice, winning both games at home, once by a 4-3 margin in 2013 and again in 2015 by a 5-3 score. In eight games on home ice in this span, the Caps have seven wins, their only loss coming in 2013 to Ottawa, 6-4.

In this “Rock the Red” era of Caps hockey, scoring has not been a big problem. Seven times in the 11 games, and the last four in a row, the Caps posted four or more goals. Only once did they allow four or more goals, that 6-4 loss to the Senators in 2013 being the exception.

The Caps will go into their Wednesday night game having won four straight Thanksgiving Eve games, all on home ice. It has been a long tradition in the making and recently, a happy one. Here is to another happy moment in that tradition, and a happy and safe holiday for all fans of the Rink.