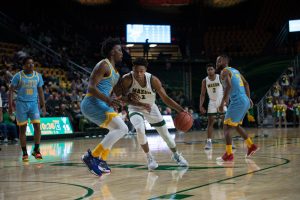 Mason improved to 4-0 for the third time ever as a program after an 83-70 win over JMU. A win Tuesday against Loyola (Md.) would set the record for the best start in program history.

Here are three takeaways from the game:

AJ Wilson and Greg Calixte combined for a block bonanza

AJ Wilson had five blocks and Greg Calixte had four. The pair combined to block 12.5 percent of the Dukes shot attempts.

Wilson and Calixte were able to assert their dominance on the defensive end, something that will be game-changing if it can continue throughout the season.

Getting your shot blocked leaves a lasting imprint in the mind of the shooter and prevents points from getting on the board. Mason will benefit tremendously if these two can continue being a two-headed shot-blocking machine.

Goanar Mar made an impact once again

After a successful freshman campaign, Mar struggled and was injured last season. Coming off the bench he contributed nine points, on 4-7 shooting, two rebounds and one steal in 21 minutes.

With two members of the team battling injuries, a reemergence of Mar could go a long way in providing depth, experience and quality minutes coming off the bench.

For the first time this season, Mason has made more than six threes in regulation. Javon Greene and Jamal Hartwell II both contributed three, and Xavier Johnson and Goanar Mar added one more each.

Only time will tell if this will be a consistent part of the team’s bag of tricks, but with a lot of unknowns this season, improvements are everything at this point.

Mason wraps up their five-game homestand Tuesday at 7 p.m. when Loyola (Md.) comes to town.