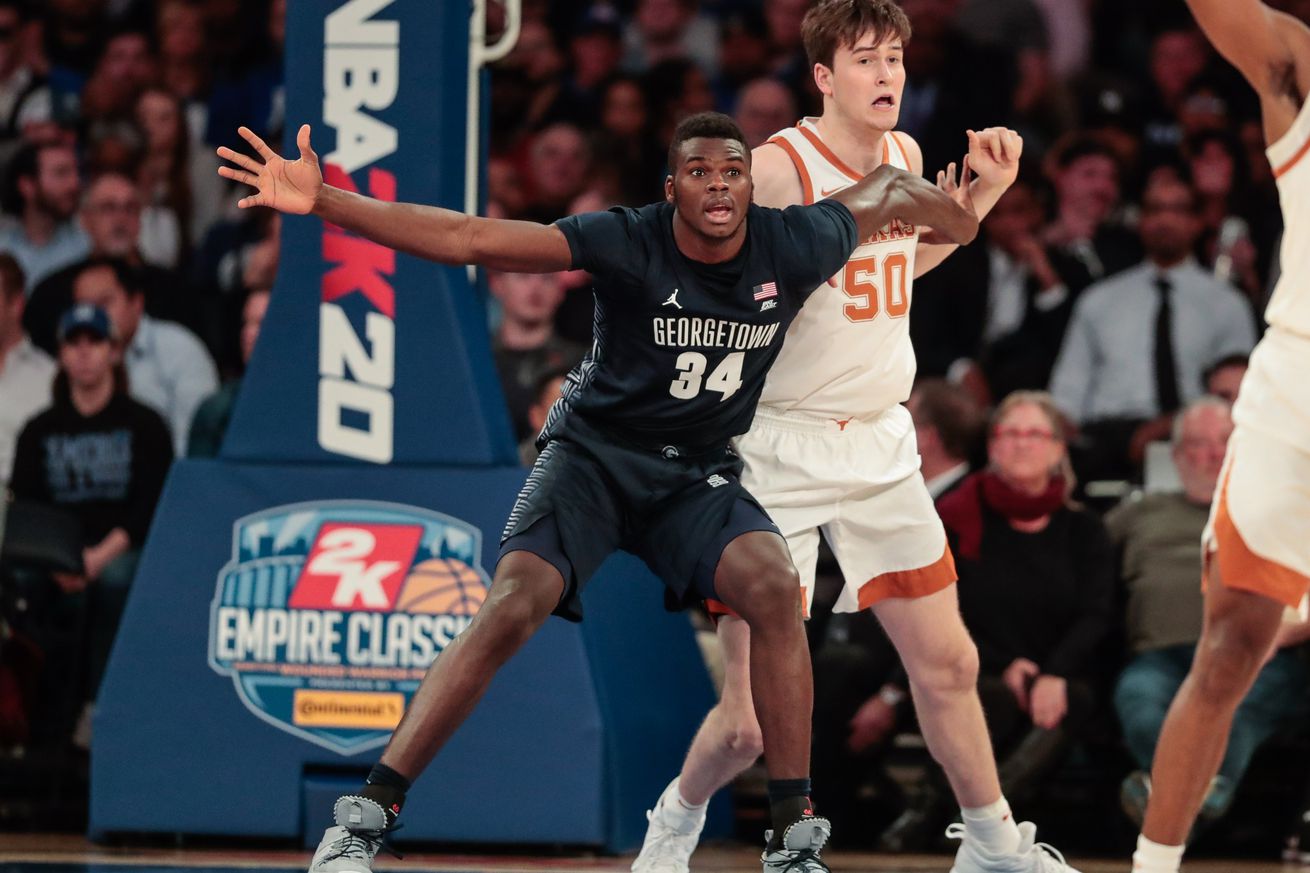 If you haven’t signed up for ESPN+ you can do so here!

Believe it or not there is more basketball to be played after all of the off the court news that has dominated Georgetown’s world since Monday evening.

About the only thing that we know for sure is that James Akinjo and Josh LeBlanc will no longer be with the program as the Hoyas take their first ever trip to Stillwater to face Oklahoma State. Both players requested a transfer as was announced by the University on Monday and then further explained in a statement by Athletic Director Lee Reed on Tuesday.

That’s all we know for sure. That’s it.

As has been reported by many outlets both Myron Gardner and Galen Alexander have appeared in allegations that could possibly affect their status. That’s probably the biggest question going forward and without a statement by coach Patrick Ewing or the team, we probably won’t find out until some pre-game tweeting as to whether or not they are with the team and eligible to play.

So, for the moment let’s just stick to basketball here. There are plenty of other places to check out all of the off the court stuff both on this site and elsewhere.

Ironically enough one of the issues so far this season has been that with a deeper bench, Ewing has struggled to get the right combinations of players on the court. Georgetown’s best half of the season came in the second half against Texas when he went from 11 to nine guys. Well, now it’s down to nine for at least the moment of this post. Clearly losing two of your top four or five players is an issue but there is still enough to work with to be competitive.

What’s Plan B for Ewing?

It’s going to be impossible to just plug another player in for Akinjo but there is talent on the roster. This isn’t a next man up situation. This is a situation where Ewing needs to try and figure out the strengths of the remaining players and figure out how to best win the group that he’s left with. After the Greensboro loss, Ewing admitted that his team needs to be scoring in the 80s rather than the 60s to consistently win. This might not be a thing anymore, specially if Omer Yurtseven or Mac McClung have an off night. So how can Georgetown win lower scoring games?

I’m guessing that Terrell Allen slides in for Akinjo and you go from there. This leaves you with a bench of Jahvon Blair, Gardner & Alexander (we think) and Qudus Wahab. Is it possible that Chuma Azinge or Jaden Robinson gets a chance? Probably not unless there’s foul trouble OR if Gardner & Alexander are unavailable for off the court reasons.

Will we see a big lineup at times?

There are two freshman scholarship players on the bench in freshmen Malcolm Wilson and Timothy Ighoefe. Since Wahab has shown well, is there a lineup that includes both him and Yurtseven on the court at times? This would require Yurtseven to step his game out to the perimeter a bit. So far, the N.C. State transfer has been mainly on the block. If he does extend further out there might be some minutes for one of the yet to be used freshman at times.

Who will step up?

I think the answer to this question has to be Jamorko Pickett. Pickett has gotten off to a solid start so far but if this team is going to succeed, he needs to improve on what he did his freshman year when he made the all-rookie team in the league. The minutes will be there and now one of the ball dominant players is out of the picture. Pickett has to be more aggressive offensively to go along with being on the team’s best defenders.

The Cowboys are ranked No. 25 in the Coach’s Poll after winning the NIT Season Tip-Off. Last year Oklahoma State finished just 12-20 and 5-13 in the Big 12. Led by Yor Anei and Isaac Likekele, Oklahoma State dismantled both Syracuse and Ole Miss at the Barclays Center.

Coach Mike Boynton’s team held both Syracuse and Ole Miss to a combined 29 percent shooting and just nine 3-pointers. The Cowboys 78-39 win over the Rebels was their largest margin over a Power 5 school in 25 years.

Akinjo is set to become just the second ever Big East Freshman of the Year to transfer after winning the prestigious award. The only other time it happened was in 1997 when Scoonie Penn left Boston College after his sophomore season and followed coach Jim O’Brien to Ohio State.

The point guard out of Oakland, CA. became the seventh Hoya to win the award after leading the conference in assists last season. Five of the previous six winners played in the NBA including four first rounders highlighted by Ewing and Allen Iverson.