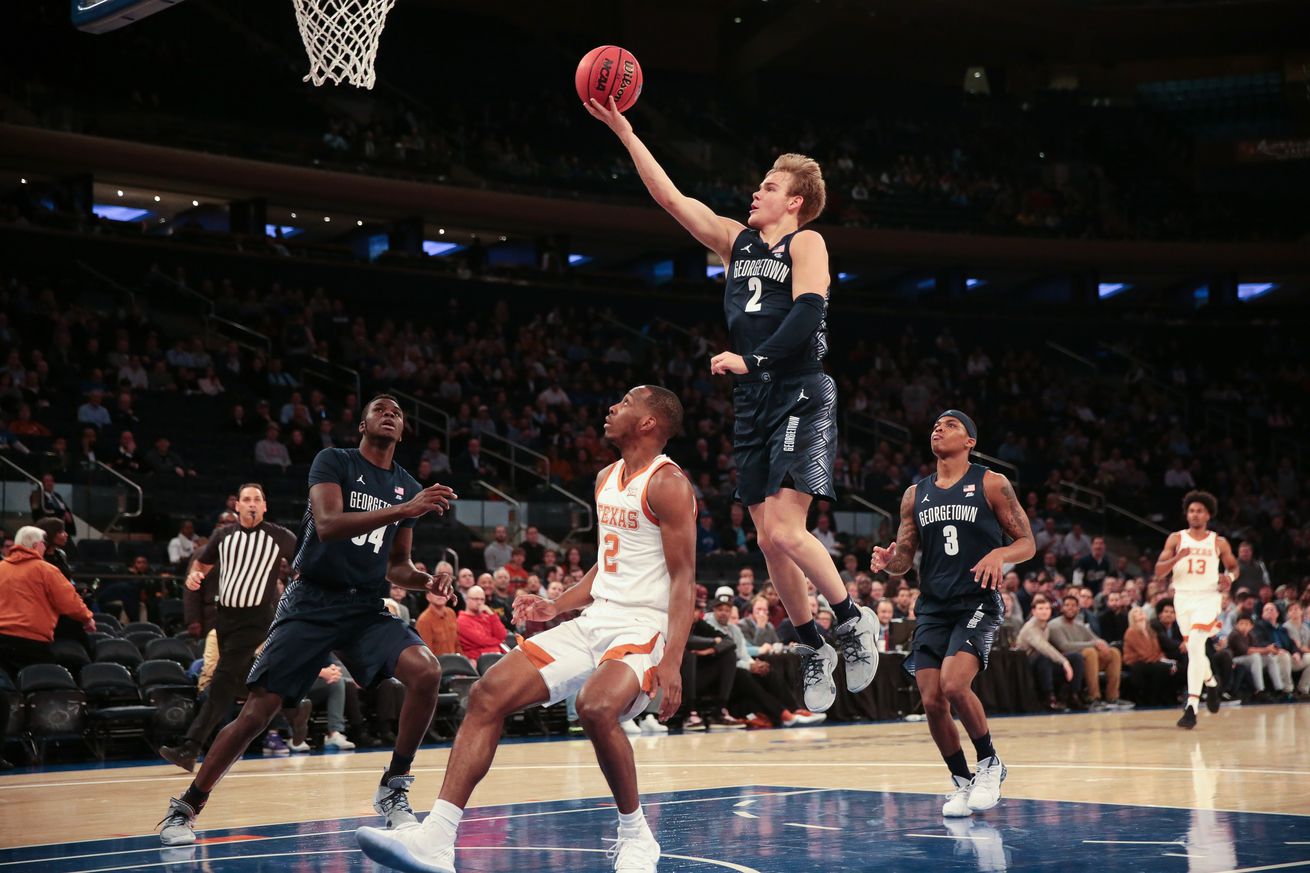 Georgetown hopes to make its first visit to Moody Coliseum a successful one on Saturday as the Hoyas play at SMU in a second straight matchup against an undefeated squad.

The Hoyas took down the previously undefeated Oklahoma State Cowboys on Wednesday night behind a season best 33-point performance from Mac McClung. Omer Yurtseven finished with 19 points and grad transfer Terrell Allen stepped up to be the third scorer with 15 points for coach Ewing’s new look lineup. After everything that happened after the loss to UNC Greensboro, this was probably one of the best wins under Ewing considering the circumstances. Hell, even at full strength it would have been a great win in Stillwater.

So much as everyone figured, the straightest path to victory for Georgetown is now for both McClung and Yurtseven to pour in big nights offensively. The guard- center combo took a lot of shots and made a lot of shots. That’s Plan A. The Hoyas also got their third scorer in the form of Allen, although this will probably be something that changes from game to game with many possible contenders.

The next question will be, what happens if Plan A doesn’t work? Well with better ball movement and good rebounding, particularly on offense, the shots will be there for others. It’s not a coincidence that Georgetown had its best shooting performance from 3-point distance against the Cowboys. The ball moved.

While Myron Gardner and Galen Alexander didn’t get super involved in the offense, they did a great job helping Georgetown win the battle of the glass. This will be important going forward, especially for the frosh Gardner as he finds his way at the collegiate level.

I don’t think anyone from Georgetown wants Jamorko Pickett or Jagan Mosely to push things but the upper classmen duo are going to have to give Ewing more offensively as they fit into their new roles post transfers.

The Mustangs are undefeated but it’s not the most impressive 8-0 that anybody’s ever seen. Georgetown will easily be SMU’s best game of the season to date. Tim Jankovich’s squad’s best win is probably against a Top 140 UNLV team but they did also get by an Evansville group that somehow took down then No. 1 Kentucky. Everything else on the schedule is kind of similar to what Ewing’s first non-conference scheduled looked like which is not a compliment at all.

Isiaha Mike leads four Mustangs in double figures with 15.9 ppg and gave the Hoyas trouble last year by scoring a team best 17. The Duquesne transfer is shooting better than 50 percent from deep.

Another transfer – Kendric Davis from TCU – is averaging 15.8 ppg and 7.5 apg after missing the first four games. Tyson Jolly (14.4) and Feron (13.3) also put up double figures while Hunt grabs a team high 8.4 rpg. In keeping with the theme, Jolly is also a transfer (Baylor).

The Mustangs are one of the better rebounding teams in the country and defensively they have been pretty impressive against lesser competition. SMU has held four opponents under 60 and no one has put up more than 68. Despite their rebounding success, Georgetown’s Yurtseven will have a significant height advantage over pretty much everyone that tries to guard him from SMU.

6-foot-9 forward Ethan Chargois has missed the last two games for SMU which was picked to finish 8th in the American.

Of the nine players that played last year for Georgetown against SMU, only three remain (McClung, Mosely, Jahvon Blair). Pickett was suspended last year for this matchup for undisclosed reasons.

In the most unusual circumstances, Georgetown will have it’s first undefeated road trip under Ewing. Who saw that coming earlier in the week? No me, that’s for sure.

Looking Ahead: Georgetown returns home with a week off during exams before hosting long time rivals Syracuse on Dec. 14 at Capital One Arena. Ewing is still looking for his first win over Boeheim and the Orange as a coach after going 8-3 as a player.