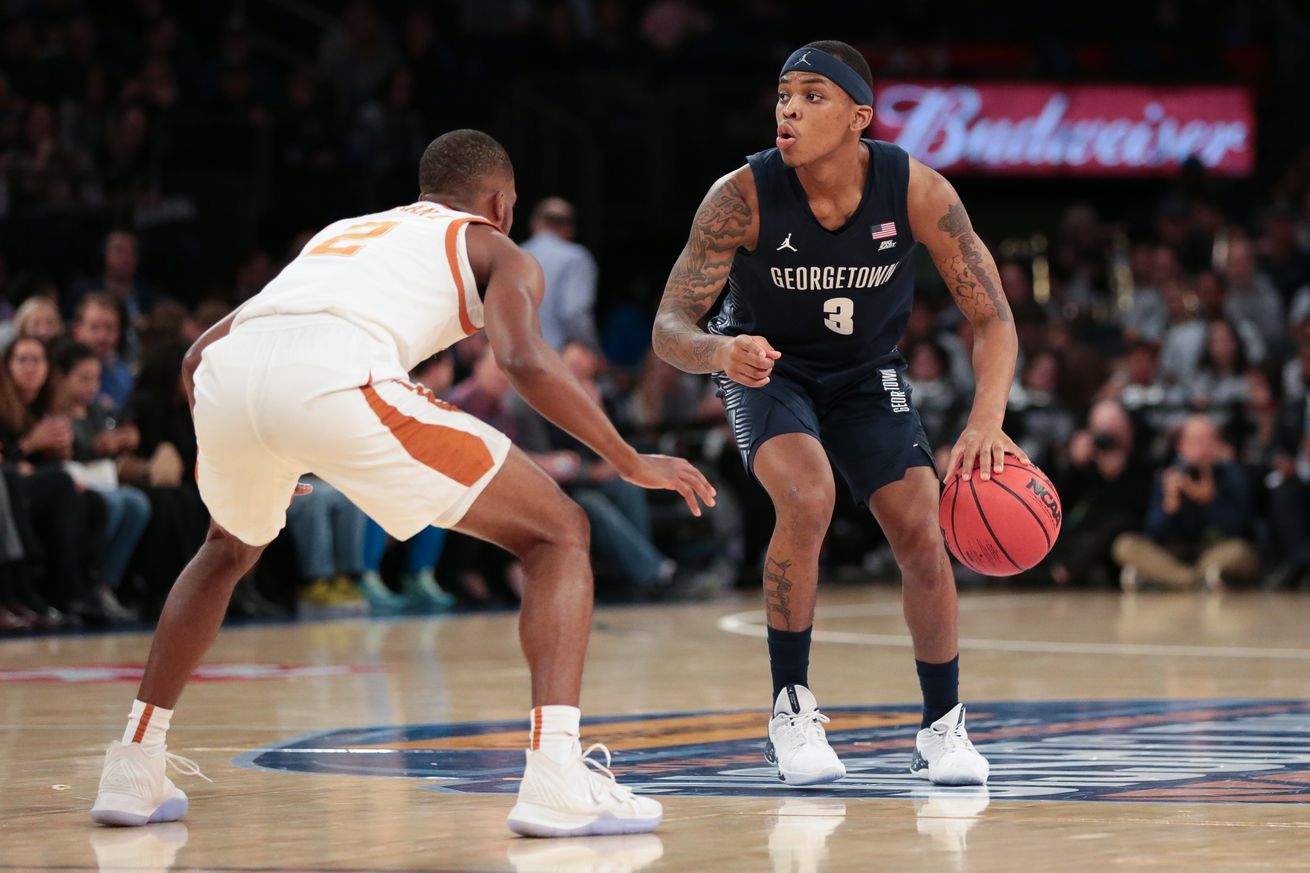 So many positive things happened in Georgetown’s second half romp over No. 22 Texas on Thursday night that I’m not sure there’s room for them all in this preview.

The biggest, of course, is that it setups a matchup with No. 1 Duke on Friday night in the Garden. If there’s one team that give Krzyzewski and the Blue Devils a run for their money in NYC for neutral fan support it’s definitely a Hoyas team led by Knicks legend Patrick Ewing who has his number up in the rafters.

This is the reason that the Texas game was always the biggest non-conference game on the Hoyas schedule. Obviously, a victory gives Georgetown a quality neutral win but it gives the Hoyas a shot at one of the top teams in the country. Win or lose, it will be valuable come March but this is a Georgetown team with the talent to pull off a statement victory now that they have the chance.

Let’s first go back and touch over some of the highlights of Ewing’s biggest non-conference win as a coach.

The Hoyas dominating performance over Shaka Smart’s ranked Longhorns – particularly in the second half – was probably Georgetown’s best complete half in Ewing’s short time as coach.

After giving up open 3-pointer after open 3-pointer in trailing 42-37 at the half, Georgetown showed a defensive effort that has been years in the making in holding Texas to just 22% in the second half.

Mac McClung led Georgetown with 19 points and was picked his spots from 3-point range (2 for 3). As a team the Hoyas only made five 3-pointers but they were all timely on a night here Omer Yurtseven was limited to just 12 minutes before fouling out.

James Akinjo struggled from the floor (2 for 10) but found a way to get to the line and made all 10 of his attempts in finishing with 14 points.

Georgetown’s biggest two stars of the night were Jamorko Pickett and Qudus Wahab.

Pickett was assertive and smooth playing in front of Kevin Durant in going for 15 points while getting up 10 shots. Last season he got up double-digit attempts only three times in 31 games.

Wahab came into Friday night with 11 points in his first four games as a Hoya and then filled in nicely with Yurtseven stuck on the bench by scoring a career-high nine in 21 minutes while adding two blocks. Wahab’s tip in before halftime gave the Hoyas some momentum that they would never relinquish.

As for Ewing – who was serenaded by the crowds with chants of “PAT-RICK EW-ING” – he did what he said he would do in shortening his bench from 11 players to nine while eight saw double-figure minutes.

On a Tuesday conference call Ewing said that it wouldn’t necessarily be the same players squeezed out from game to game but against Texas it was Jahvon Blair and Myron Gardner while Galen Alexander played just six minutes.

Friday night’s game with Duke will be a great test for how far the Hoyas have come since Ewing took control of the program as there’s no bigger stage that Madison Square Garden against the darling Blue Devils.

Well, certainly, Duke is Duke as former college basketball coach and current broadcaster Pete Gillen will tell you. It’s a much different team that the one that showed up to Capital One Arena in the regionals in March with Zion and company.

But don’t feel bad for Duke as Tre Jones came back and is joined by some of the best freshman in the country Vernon Carey Jr, Matthew Hurt, Cassius Stanley, and Wendell Moore Jr.

Carey Jr went for 31 points and 12 rebounds in Duke’s win over Cal on Thursday and leads Duke in scoring (18 pgg) and rebounding (9 rpg).

Seven different players hit at least one three against Cal.

Duke is one of the best offensive rebounding teams in the country and are right up there in steals as well.

Coming from N.C. State, Yurtseven is the only Hoya to have any experience – including Ewing – against Duke going 2-0. As a freshman, the 7-footer was scoreless in 12 minutes in a win at Cameron. The following year in a win at home, Yurtseven went 8 for 14, scoring 16 points and grabbing nine boards. Terrell Allen lost to Duke in the NCAA tournament last season with Central Florida. As a player Ewing never played against Duke and K.

Georgetown is just 3-19 all-time against the No. 1 team in the country. That does include a win against Duke in 2006 that basically put the Hoyas back on the college basketball map for years in John Thompson III’s second season.

Ewing will be the fourth different Hoyas coach to face Duke Coach K. This is the second time four different Georgetown coaches have faced the same school with the same coach (Syracuse).

Duke is now 217-34 under Krzyzewski as the top ranked team, matching the win total of the great John Wooden at UCLA.

This will be Georgetown’s fourth game against Duke (1-2) as No. 1, matching their most against an opponent (Connecticut, 0-4).

Georgetown’s only other time facing No. 1 at Madison Square Garden came in 1985 when the No. 2 Hoyas led by Ewing beat St. John’s.

Four years to the day Georgetown and Duke matched up in the exact same circumstances in the final of the 2K Classic. Isaac Copeland missed a 3-pointer at the buzzer that could have won it for the Hoyas that night. JT3 put out a lineup of DSR, LJ Peak, Copeland, Marcus Derrickson, and Bradley Hayes. Copeland finished with 21 points as Georgetown held a 47-42 lead at the break. Grayson Allen was too much that night leading all scorers with 31 points but I’ll always remember Kaleb Johnson hitting two 3-pointers including a heave before halftime.