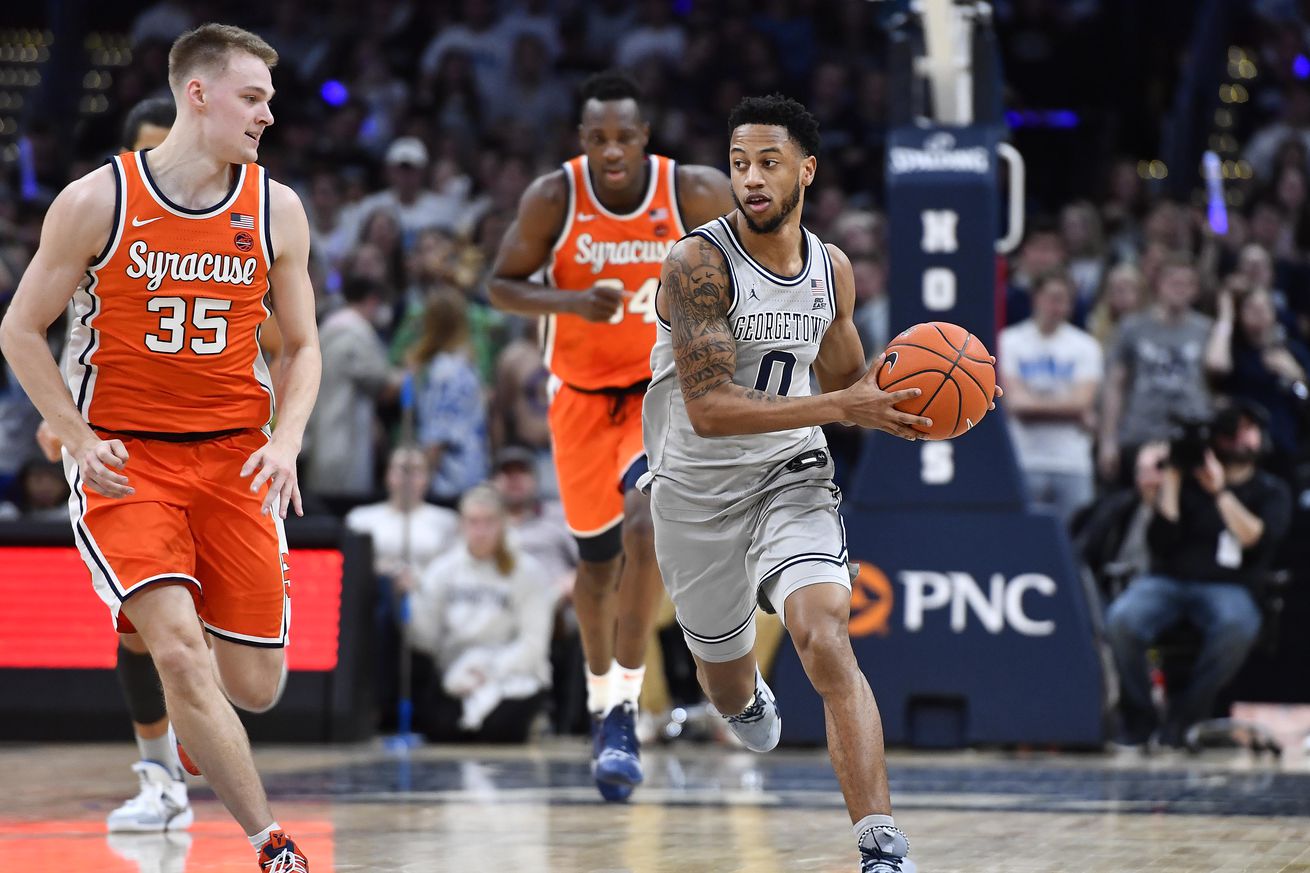 Where: Capital One Arena

Last Meeting: Georgetown won 66-47 in the first round of the 2008 NCAA Tournament in Raleigh

ATS: Hoyas are now 1-5 ATS after covering the number against Syracuse.

So far, through all the off the court issues, Patrick Ewing has been able to push all the right buttons. Now down to seven of the original 11 rotation players, the Hoyas have yet to show any signs of slowing down offensively and the defense has also picked up.

Led by Mac McClung – who is averaging 26 points over the last three games – Georgetown has put up a season best three game stretch with 81, 91, and 89 points and it’s come against quality opponents.

Terrell Allen and Jagan Mosely are giving the kind of senior leadership one would want and then even some extra as both have been playing nearly mistake free basketball.

The big test against UMBC will be to see if Georgetown continue their hot streak in a game with little to no fanfare. A 630 PM tip at Capital One Arena against a team from the America East will probably be played in front of 3,000 or so fans. So basically, the exact opposite of the environment that Georgetown had on Saturday against Syracuse. Under Ewing, Georgetown has been notorious for playing up for good teams and down for lesser ones. In order to a be a good team, that needs to change.

Omer Yurtseven recovered from a slow first half against the Orange to finish with 19 and 9 and even gave fans a glimpse of what it would be like if he didn’t wear a hair tie.

While the case can be made for almost every player in the Top 7 to be the most important guy, let’s talk about Jamorko Pickett for a second. Gerogetown has two centers, four guards, and only one true forward I that group and it’s the junior Pickett.

Pickett picked up three fouls in the first half against Syracuse but the Hoyas survived. They actually went on their big run after it happened but going forward it’s going to be really important for Pickett to play good defense while being smart about when to let things go.

After starting 4-3, entering the BIG EAST at 10-3 would be a pretty big accomplishment and it starts against UMBC.

BACK TO BACK MAC

McClung was named BIG EAST Player of the Week for the second straight time on Monday. Believe it or not he’s the first Hoya to earn a single player of the week honor since L.J. Peak in Jan. 16, 2017. Rodney Pryor also had one that season.

Going back to the 2014-15 season, which is the only information available on the league’s website, here are the other players to earn back-to-back awards:

D’Vauntes Smith-Rivera is the last Georgetown player to win multiple awards in a season with two in the 2014-15 season which is also the last time the Hoyas made the NCAA Tournament.

Two years removed from being the ultimate giant killer by taking down No. 1 seed Virginia in the 2018 NCAA Tournament, coach Ryan Odom’s team isn’t looking a very safe bet to win 20 games for a fourth consecutive season. The Retrievers just snapped their second three-game losing streak of the season with a win over Juan Dixon’s Coppin State on Sunday. While sitting at 6-6, only three of their wins have come against Non-Division 1 opponents.

Darnell Rogers leads three players in double-figures with 14 ppg. K.J Jackson (13.4 ppg) and L.J. Owens (10.3 ppg) are also hitting that mark for a UMBC team that struggles shooting the ball. UMBC shoots under 30 percent from deep and is one of the nation’s worst free throw shooting teams at 60 percent.