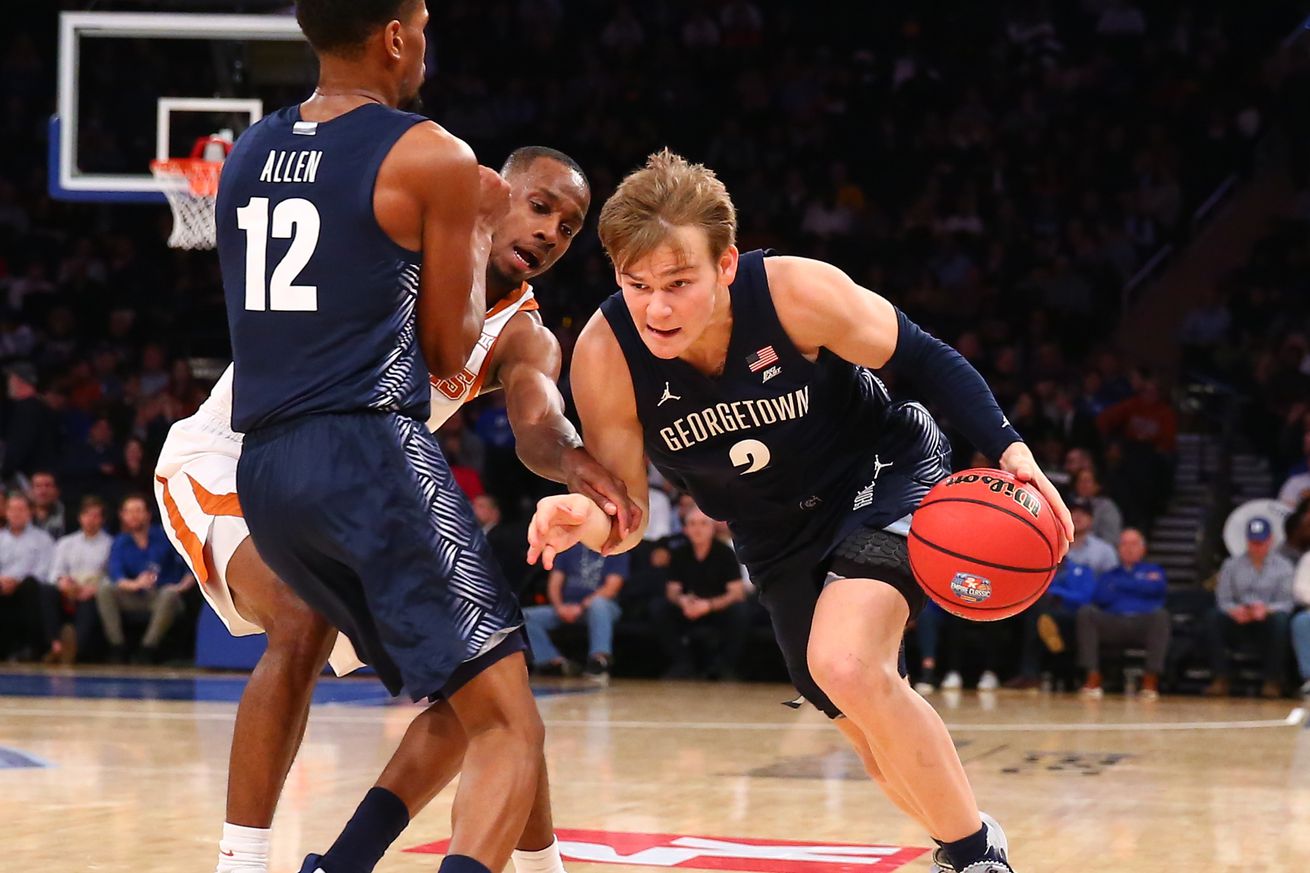 Defense + Discipline – Strange Lineups… this is what you asked for…

The Georgetown Hoyas beat the #22 Texas Longhorns at Madison Square Garden as part of the first day of the 2K Empire Classic and will face the Duke Blue Devils on Friday evening (around 7:30PM).

The story of the game was the second half and the Hoyas showing the defense and aggressiveness expected of them. In the post-game press conference, Texas coach Shaka Smart mentioned that without Matt Coleman’s 6 for 6 three pointers, Texas would have had an extremely poor shooting night (ultimately 23-61, with 11-29 from three). He’s right. The Longhorns appeared to lack confidence with about 12 minutes left in the game, having been stuck at 52 points for a few trips down. Georgetown was all-too-happy to let Texas settle for guarded threes.

When Patrick Ewing asks @TheGarden crowd to make some noise…they oblige. Georgetown dominates the Longhorns in the second half to win authoritatively over a ranked opponent in the 2K Classic, 82-66. #HoyaSaxa pic.twitter.com/5EyVZK0JZ7

Jamarko Pickett had his best offensive game in a long time, perhaps spurred by seeing Kevin Durant wearing burnt orange in the crowd. Qudus Wahab also had some big minutes while Omer Yurtseven was in foul trouble.

Matt Coleman III led all scorers with 22 points on 7-of-11 shooting for Texas (4-1), which shot just 22 percent (6 of 27) from the floor in the second half. The Longhorns were outscored 45-24 after halftime and finished without a field goal for the final 5:06 of the game.

Mac McClung scored 19 points to help give coach Patrick Ewing another signature moment at Madison Square Garden, leading Georgetown to an 82-66 victory over No. 22 Texas on Thursday night.

The Hoyas (4-1) used a 12-0 run early in the second half that rallied the crowd and had “Let’s go Hoyas!” chants echoing throughout the arena. With his retired No. 33 New York Knicks jersey hanging in the rafters, Ewing helped orchestrate another wild one at his favorite arena.

While Georgetown was on its offensive tear in the second half, Texas went dry, scoring on just 2 of 10 possessions en route to a 38 percent shooting night (a ghastly 22 percent after the break). Some of that was attributable to Texas going cold, as no one outside Longhorn star Matt Coleman (22 points, 6-6 from 3) could buy a bucket.

But Georgetown deserves credit, too: a Hoya squad that has mostly looked disoriented and unmotivated on the defensive end so far this season instead was nearly on a string against Texas.

The Georgetown men’s basketball team had their biggest win of the season on Thursday, taking down the No. 22 Texas Longhorns at Madison Square Garden 82-66.https://t.co/uKmy4SPand

Hoyas Pull Off Upset Against No.22 Longhorns | thehoya.com

Once the Blue and Gray gained the lead, the team would not look back, scoring 12 unanswered points to gain a 10-point lead while simultaneously holding Texas to zero field goals in over four minutes. To begin the second half, the Hoyas managed to hit 12 of their first 18 field goals and grab 11 of 14 rebounds. After finishing at the basket for two of his 14 points, Akinjo allowed for the Hoyas to maintain a 66-56 lead with just 7:30 left in the game.

Unsurprisingly, Texas was unable to make any sort of a late push, and thus, falls to 4-1 on the season as the nine-game winning streak comes to an end.

Just like old times, Georgetown makes Madison Square Garden its own – The Athletic | The Athletic

But even Ewing admitted this game felt different. The Hoyas played better collectively, his message that “I and me isn’t going to win games, we is” appearing to resonate. A porous defensive team ranked 96th in defensive efficiency, per KenPom.com, made critical second-half adjustments. Texas connected on eight 3-pointers in the first half, just three in the second. The Longhorns shot 50 percent early, 22 percent late. Mac McClung had his typical 19 points, but three other guys joined him in double figures. Freshman Qudus Wahab, pressed into service after Omer Yurtseven was saddled with foul trouble, answered with the best game of his young career: nine points, three rebounds and two blocks. “I felt like we took a step forward,’’ Ewing said.

We’re all still riding the wave of euphoria from the Hoyas’ defeat of #22 Texas by double digits.

How else to better relive those magical two hours than by reading our post-game recap? https://t.co/i2hmi0iAnY

Maybe this win wasn’t as big for Ewing as beating the Pacers or the Bulls in playoff games. For a few moments for the former New York Knicks great, the Garden was home again.

“It felt like back in my Knick days,” Ewing said.

.@GeorgetownHoops pulled away in the second to defeat No. 22 Texas at MSG on Thursday night. They’ll take on the winner of Duke/Cal (okay, pencil in Duke) on Friday night, at 7 p.m. ET. #Hoyas

In stifling Texas, Georgetown flashes a glimpse of its defensive potential – The Athletic | The Athletic

And then, seemingly from nowhere, came a second half defined by defense. As the Hoyas continued their standard up-tempo work on the offensive end, they also clamped down defensively, holding Texas without a field goal for nearly five minutes midway through the half and opening up a double-digit lead they never relinquished. Shots were more contested, penetration was harder to find. Most important, Georgetown defenders weren’t worked off the dribble in the same sorts of far-too-easy ways that have been the bane of Ewing’s existence for much of the past calendar year.

In the second half, the Longhorns made a grand total of six field goals, on 27 attempts. They were 3-of-11 from 3.

Ewing on the next opponent pic.twitter.com/zhSQ6ohpkP

As the Hall of Fame center walked off the court he owned for 15 Knicks seasons, he looked to the Hoya-dominated crowd and extended his massive arms, performing his trademark arm wave as if No. 33 were on his chest, rather than in the rafters.

McClung had 11 points in the first half. The sophomore guard finished 7-for-14 from the field and 3-for-5 from free throw line to go along with three rebounds, two steals and one assist.

It was McClung’s third career game at Madison Square Garden and he’s averaging 17.7 points, 3.4 rebounds, 2.3 assists at a place known as the world’s most famous arena. His next game at the basketball cathedral will come Friday night against the Duke Blue Devils, the top-ranked team in the nation.

Mourning spoke to Yahoo Sports before partnering with Guardian Life to benefit the Wounded Warrior Project during Thursday’s 2K Empire Classic at Madison Square Garden, where he and wheelchair basketball star Chris Saint-Remy will play H.O.R.S.E. to showcase that disability is not inability.

Alonzo Mourning was back at Madison Square Garden last night. This is a special story … and a happy one: https://t.co/8otCuzBQAb

Friday’s match-up will feature a couple of contrasting styles with Duke making its mark on the defensive end and Georgetown being one of, if not the more potent scoring teams the Blue Devils have faced this season…

Georgetown trailed Texas by a couple of possessions at the half, but were able to easily outpace the Longhorns in the second half. All told the Hoyas out-scored their opponent by 21 points after intermission to win comfortably.

Getting to the team’s first championship game of the season was accomplished with a familiar recipe. Duke overcame a sloppy and disjointed start to the game by locking in on defense and then finding the hot hand early and often. On Friday that was freshman center Vernon Carey who scored a game and career high 31 points to go along with 12 rebounds and four blocks.

Krzyzewski can set the record Friday night at MSG if the Blue Devils (5-0) knock off Georgetown in the final of the 2K Empire Classic. https://t.co/FNljziX4ZU

Though Carey kept the team afloat during its subpar offensive first half, scoring more than half of the team’s points with two blocks and seven rebounds, it was sophomore captain Tre Jones who helped spark and maintain Duke’s relentless scoring run. His pinpoint passes opened lanes for his teammates and allowed them time to get going. Jones finished with seven assists and eight points, and for a guy with a reputation of anything but a sharpshooter, his two made shots from beyond the arc were enough to keep California guards on high alert from the perimeter…

Duke continued to abuse the Golden Bears in the paint, out-rebounding California 50-28 overall, to extend its lead in the second half. California’s workhorse Matt Bradley scored just seven points, which made it nearly impossible for his squad to make it a competitive game.

“I’m not gonna shortchange our arena, Cameron [Indoor Stadium], but [Madison Square Garden] is the one I love to play in after Cameron,” Duke head coach Mike Krzyzewski said after the Kansas game about Madison Square Garden. “The balls bounce different, the noise. There’s just something about this place. I’ve now coached over 50 games in here, I’ve coached a hell of a lot more in Cameron. Eventually when I stop coaching, I’ll look back at the times here as very special times in New York.”

Georgetown played their best game of the season last night in their win over Texas. Can they make another statement by upsetting Duke tonight?

The offense for Jones has increased but the defense has remained at the same high level. And although he’ll need to score in double-digits against Georgetown, the point guard will be needed even more, dealing with some highly athletic guards in Mac McClung and James Akinjo. Both sophomores are double-digit scorers who can go off on any given night. McClung led the Hoyas with 19 points last night while Akinjo caused foul trouble, making all 10 free throws attempted.

Considering that Jones played in all 40 minutes against Georgia State just to secure the win, he’ll be on the court the entire time that the battle with the Hoyas will be close. But if Akinjo and McClung have their way, Jones will have to sit down due to foul trouble. And while backup point guard Jordan Goldwire is a solid defensive replacement, the offense for the Blue Devils will take a hit.

Ewing doesn’t turn to his bench often but the Hoyas got key contributions from Josh LeBlanc and Qudus Wahab on Thursday night as LeBlanc finished with nine points and four rebounds while Wahab also had nine points but three rebounds, in extended playing time due to Yurtseven’s foul trouble.

The Duke Blue Devils will have its handsful with the potent Georgetown roster on Friday night in the Championship Game of the 2K Empire Classic on Friday night at Madison Square Garden with tipoff set for approximately 7:30pm EST on ESPN2.

No. 1 Duke to play for first championship of 2019-20 against Georgetown | Ball Durham

Friday night between the Blue Devils and the Hoyas will come down to which defense is the best as both offenses were potent on Thursday night.

“Patrick won a lot of big games here, I hope he doesn’t win one tomorrow night.” – Coach K on Duke vs. Georgetown

“I want to beat him tomorrow but I’m happy that he’s here and he can build on that brand. It’s a great brand.” https://t.co/2r6MDzXUnf

Duke is currently the best team in the entire country so I have to take the Blue Devils in this game. Duke has already played multiple games at Madison Square Garden this season so it should be more accustomed to playing there than Georgetown [HA!]. Plus, Duke has more talent and a much better defense so it should be able to build up a huge lead as it continues to blowout any team in its path. Give me the Blue Devils.

Thoughts On Cal And A Look At Georgetown | Duke Basketball Report

Anyway, Georgetown had more trouble with Central Arkansas than Duke did and about the same amount with underrated Georgia State. But the Hoyas were tremendous against Texas and it looks from here like a a major battle of defenses Friday night. #1 Duke will obviously be favored but showing signs of growth shouldn’t be confused with being mature. This won’t be an easy game.