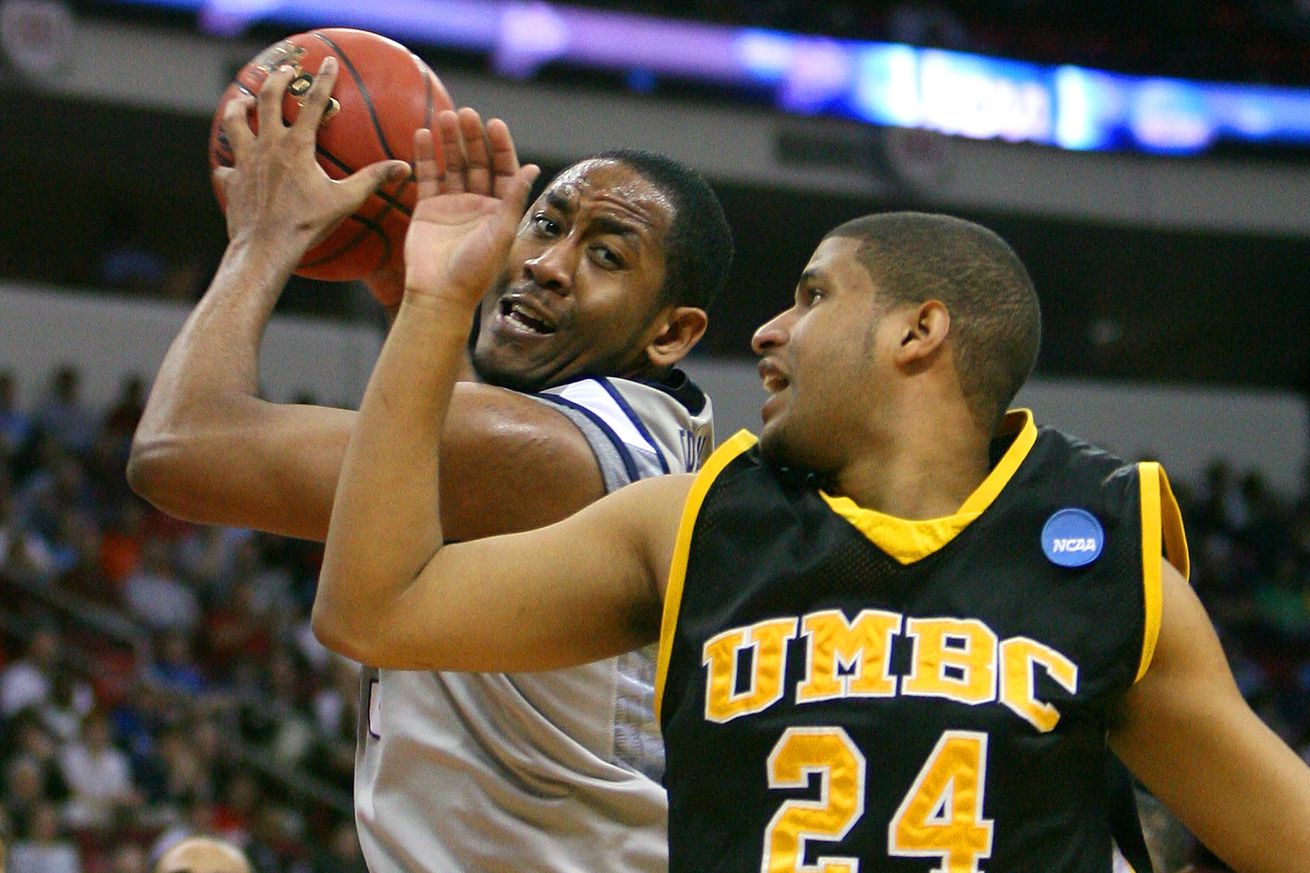 The Georgetown Hoyas will host the UMBC Retrievers on Tuesday night at 6:30 PM, as featured on FS1.

Your Fightin’ Hoyas of Georgetown received 3 votes in the AP Poll (from Sam Blum’s vote as #23), which places the Hoyas at a ranking of #42, after beating the Syracuse Orange on Saturday, 89-79.

BIG EAST Player of the Week Mac McClung, Georgetown, G, So. – McClung scored a game-high 26 points in an 89-79 victory against Syracuse. He also had four rebounds, two assists and did not commit a turnover in 36 minutes. McClung had 21 of his points in the first half when the Hoyas established a 48-36 lead. In his last three outings, McClung has averaged 26.0 points and has shot 46.2 percent from 3-point range.

On Monday @McclungMac was named @BIGEASTMBB Player of the Week for the second week in a row! Check him out in the @jiffylube Drive of the Game from Georgetown’s 89-79 win over Syracuse on Saturday! #HOYASAXA #HOYASZN #WEAREGEORGETOWN pic.twitter.com/NiUm1aMzL1

College Basketball Is Wide Open, and Could Stay That Way | NYTIMES (Jon Rothstein)

The buzz around the 6-foot-2 guard is different too. Every time the ball hits his hands the crowd draws their breath in anticipation of what’s about to occur. It’s as if a change in the air would cause one to miss his greatness.

There’s no missing what is in store for McClung in his Georgetown career. There are two and a half years remaining in his eligibility. Syracuse head coach Jim Boeheim gave him a glowing endorsement and believes he will flourish with a new point guard who’ll allow McClung to play the two spot in the line-up.

But for now, it is McClung saving Georgetown’s season. The Hoyas are at 7-3 and ranked No. 44 in KenPom as of this writing. No one saw this three-game run coming for the Hoyas. It doesn’t sound like it’s going to stop any time soon.

Following Syracuse’s loss to Georgetown, Boeheim suggested that the Hoyas are a better team without its former starting point guard, James Akinjo. “They got rid of a guy that wouldn’t pass the ball to anybody and just shot it every time and that’s why they’re good now,” Boeheim said post-game…

Boeheim went on to say that two of the players Patrick Ewing lost weren’t contributing much, but the remaining seven Georgetown players are good. “They’ve got seven guys that are as good as anybody’s,” Boeheim said. “Two guys weren’t really contributing at all and that other guy was throwing the ball up all the time. I know Patrick [Ewing] can’t say that but I can. I watched him play three games. He lost two games for them by himself.” [OUCH!]

After Georgetown beat Syracuse, 89-79, on Saturday, Jim Boeheim said the reason the Hoyas have won three in a row is because Georgetown “got rid of a guy that wouldn’t pass the ball to anybody and just shot it every time.” He was talking about former point guard James Akinjo, and while I don’t think it’s cool for a coach to call out a player from another program like that, it’s hard to argue Boeheim’s point. During Akinjo’s seven games with the team, he averaged a team-best 4.4 assists, but he also led the team in field-goal attempts (12.7) and shot 33.7 percent from the floor, including 24.2 percent from 3. That’s a bad look for a point guard and, not coincidentally, the Hoyas lost three of those games.

Monday’s Overreactions: Kansas is better than Gonzaga, Memphis is real, UNC is not – CollegeBasketballTalk | COLLEGEBASKETBALL.NBCSPORTS

THE EWING THEORY SHOULD BE RENAMED THE AKINJO THEORY Has there been anything more surprising than seeing a Georgetown resurgence come with the departure of James Akinjo, Josh LeBlanc, Myron Gardner and Galen Alexander? …

In the three games that have elapsed since then, the Hoyas are 3-0 on the season with wins at Oklahoma State, at SMU and over Syracuse at home. Mac McClung is averaging 26.3 points during that stretch and Jim Boeheim is telling everyone that the Hoyas are better now that they got rid of the kid that never passed. I think there’s a lot of truth to that statement. Akinjo was ball-dominant. From what I’ve been told by sources and people around that program is that Akinjo did not get along all that well with Patrick Ewing or with McClung, and that getting those four out of the locker room has improved the culture and the team environment.

The voice of the @GeorgetownHoops, Rich Chvotkin (@HoyasWin), was on the call for his 80th broadcast of Georgetown vs. Syracuse over the weekend. Which game stands out most? @TheAndyKatz asked him. pic.twitter.com/SwADsLf31g

UMBC enters the game with a 6-6 overall record after an 86-77 victory over Coppin State on Sunday that snapped a three-game losing streak. As a team, the Retrievers are averaging 72.3 ppg while allowing opponents 66.3 ppg. Darnell Rogers is averaging 14.0 ppg in seven games to lead UMBC, while K.J. Jackson (13.4 ppg) and L.J. Owens (10.3 ppg) are also in double figures. Rogers and Jackson each pace the offense with 4.3 apg and Brandon Horvath averages a team-high 5.7 rpg. ABOUT THE MATCHUP Tuesday will be the third meeting all-time between the two teams, with Georgetown having won both previous matchups.

The Hoyas and Retrievers last met in the 2008 NCAA Tournament First Round, with Georgetown coming away with a 66-47 victory in Raleigh, North Carolina. Roy Hibbert and Jonathan Wallace led the Hoyas with 13 points apiece, while Patrick Ewing Jr. came off the bench with 10 points.

Check out the highlights from our 86-77 victory over Coppin State! Your Dawgs led by as many as 24 points yesterday and six players scored in double-figures including Brandon Horvath who led the team with 16 off the bench. #RetrieverNation pic.twitter.com/feR0rhjKHF

Brandon Horvath scored 16 points to lead UMBC past Coppin State 86-77 on Sunday… Horvath was one of six Retrievers players score in double digits. K.J. Jackson scored 14 points with seven assists, and five rebounds. R.J. Eytle-Rock scored 12 with seven rebounds and six assists, Keondre Kennedy scored 11 and Daniel Akin and L.J. Owens each scored 10. UMBC distributed 21 assists on 29-made baskets. The win ends a two-game skid for UMBC (6-6) and marked just its second win in its last eight games after winning four straight to start the season.

It’s GAME DAY! The Dawgs head to D.C. to take on Georgetown at 6:30 pm @CapitalOneArena. Game can be seen on FS1. #RetrieverNation | #AEHoops pic.twitter.com/GTlIjKqu9B

In the Retrievers’ last game, they defeated the Coppin State Eagles, 86-77. The Retrievers had a turnover percentage of 13.0 (better than their season average of 17.7) and had an effective field goal percentage of 0.550 (above their season average of 0.516). UMBC received a boost from K.J. Jackson, who had 14 points, seven assists and five rebounds.

The Hoyas were victorious over the Syracuse Orange in their last game, 89-79. The Hoyas knocked down 24 of their 31 free throws (77.4 percent) and held the Orange to an offensive rebounding percentage of 15.6 (below their season average of 29.2). Mac McClung was the game’s leading scorer with 26 points on 7-for-16 shooting from the field.

After an amazing weekend for Georgetown athletics, the Hoyas are back in action tonight, taking on the UMBC Retrievers.

We’ve got your covered with the report on the Retrievers here in our pregame preview!https://t.co/obsr8h1aMJ

The Retrievers are led in scoring by junior point guard Darnell Rodgers who averages 14 points and adds a team high in assists with 4.3 per game. Rodgers measures at just 5 foot 2 inches tall and the length and athleticism of Mac McClung will look to contest his shots and force the ball away from him. Rodgers shoots an impressive 42.2% from the three points line and has been able to navigate his way through the paint, shooting 44.6% from the field this season.

I just want to tell the World that we, members of Georgetown University’s family have lost one of the most wonderful person and mentor in our family, Mary Fenlon. I did my works in college and graduated on time because of her. She will be missed. May God bless her soul. WeAreGeorgetown! Love Always! @georgetownuniversity @georgetownhoops @georgetownathletics @dofficialmutombo

Georgetown announced that Mary Fenlon has passed. Ms. Fenlon earned a lot of respect from Georgetown players, including some of the program’s biggest names like Ewing, Mutombo, Iverson, Williams, et al. Here is a write-up I did last month on some of her numerous accomplishments. https://t.co/OybUnLt8mF