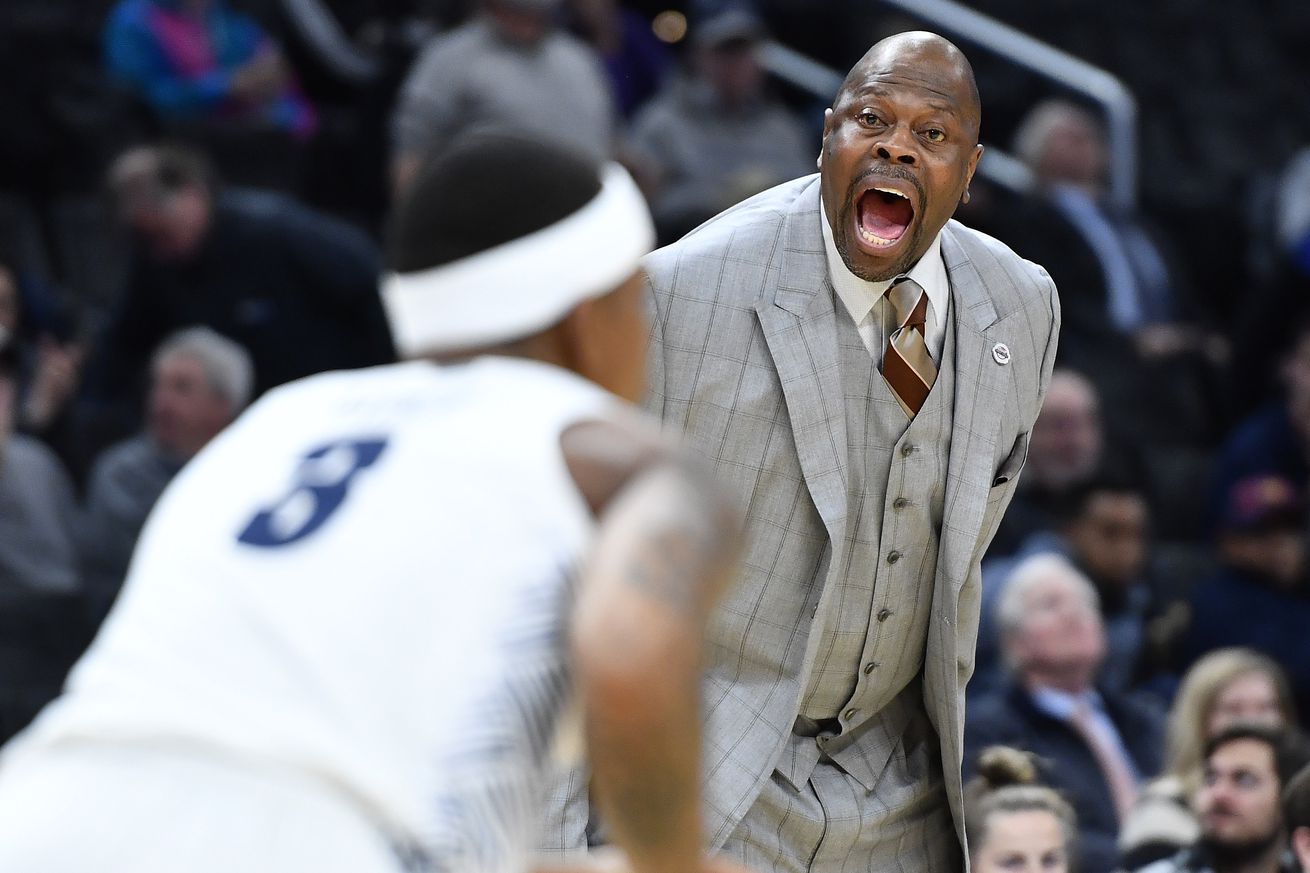 The Georgetown Hoyas lost to the Penn State Nittany Lions 81-66. The Hoyas’ horrendous start, marked by turnovers and poor defense, led to a game-defining 25-7 deficit in the first 5 minutes, followed by a sloppy track meet.

In my mind, there’s only one path to improvement and it’s 30+ minutes per game of Josh LeBlanc. LeBlanc undoubtedly covers up gaps in defense with his quick jumps and long arms. Offensively, he can do the dirty work by setting screens and getting on the boards, as well.

Ewing’s offense needs a do-everything-screener-rebounder. Yurtseven seems focused on posting up rather than pick-and-rolls, but the Hoyas really didn’t appear to run any offensive sets Thursday. Moving Pickett over to small forward gets back his height advantage and may limit his moving screens. LeBlanc’s promotion last year was a catalyst that brought the words “energy and effort” into nearly ever post-game press conference.

And Coach Ewing really has tried everything else. I guess we have to give Ewing credit forces of imagination in his innovative line-change approach to college basketball. In all the iterations of players that we discussed this summer, no one uttered a lineup with LeBlanc, Alexander, and Gardner together. That’s a very weird flavor of positionless basketball.

We don’t know what LeBlanc did to get in Ewing’s dog house these first 3 games, but it seems like the only way to fix Mac McClung and James Akinjo is with a dose of their classmate in the starting lineup. It can’t hurt.

Anyway, here are the links:

Penn State shot 13 for 29 on 3-pointers while Georgetown made just four in 13 attempts. The Nittany Lions turned 21 Georgetown turnovers in 20 points. Omer Yurtseven had 16 points and 10 rebounds to record his third straight double-double for Georgetown (2-1) after transferring from N.C. State. James Akinjo added 13 points for Georgetown, which never led in the second half.

“Hoyas defense lets them down in loss to Nittany Lions” https://t.co/QTylltu93l @avarwallace

Hoyas defense lets them down in loss to Nittany Lions | WASHINGTONPOST

Ewing, who did not permit players to speak to the media after the game, said he also can’t quite pinpoint why all of Georgetown’s defensive drilling in practice hasn’t yet translated in games.

“Well, sometimes I’m not seeing what I want to in practice, but it starts individually,” Ewing said. “You have to be able to stop your guy, at least make him work. And sometimes we’re not getting that done, or four guys may do it and one may not, or three may do it and two may not. So we have to do a much better job of one, guarding our man, and then if we get beat, the help has to be there. Right now we’re not getting that done.”

Column | Penn State men’s basketball was impressive because it thrived even when its best player didn’t https://t.co/dP1SIJws0M

Column | Penn State set the intensity level in its win over Georgetown | COLLEGIAN.PSU.EDU

In the team’s first road game of the season and in front of a raucous opposing crowd, Penn State was dominant. Even during spurts of scoring from Georgetown, often following the Nittany Lions’ struggles to break the press, Penn State managed to quell any true comeback attempts.

“They would make a big shot or big play, maybe steal the momentum just for a little bit, and then we were able to get a big shot or a big stop or a big rebound,” Pat Chambers said. “I thought that was critical. I thought our mindset was really good, especially early in the second half, when they went on a little bit of a run. We just [have a] next play mentality, next play mentality, so really proud of these guys.”

Jamari Wheeler and Mike Watkins set the tone early for the Nittany Lions and proved to be crucial components in the team’s road win over Georgetown. Wheeler was wreaking havoc all over the floor, whether it be in transition defense or in the half court. He finished with four steals in the game, three of which came in the first 20 minutes. The junior point guard has never been much of a threat on offense, but he really doesn’t have to be, especially with this year’s roster. Wheeler didn’t even shoot the ball once in the first half, yet he was still one of the most impactful players on the floor.

“Everybody wants to say what Jamari Wheeler can’t do, well let me tell you what he can do,” Pat Chambers said. “Did you see that kid, he impacted the game all over the place — defensively, rebounding, toughness, steals, dives, dropping dimes, I mean, that’s the little engine that could. But everyone wants to say he can’t do this, he can’t shoot, I don’t care, that kid is playing at a high, high level.”

NB: if only Georgetown had a former All-Freshman team player who did this…

Chambers: “We have so much respect for Georgetown. I coached at Villanova back in the day. To be able to go on the road and get a big win, now we know what it takes.”

In fact, Penn State finished the game with 22 points off 21 turnovers in what turned out to be an ugly night for the Hoya offense. Penn State’s press also stifled the Georgetown offense and forced the Hoyas to make costly errors that kept them from clawing back into the game in the second half.

And while the main priority of Chamber’s full-court and three-quarter court pressure is to take valuable seconds off the shot clock, the Nittany Lions ultimately stopped Georgetown from getting into the halfcourt, which threw off its offense for all 40 minutes…

“Something we always try to stress is having a low turnover rate,” Ewing said “21 is just way too much.”

Ewing is very happy with Jagan Mosely, doesn’t seem that if Josh were to come back into the starting lineup, it would be for Mosely. At least right now.

Georgetown got within five points early in the second half (42-37), but Penn State was never really rattled. After momentum went back and forth for a few minutes, the Lions regrouped and used a 6-0 run to boost the margin back to 56-43 on a pair of Stevens free throws with 13:58 showing. It would be a while before Penn State really dropped the hammer. But the Hoyas never got closer than 10 the rest of the way. It was another good sign in that PSU survived the charge and then re-established itself.

Jones scored 14 of the Nittany Lions’ first 16 points – highlighted by four 3-pointers – as Penn State jumped out early and never looked back. Penn State (3-0) eventually took a 25-7 lead after a 3-pointer by Myles Dread, who finished with 14 points. Lamar Stevens also scored 14 points and added nine rebounds. Jones was 5 for 8 from beyond the arc. “Coach kept telling me to keep shooting and stay aggressive,” Jones said as he scored 16 of his 21 points in the first half. Jones finished six of 13 from the field, connecting on five 3-pointers.

Any guess who was guarding him for much of Jones’ 16-point first-half outburst? You got it, Mac McClung. Speaking of McClung, that man needs to figure it out, and fast. After shooting one of 10 from the field against Central Arkansas, Mac followed it up with another clunker, once again just tallying one field goal, this time on seven attempts.

“He’s just gotta play better,” Ewing said in reference to McClung. No s**t, sherlock. And sure, let’s keep LeBlanc in the doghouse and not start him. Let’s not give Akinjo and Yurtseven starter-type minutes. Let’s keep trotting out Jahvon Blair for extended periods of time. These are all great ideas, Pat.

Penn State’s hot start and tenacious, timely defense and rebounding throughout, all contributed to an 81-66 win at Georgetown in the Gavitt Tipoff Games.https://t.co/qNDdYhCTer

Penn State 81, Georgetown 66: The First Test Was A Success | BLACKSHOEDIARIES

The contribution from so many players not named Lamar Stevens was amazing. Stevens had just one of Penn State’s first 26 points as the team built a double-digit lead. While he only scored 4 points in the first half, Stevens had 3 rebounds, 2 assists, a block and a steal. He was playing hard, just not scoring. By the end of the game his stat sheet was full: 14 points, 9 rebounds, 3 assists, 4 steals and a block.

But the takeaway from this game should be positive. Per KenPom rankings, it is the highest quality non-conference road win for Penn State under head coach Patrick Chambers since defeating St. John’s in New York in 2013-14.

It’s the kind of early-season statement a talented team with postseason expectations should make. Mike Watkins was relatively quiet but strong in 24 minutes, managing 7-footer Omer Yurtseven when on the court and contributing eight points and eight rebounds of his own. Yurtseven had a big game against Watkins and the Nittany Lions two years ago when he was still with NC State, and Watkins was able to return the favor on this night.

Izaiah Brockington had a strong first half and finished with eight points and seven rebounds, including three impressive offensive boards. Myles Dread contributed 14 points and six rebounds, hitting on 4 of his 11 three-point attempts. Wheeler led the team with five assists on the night.

Georgetown commit Terrance Williams has decided that he will wait until the late signing period to sign his NLI, he told @Stockrisers.

Not concerned about a recruit who does an interview like this (despite waiting until spring to sign a letter of intent) https://t.co/jqosZ2Zwii