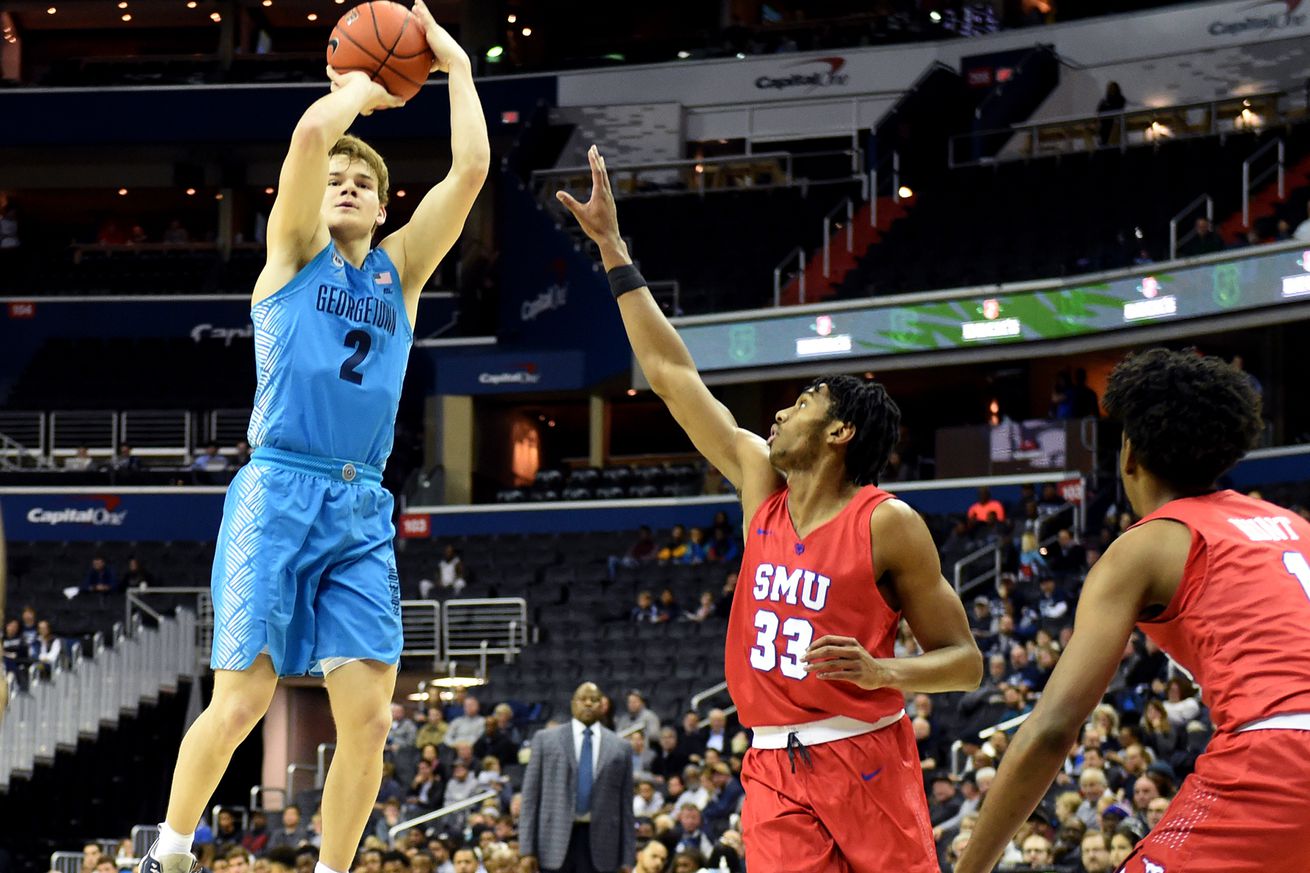 The 5-3 Georgetown Hoyas will face off against the 8-0 SMU Mustangs at Moody Coliseum in Dallas on Saturday night at 9:30 pm on ESPNU.

Georgetown and SMU first met in the 1984 NCAA Tournament Second Round, which the Hoyas won 37-36 on their way to winning the National Championship. SMU defeated Georgetown last year 81-73 at Capital One Arena. Jessie Govan led the Hoyas with 17 points while Mac McClung had 13 points.

Can the Hoyas complete a rather unlikely 2-0 road trip?

Georgetown is a 3.5 point underdog at SMU after a big win midweek at Oklahoma State https://t.co/OmrHurwTBQ

“It would be a big step. But at the same time, I feel like we’ve got to have the mentality that we don’t worry about what people are saying or what they think about us,” sophomore guard C.J. White said. SMU currently sits 84th in the KenPom rankings and Georgetown is No. 55. “We’ve just got to continue to do us, win and do everything else the same. Everything else will take care of itself.” The Mustangs are led by Isiaha Mike who is scoring 15.9 points per game, and Kendric Davis has averaged 15.8 points and 7.5 assists after missing the first four games. Tyson Jolly (14.4 ppg) and Feron Hunt (13.3 ppg) round out those in double figures while Hunt pulls down a team-high 8.4 rebounds per contest.

SMU has been a pleasant surprise this season at 8-0. Leading the way has been Isiaha Mike but Kendric Davis has been awesome over the past four games. Davis is posting 15.8 pts, 4.3 rebs, 7.5 asts, and 1.8 stls to jumpstart his sophomore year.

Ray was a dominating presence against Northwestern State, scoring a career-high 14 points on 5-of-6 shooting in SMU’s 77-51 win. He collected seven rebounds in 21 minutes. That followed up a 22-minute performance Friday. He’s been tasked with playing a lot more minutes of late with starter Ethan Chargois out for two-plus games with an injury. Chargois is fully expected to be back for SMU’s tilt with Georgetown on Saturday. But even so, Ray has shown he can be a strong option for the Mustangs to spell Chargois or even compete with him for minutes.

Highlights on the Hilltop ⤵️

In the second half, the Mustangs put down the hammer scoring 42 points and maintaining a dominating lead for the remainder of the game.

Leading the scoring for the team with 16 points was Isiaha Mike, who also had six rebounds, three steals, and a block. Ray recorded a career high of 14 points and tallied seven rebounds. He made his first 3-pointer of the season in the second half. Also scoring a career high in points, was sophomore CJ White. White contributed 11 points in the first half and 4 in the second for a total of 15 points. His field goal shooting was also perfect in the first half.

…The Mustangs have been led by Isiaha Mike, who is averaging 15.9 points and 6.9 rebounds.

MIGHTY MIKE: Mike has connected on 51.5 percent of the 33 3-pointers he’s attempted and has gone 9 for 19 over his last five games. He’s also converted 88.9 percent of his free throws this season.

STREAK SCORING: SMU has won its last six home games, scoring an average of 78 points while giving up 58.7.

ACCOUNTING FOR ASSISTS: The Mustangs have recently converted buckets via assists more often than the Hoyas. SMU has 54 assists on 86 field goals (62.8 percent) over its past three outings…

SMU basketball will be wearing white “Dallas” jerseys for its game against Georgetown on Saturday. The triple-D with the Mustangs logo will be featured on the back of the jersey and on the shorts.

It starts with Georgetown — a team that is going through some turmoil. Two of its players just left the team amid some serious accusations. Jankovich suggested Tuesday night that it’s possible for that team to get better despite the subtraction. On Thursday, he said that’s been the case. “They did. Without a doubt,” Jankovich said. “Yup, I watched them last night. They were a much better team — a much better team. I’ve seen it happen so often. … They are a very good team right now.”

Georgetown’s win over Oklahoma State could be the momentum they need to salvage this season. @MTCwithMook looks at how the Hoyas must move forward.https://t.co/9hZiJejEmt

Prior to his departure, Akinjo had led the Hoyas in shot attempts in two of the last three games. Both of those games were losses. That’s not to say he’s the reason. That’s to say that the ‘big three’ were still trying to figure out how to play with each other. Most of all, each player looked more comfortable on the floor. That could be because the Hoyas no longer have two ball-dominant players (Akinjo and McClung) on the perimeter. It could be because players like Jahvon Blair feel as if they’ll get more minutes without having to compete for them. Strangely enough, Georgetown could play more relaxed without as many contributing players.

Georgetown’s Patrick Ewing on the recruiting trail despite issues going on at school. I’m told he checked out Harrison Ingram and Colin Smith tonight.

Ingram is a five-star junior while Smith is a Top-35 sophomore.

Next up for #Knicks after interim coach Mike Miller is done … Patrick Ewing? COLUMN for https://t.co/lD7W1r0gv3: https://t.co/1qzf58XWLn