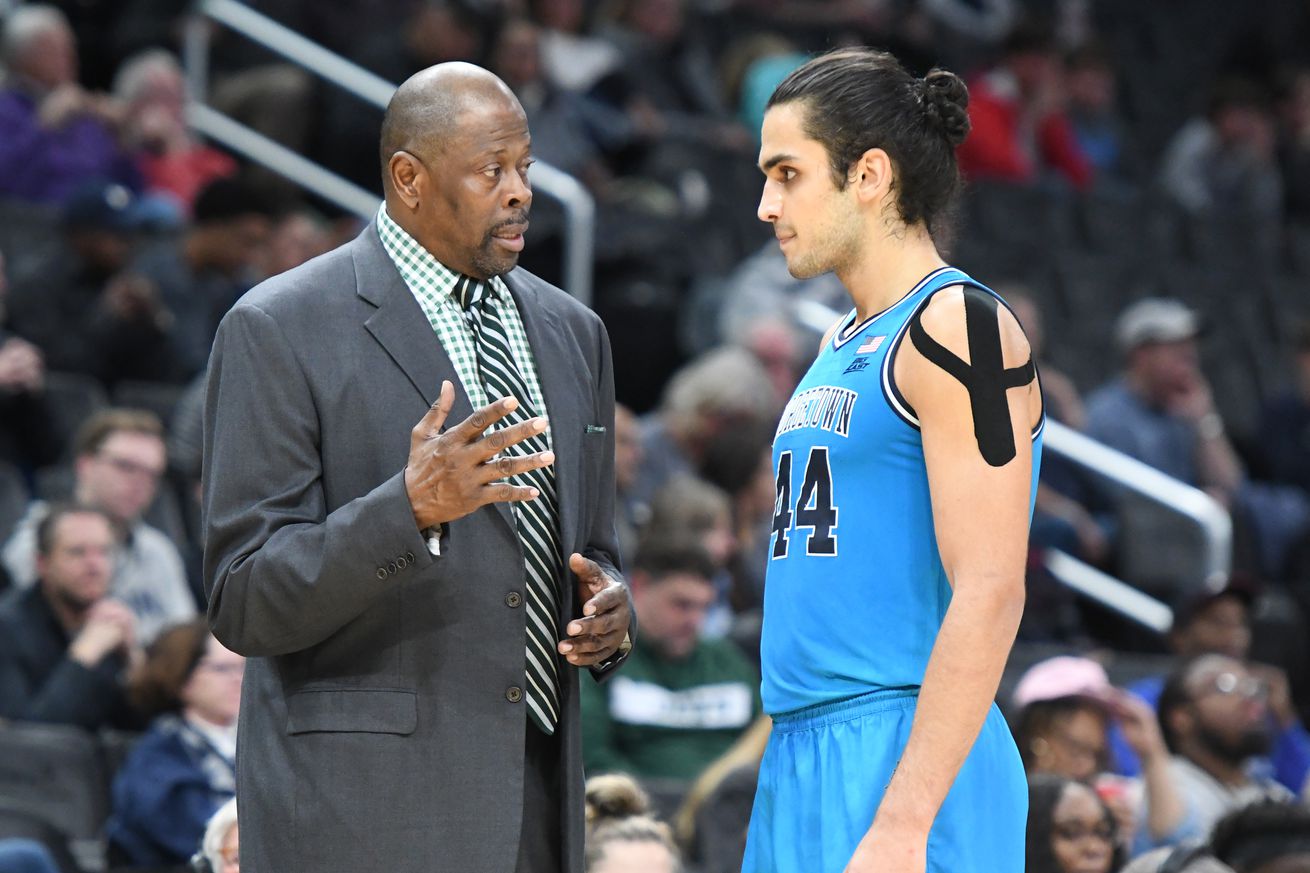 Can Georgetown handle the defense of #22 Texas?

The Georgetown Hoyas will face the #22 Texas Longhorns at Madison Square Garden as part of the first day of the 2K Empire Classic Championship Rounds at 7 pm on November 21, 2019 (ESPN2).

Here are the (updated) links:

If we’re being honest about things, the Hoyas haven’t looked particularly great in any of their games yet this season. Texas, on the other hand, has looked anywhere from solid to pretty good thus far, with a road win at Purdue as the shining gem of their season so far. This one will be at Madison Square Garden on Thursday night, which you would think would give the Hoyas at least a small advantage over the Longhorns. Is that enough to shake them up and push Patrick Ewing’s squad to a win?

[T]he matchup between Texas and Georgetown is more intriguing. Both teams are turnover prone as Texas ranks 252nd in turnover percentage, and Georgetown ranks 234th, according to Kenpom. This game could get sloppy if teams can’t take care of the ball, and both might not care as defense is the strength in this matchup. The Hoyas have a slight height advantage over the Longhorns as well. Texas has struggled beyond the arc this season, and if they can’t hit their three’s against a bad Georgetown perimeter defense, then they’ll have to go inside and hit shots over the seven-footer Yurtseven. This game should be fairly close, but Texas will most likely edge Georgetown.

Tomorrow night, the Hoyas will be in the Garden taking on Shaka Smart’s Texas Longhorns team as part of the 2K Empire Classic. Everything you need to know about the matchup with #22 Texas ⬇️⬇️⬇️https://t.co/iiNttBt7H4

The Longhorns have held their first four opponents to an average of 55.3 points on a combined 36.3 percent field-goal shooting, including a 28.8-percent mark from 3-point range. Texas’ defense has allowed only 25 assists while forcing 67 turnovers.

”We want our defense to be our anchor,” Texas coach Shaka Smart said after the Longhorns’ win over Prairie View. “The last two games, we scored 26 points in the first half, but our defense allowed us to have a lead going into halftime both times.

”Our guys are doing a really good job getting their hands on the basketball. We’ve had deflections in the high 30s the last two games. Our goal is 32.”

The 7-footer [Yurtseven] is averaging a double-double and will be one of the most talented frontcourt challenges UT will see all season. “Is our front court ready? It’s gong to be a heck of a test,” Smart said. Georgetown’s only loss this season came to Penn State in which the Hoyas were 4-for-13 from 3-point range. Playing at The Garden, it’s likely that Ewing and the Hoyas have the crowd in their favor.

On paper, a rotation built around NC State transfer Omer Yurtseven, Mac McClung and last season’s Big East freshman of the year, James Akinjo, has at-large potential… Simply put, the expectation is that this team will contend for a tournament bid, and, indeed, Yurtseven has looked dominant on the boards at both ends of the floor. Then again, the Hoyas were thrashed on their home court last week by Penn State 81-66 in the team’s first test of the season against a quality opponent.

Whether it’s Jericho Sims, Royce Hamm, or one of the freshman, they will be giving up size to the Hoya big-man down low. Sims, who has been prone to getting into foul trouble, must hold solid in this matchup. If Georgetown can force Sims to the bench early they will have a clear advantage…

The Hoyas are a high-powered offense and will inevitably go on a few runs. The key for the Longhorns is to avoid big scoring droughts and to play solid transition defense. In a game that should be very close throughout, easy buckets will haunt you.

This photo should not exist. These three should never be on the bench at the same time…
“Georgetown enters key stretch with emerging big man but guards still in development” https://t.co/W20s20z2GK

“If we’re going to be successful, they need to be more consistent,” Ewing said. “… They definitely put in a lot of work, and I’m waiting to see the hard work that they put in throughout the summer translate into better play. James had a huge game in the second half to get us out of that big hole that we were in [against Georgia State on Sunday]. He struggled [against Penn State], wasn’t very consistent, but Mac was struggling as well… We expect for those two guys to be one of the best backcourts not only in the Big East but in the country. And I’m expecting Omer to be one of the best bigs in the country.”

Please join the Hoya Hoop Club for our Thursday night Tip-Off Event starting at 5:00 p.m. at 5th & Mad located at 7 E 36th St. Duke and Cal will square off in the nightcap at approximately 9:00 p.m.