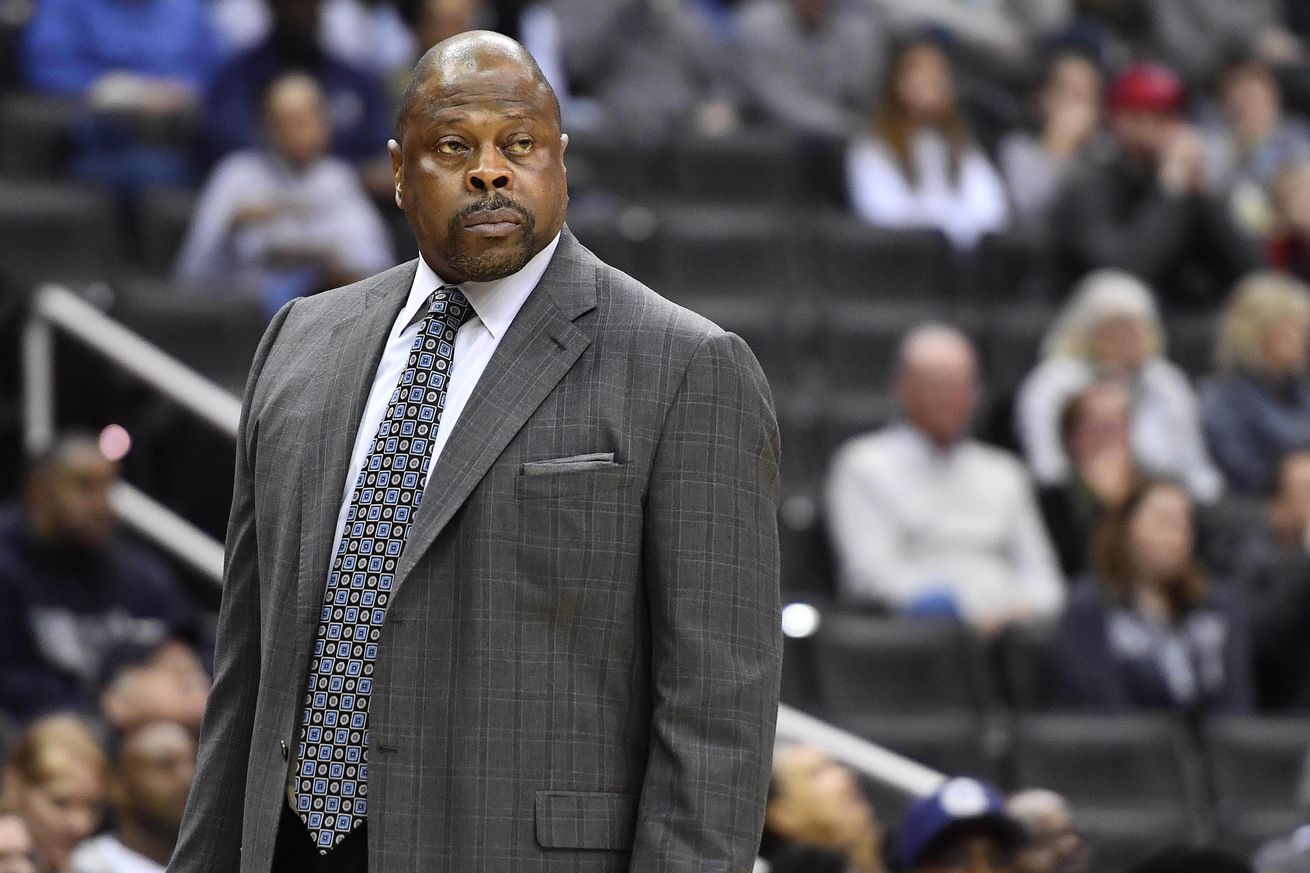 After a tumultuous two-week stretch rife with off-court drama, Georgetown seems to have righted the ship with four straight wins on the court. But as a college basketball coach, Patrick Ewing needs to balance the present with the future, and with four newly open scholarships, he will need to hit the recruiting trail hard in order to field a competitive roster for the 2020-21 season.

Of the Hoyas’ nine current scholarship players, Terrell Allen, Jagan Mosely, and Omer Yurtseven are expected to move on after this season. That leaves just six remaining scholarship players, and even with Dante Harris and Jamari Sibley committed to join the team in the fall, there are still five open scholarships as we move into the late recruiting period.

Building a roster takes months and even years of planning, and four sudden transfers can throw even the best-laid plans into flux. Let’s break down the task ahead of Ewing and his staff in the coming months.

Can Georgetown Add a New Player for the Spring Semester?

My first thought upon finding out that Georgetown was effectively down to a seven-man rotation for the rest of the season was whether Ewing could find a way to add a player to the roster for the remainder of this season. While it’s rare for college teams to add immediately eligible players to their rosters at midseason, it is theoretically possible, in a couple of ways.

It is possible for a high school prospect who qualifies academically could graduate early and enroll at Georgetown in January. UConn’s Akok Akok is an example of a player who did this last January, although he did not play until the following November. Syracuse freshman Quincy Guerrier, who you may remember from watching him score zero (0) points against Georgetown on Saturday, had planned to enroll at that dreaded institution in January before academic considerations prevented him from doing so. And in Georgetown’s own recent history, Stephen Domingo qualified academically and enrolled at Georgetown a full year early in 2012.

While this method is possible, it’s unlikely for a few reasons. First, players who enroll in January are usually not physically or tactically prepared to start playing in games immediately, and are usually better off saving the year of eligibility before playing beginning in the fall. Second, there aren’t that many players who are academically prepared to take this jump.

While we are all familiar with the conventional grad transfer process (hello, Terrell Allen), it is also theoretically possible for a player to enroll at Georgetown and play immediately, even at midseason, if he has already graduated from another institution.

D.J. Williams, a 6’7” wing originally from Chicago, fits this bill. He played two seasons for Illinois before transferring to George Washington, sitting out a year, and playing his redshirt junior season in 2018-19. He led the team with an average of 13.7 points per game, along with 4.7 rebounds and 1.2 assists per game.

He told Jon Rothstein that he would become a graduate transfer eligible in December, which, would you look at that, that’s now! Williams was a top-100 prospect in the Class of 2015, and was productive for GW last season. He fits the roster perfectly as a big wing who could play behind or alongside Jamorko Pickett, and replace some of the production lost from LeBlanc, Gardner, and Alexander. It would be an easy transition — it’s only a few blocks from Foggy Bottom to Georgetown.

Rade Kukobat, a 6’9” forward, averaged 7.6 points and 4.8 rebounds per game last season for Eastern Illinois, before leaving the program prior to this season. He is reportedly eligible as a grad transfer, and is another player who could fit the bill as a potential addition.

A Football Player (or Other Athlete)

A Casual sleuth in the comments section pointed out that Ewing could add a football player, or an athlete from another Georgetown team, to the roster for the remainder of the season. Chris Autino, a 6’7” tight end, played basketball alongside Florida’s Scottie Lewis and Villanova’s Bryan Antoine at the Ranney School in New Jersey. Autino, or another Hoya athlete, could be a useful addition, at least as a practice player.

While it’s fun to think about adding to the current roster, the methods I laid out above are rare and thus unlikely. What is clear is that Ewing needs to add several players to his 2020-21 roster.

Ewing has been creative in his recruiting methods, hitting the de-commitment (Mac McClung, James Akinjo, Jamorko Pickett), junior college (Galen Alexander), sit-out transfer (Omer Yurtseven, Greg Malinowski), and grad transfer (Trey Dickerson, Terrell Allen) markets in addition to traditional freshman recruiting. He’ll need every ounce of that creativity now, with five open scholarships and many high school prospects already signed to other schools. So how can Ewing build a roster for 2020-21? Let’s take a look at some of the potential methods, along with their pros and cons.

The four departed Georgetown players are not the only players who will transfer at mid-season this year. The main advantage of the mid-year transfer, over waiting until the end of the season, is that players can usually gain eligibility by December of the following year. These players can also apply for waivers to play at the beginning of the season, but the NCAA’s process for granting these waivers is unclear at best and nonsensical at worst.

I think this option makes a lot of sense for Georgetown’s current situation. These players have some college experience, can be eligible for at least part of next season, and can be available for more than just one season. I would expect Ewing to hit this market hard in the coming weeks. Although he hasn’t brought in this type of player yet, he was involved in the recruitment of Jordan Tucker, a mid-year transfer who ended up at Butler, so we know he’s willing to explore this path.

Jeff Borzello has a tracker that maintains a list of some of the top players in the transfer portal. While it hasn’t been updated in a few weeks, it is worth keeping an eye on that page moving forward to see who might be available.

Terrell Allen shows that the right graduate transfer can be a crucial piece for a winning team. Grad transfers have a lot of college experience, and can bring more refined skill sets than high school prospects.

It’s worth pointing out that they don’t all work out as well as Allen has. Sometimes, a mid-major player’s game doesn’t translate to a conference like the Big East, and sometimes the fit between player and team doesn’t work out as planned. And even if a player like Allen does work out, you only get to have him for one season.

Still, with a thin and inexperienced roster, I think it’s fair to expect Ewing to add at least one graduate transfer to next season. With Allen and Jagan Mosely graduating after this season, a veteran point guard is almost a necessity for next year’s roster.

Omer Yurtseven and Greg Malinowski are examples of successful sit-out transfers. Though they had to wait a full season to take the court, both players spent their transfer season working hard to improve their games and get to know the team and system.

While a sit-out transfer can’t fill any of the many holes on the 2020-21, I wouldn’t be surprised to see Ewing add a sit-out transfer to re-stock the cupboard for future seasons. There are certainly enough open scholarships to add one.

While I generally believe that traditional freshman recruits are the best way to build a roster, this unique situation makes that more difficult. First, it’s already very late in the Class of 2020 recruiting cycle, as just 14 of ESPN’s Top 100 remain uncommitted, including Terrance Williams (sobs).

Second, given the thin roster, the Hoyas will need to bring in players who can contribute immediately, and it is asking a lot for an under-the-radar freshman to come in and play big minutes right away.

That being said, it is certainly possible to find diamonds in the rough at this point in the recruiting cycle. I would expect Ewing to hit the de-commitment market hard again, and it would be worth tracking the junior college market as well. Still, the lateness of the hour means that Ewing will need creative recruiting in addition to traditional high school recruiting.

What Will Ewing Do?

This leaves two open scholarships for sit-out transfers or developmental freshmen, likely with a ten-man rotation that includes whichever of the developmental centers is most ready to play.

A graduate transfer point guard is a virtual necessity for next year’s roster. With Allen and Mosely departing, unproven freshman Dante Harris would be the only point guard remaining on the roster. I am hopeful that McClung and/or Blair might be able to pick up spot minutes at the point, but there needs to be a new player who can step into the Allen role, even if he can’t play the role quite as well as Allen can. Columbia’s Mike Smith and Dartmouth’s Brendan Barry are early names to keep an eye on, as the Ivy League does not allow fifth-year players.

Ewing’s recent affinity for three-guard lineups means that it would be helpful to add another guard to the mix next season. Allen and Mosely will leave 60+ minutes per game available for the taking, and while Blair’s minute share will go up, even a good graduate transfer probably can’t soak up the rest of those minutes. Thus, Ewing will ideally bring in another guard to compete with Harris for a role off the bench. To that end, Robert Kirby was courtside at Simeon High School’s latest game, taking a look at 2020 guard Tyler Beard.

The departure of Omer Yurtseven also leaves a massive hole in the middle of the Hoyas’ lineup. While Qudus Wahab looks ready to take on a larger role next year, with Timothy Ighoefe and Malcolm Wilson hopefully contributing behind him, there would still be a role for a veteran grad transfer who could play the 4 and the 5. With Jagan Mosely, George Muresan, and Wahab currently representing Ewing’s options for minutes at the 4 behind Jamorko Pickett, there is room for another big man in the 2020-21 rotation.

While losing four players at midseason is certainly not ideal, there is enough time left in the recruiting cycle to add three more players to the 2020-21 roster. We learned this season that an 11-man rotation is not the best idea, so leaving a scholarship or two open, or using them for a sit-out transfer or developmental freshman, might make sense. In the meantime, hopefully the Hoyas can maintain their recent momentum and attract a few solid pieces to bolster next season’s prospects.