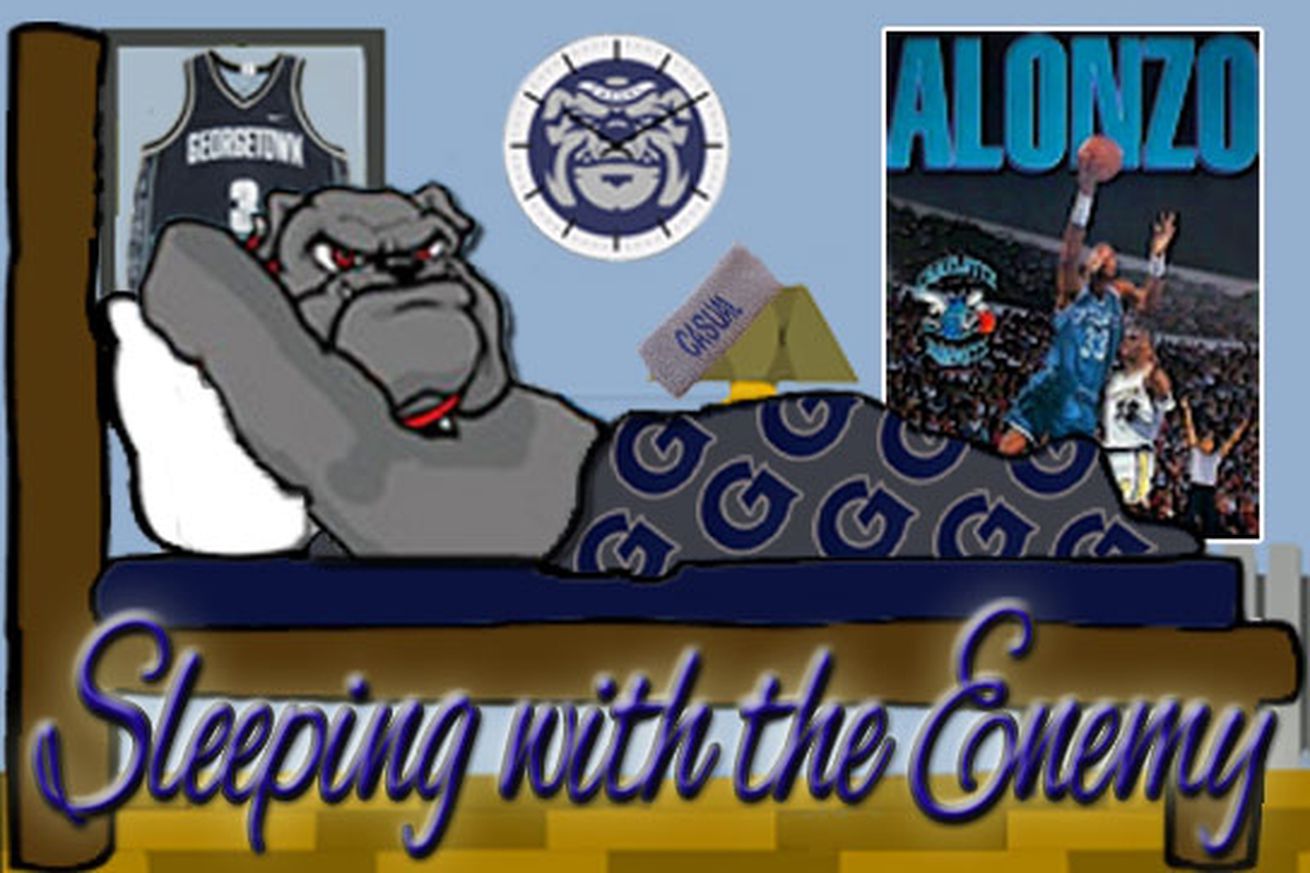 The greatest feature in internet history makes its triumphant return.

Your Fighting Hoyas of Georgetown get ready to face hated rival Syracuse on Saturday at Kente One Arena and with us as usual to dish on all things Orange are our best blog friends over at Troy Nunes is an Absolute Magician. Let’s do this!

Welcome back to the rivalry! Are you excited to get the blood boiling again or at this point has this become just another game on your schedule such as the ones against your new rivals Wake Forest?

I may just be speaking for myself here, but Syracuse vs. Georgetown is just as much about avoiding losing as it is about collecting a win, if that makes sense. The venom is still very much there for the Big East iterations of this matchup, and I wouldn’t trade those away. But there’s minimal benefit to beating the Hoyas right now aside from crowing in your general direction. Losing, on the other hand, usually becomes a bigger sports story of the day — regardless of SU’s record.

Who emerges as Elijah Hughes’ sidekick this season? Obviously he went off against Georgia Tech, but when he gets locked down or the rest of the team struggles to make shots, it appears Cuse struggles to win games.

You guys are going to love this, but it’s largely been Buddy Boeheim. He’ll deal with some cold streaks, admittedly. And I’d say his defense still needs to progress. But he’s the player most ready to knock down shots from outside if Hughes goes cold (or in the case of Saturday’s win over Georgia Tech, even when he doesn’t). This is far from a two-man, offense, yet Hughes and Boeheim are really the only guys I’d count on night to night. Is that terrifying? Yes, to some extent. Can it potentially work for a full season? No, I don’t think this offense can keep up with most ACC foes without Quincy Guerrier or Marek Dolezaj emerging as better scoring options.

What’s your take on the recent news surrounding the Georgetown basketball program?

The transfers? Laughed a lot. The decommitment? Also laughed a lot. The criminal allegations? Wondered what the timeline looked like for those names to be added to “Crimes and Misdemeanors.” Looking forward to you guys spending the entire first half of Saturday’s game tweeting about our past transgressions, as per usual.

Akinjo’s decision to transfer and Terrance Williams’s decommitment don’t necessarily have to be harbingers of doom (and in fact, the Hoyas’ recent play has proven that’s not the case). However, it’s not a great sign for the program that talented players actively don’t want to be there. Granted, I wouldn’t want to be at Georgetown either, so guess I can’t blame them.

Syracuse basketball took a trip to Italy this summer. Given that CasualHoya is really a lunch blog, we were horrified yet unsurprised to learn that many of your players prefer the pizza in upstate NY: https://www.youtube.com/watch?time_continue=152&v=wuYmWk8LOts&feature=emb_logo Is this youthful ignorance or does Nunes stand behind such heresy?

The fact that the kids from Slovakia and the Netherlands are the only one that seems to have the right answer, is a troubling development, for certain, and TNIAAM would never stand by such heresy. Jalen Carey’s from Harlem, so at least when he prefers the pizza from “home,” he’s using a reference point worth considering. Any pizza from north or west of Poughkeepsie should probably be avoided on principle. But I’m sure there are plenty of Syracuse fans that disagree with me on that front.

Your starters are playing a lot of minutes, sometimes the full 40. Do you anticipate Boeheim relying more on his bench as they gain more experience and move into conference play, or is he still a strict devotee of short rotations?

If ever he was going to move away from short rotations, this seemed like the year to do it, with a lot of unproven and young players and what was sure to be questionable consistency on offense. Instead, the bench has already shortened considerably, and you’re seeing guys like (actual NBA Draft prospect) Quincy Guerrier and Brycen Goodine get buried. Can’t say I’m a fan, especially this early in the season. And knowing Jim, he’ll stick to it, much to Syracuse fans’ collective chagrin.

Buddy Boeheim aside, which is the player on Syracuse that Georgetown fans are really going to hate on Saturday?

Feel like you may already dislike Dolezaj, and realistically, his top contribution to Saturday’s festivities could just be getting Omer Yurtseven to foul out. So let’s go with Joe Girard, the all-time leading scorer in New York high school basketball history. The freshman guard’s hit a little bit of a rough patch of late, but he can stroke it from three when he has room. If anyone’s going to piss you off to no end and give you flashbacks to ghosts of Gerry McNamara and/or Eric Devendorf’s past, it’s Girard.

True or False: You would prefer to have Mike Hopkins as your head coach right now. Explain your answer. In addition, where do you see Syracuse turning for its next head coach once if ever Boeheim decides to bounce?

Really, the preferred answer is a third option where Jim’s still the coach and Hopkins is still on staff as coach-in-waiting, while also continuing to land big name recruits for us (something he’s doing a great job of at Washington so far). That situation likely renders the question null and void, since Boeheim’s current situation looks a whole lot better as a result.

If we’re sticking to true/false, however, I’ll go with true. At this stage in his career, Boeheim’s not necessarily the same coach without Hopkins on the bench and recruiting the best players to Syracuse. And his lack of major adjustments over the last year and change have been frustrating to witness. Even without the same track record as Jim, Hopkins seems well situated to eventually have a pretty high ceiling as a coach. Would rather bank on that.

Hop’s almost certainly the first phone call when a future Syracuse coaching search begins, though there’s no guarantee he says yes, we’re aware. If not Hopkins, things get murky rather quickly. Would just hope SU opts to look for a head coach with some experience over a rising assistant name. That probably means looking at the Big East (though not Jay Wright, who’s not leaving Villanova) or Atlantic 10 for ideas.

Remember that time when Syracuse football fans were worried that the team’s success might lead head coach Dino Babers to consider moving on to a bigger job like FSU and then when the FSU job opened they didn’t even look at Babers because Syracuse football had yet another wildly disappointing season and Syracuse football has no hope and no future even in a muddled down conference like the ACC but congrats on grabbing the money and leaving the Big East even though all your fans secretly wish that never happened and that you’d still be in the Big East?

Had to do this to a Syracuse football fan, didn’t you? Our 10-3 season in 2018 certainly showed that this program can be competitive on an annual basis if we invest our resources in the sport, and the money we earn from ACC membership will only continue to help that cause. We could’ve attempted this in the Big East, but the conference brass decided that its best ideas to improve the football product were inviting Villanova to move up to FBS, and adding TCU because reasons. At least you have DePaul, though.

This pains me. Deeply. But without much of an inside presence this year, it seems like Syracuse is going to get eaten alive by Yurtseven. Should that occur, we’re basically relying on McClung going cold while the Orange stay hot from the field. That’s not something I feel great about. Expect a game that looks out of hand at points, then too close for your liking at others, only to wind up as maybe a 75-70 win in favor of the Hoyas. Cherish this when you get swept by DePaul and Creighton later on in the season.