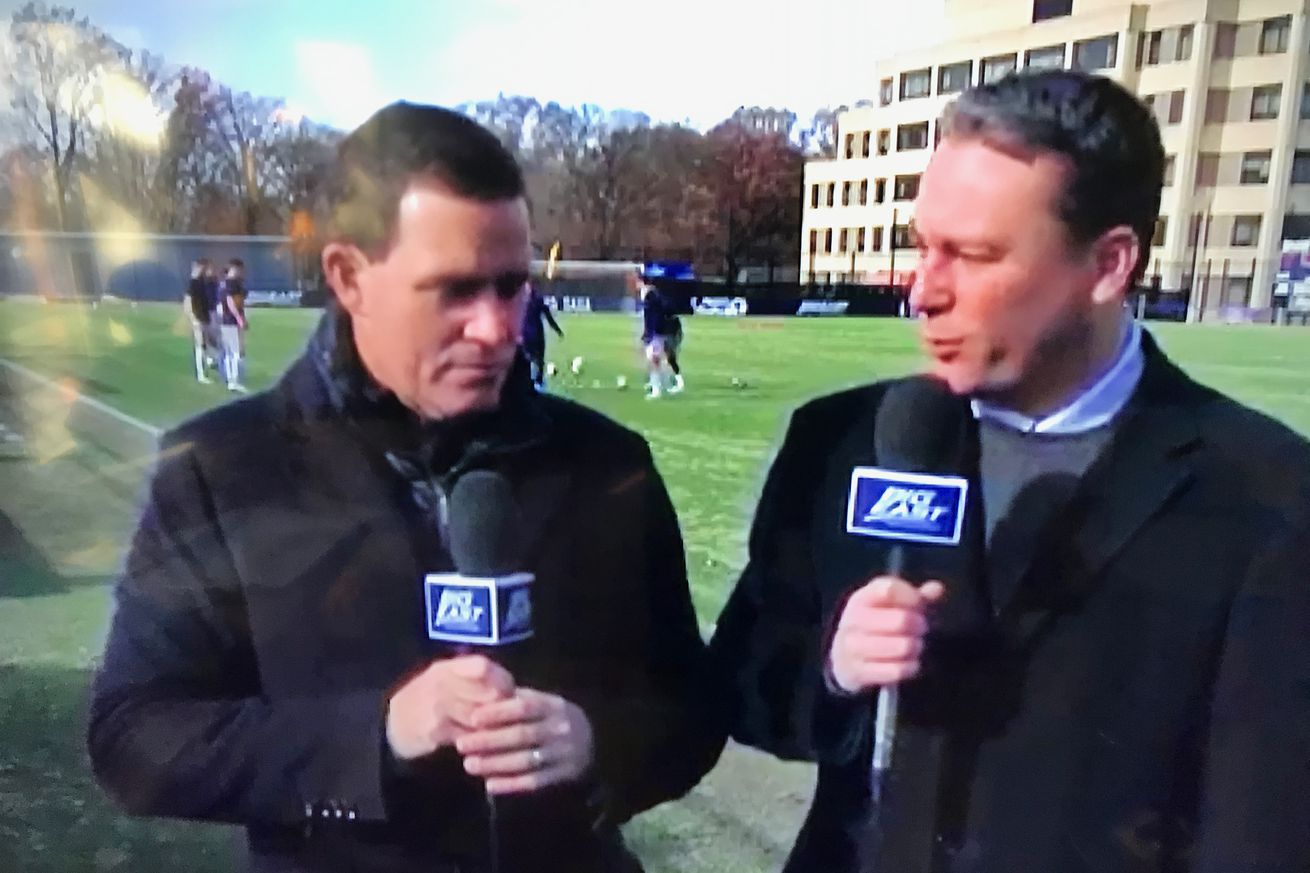 Georgetown alumni and former soccer players Dan Helfrich (play-by-play, SFS ‘98, MBA ‘99) and Tom Greaser (color commentator, MSB ‘98) have delivered the calls for every Hoya soccer home game this year- and for the 14 prior, and are back for a casual preview of the 6 PM Sunday battle. Their predictions were perfect in both semis. Wonder who they are picking in the final….

CH: Wow, quite a Friday night. More impressive: the Georgetown domination over Stanford, the UVA first half finishing clinic, or the fact the games could be played without an ark given 6 inches of rain?

TG: It is amazing that they could get both games played. But the Georgetown performance was more impressive to me…dominating.

DH: it’s more amazing to me that I enjoyed the game in the monsoon while you opted for the comfort of the couch. I suppose perhaps you were doing an assessment of the broadcast team “competition” on ESPN.

TG: I do melt in the rain. Oddly enough, I thought it was you on the broadcast many times…like when their crew “borrowed” your line talking about “one for the ages.”

CH: Tom, you called Zawadzki a Perry McDonald style enforcer. I don’t remember Perry doing the hoops equivalent of a 25 yard screaming volley that cracked the sportscenter top 10 or beating three players off dribble to set up the second?

TG: Ha! Yes, that goal (and performance) was more like Iverson dunking on UConn. But, don’t forget when Perry did this https://www.youtube.com/watch?v=nx1jNcMBX68

CH: how unusual is Coach Wiese’s trust of so many players on his bench?

TG – The strength of this team is their depth. They have so many interchangeable parts and Brian seems to always get it right with the combinations. He played 19 on Friday.

DH: the bench was en fuego last night, as part of a great night by several players not mentioned in our earlier preview. This includes Jack “best name for a college student” Beer, JB Fischer (the senior midfielder who grew into his career after youth academy days with Neymar and PSG), dangerous freshman dribbler Will Sands, and of Course Riley Strassner who leads the country (unofficially) in both fouls committed per minute played and terribly unlucky near goals (including one called off for offside last night). But the winner of Bench impact player of the night was local Bethesda junior Foster McCune who scored goal 2. Foster can be identified from afar by pink tape on wrist and shorts that he must have borrowed from Jamorko Pickett.

TG: Foster clearly gets the best celebration award with that 20 yard head first slide directly into the boards surrounding the field. By the way, Wiese’s high-octane gum chewing skills were on major display Friday night. can’t wAit to see what the pressure of a national final brings.

CH: watching highlights of UVA, sure seems like their striker Daryl Dike could be a handful for our back line?

TG: uh, yeah…he is a man. Seems to be a weird combination of Altidore and Gooch…

DH: I would actually borrow my 14 year old son Matty’s comparison. The Zion Williamson of college soccer. Shocking to see that much size, burst, athleticism, and skill from one young man. Plus may also be a #1 draft pick…

TG: I think Zion would appreciate the comparison.

CH: in terms of tradition, not much comparison between the 2 programs. 7 national title stars on the Cavalier jersey and none for the blue and grey. Plus, Cavs have eliminated us from Big Dance on several occasions. Is that really a factor?

TG: UVA has an amazing history…they have produced some of the best college players of all time, but Reyna, Harkes, Olsen and Lyle Yorks will not be playing Sunday night. So, all of that history is irrelevant. Ultimately, it seems appropriate that we would need to knock them off for our 1st national championship.

DH: A bunch of Hoya “greats” played their last career match in the NCAA tournament at hands of UVA. Dillard, Gomez, Martz, Rudy….oh yeah and this Greaser guy who scored a lot of goals in his day.

But fast forward to 2019. This game is a gift to soccer fans around the country. The two consensus best teams- combining for 2 losses and 40 wins- meet to decide things on the pitch. UVA fans believe their defense, anchored by goalkeeper Colin Shutler, is impenetrable. But these Hoyas have tallied a remarkable 14 times in this tournament, including getting 5 past Louisville goalie Jake Gelnovatch, son of UVA head coach George.

TG: I imagine George didn’t enjoy that broadcast of ours all that much…

CH: Dan is known for asking on broadcasts of close games “who will be the hero”…what’s the answer Sunday night? Your Predictions please.

TG – It will require a team effort to beat UVA and I anticipate many players rising to the occasion. That said, our 3 All-Americans (Nealis, Dodson & Montes) will all have heroic performances. I see Gtown winning 2-1.

DH: I see a dramatic Hoya goal in the last 20 minutes. And i see it coming from the quality of right back Dylan Nealis, either scoring or assisting. I also see a couple huge saves from Romero who likely gets the call in the alternating goalie rotation.

Btw, two of the three finalists for the Hermann trophy (soccer’s Heisman) are competing in the final. Nealis and UVA midfielder Joe Bell from New Zealand. i wonder if Dylan might do the Desmond Howard Heisman pose if my prediction unfolds.

CH: if the Hoyas lift the trophy Sunday night, what memories and what people will you be reflecting on?

TG – Clearly the hundreds of soccer alumni, especially all of the teammates and coaches that we played with. It is the 25th anniversary of the ‘94 team which put Georgetown soccer on the national scene for the first time. The memories of being in the team room in ‘94 & ‘97 and watching the selection show are two of the most special moments you can experience as a group. The pure joy that we experienced when Georgetown was announced, is something I will never forget. I will also never forget the moment in our locker room after UVA eliminated us in 1997 and ended our careers.

DH: I will be thinking about all of those things, including the late Frank Rienzo who invested so much in the program as

Our AD. But most of all the unsung heroes in the department who have made supporting Georgetown soccer their life’s work. To me, Luis Mendez who leads the upkeep of Shaw Field and has been part of the Athletic Department for 25 plus years personifies this Most.