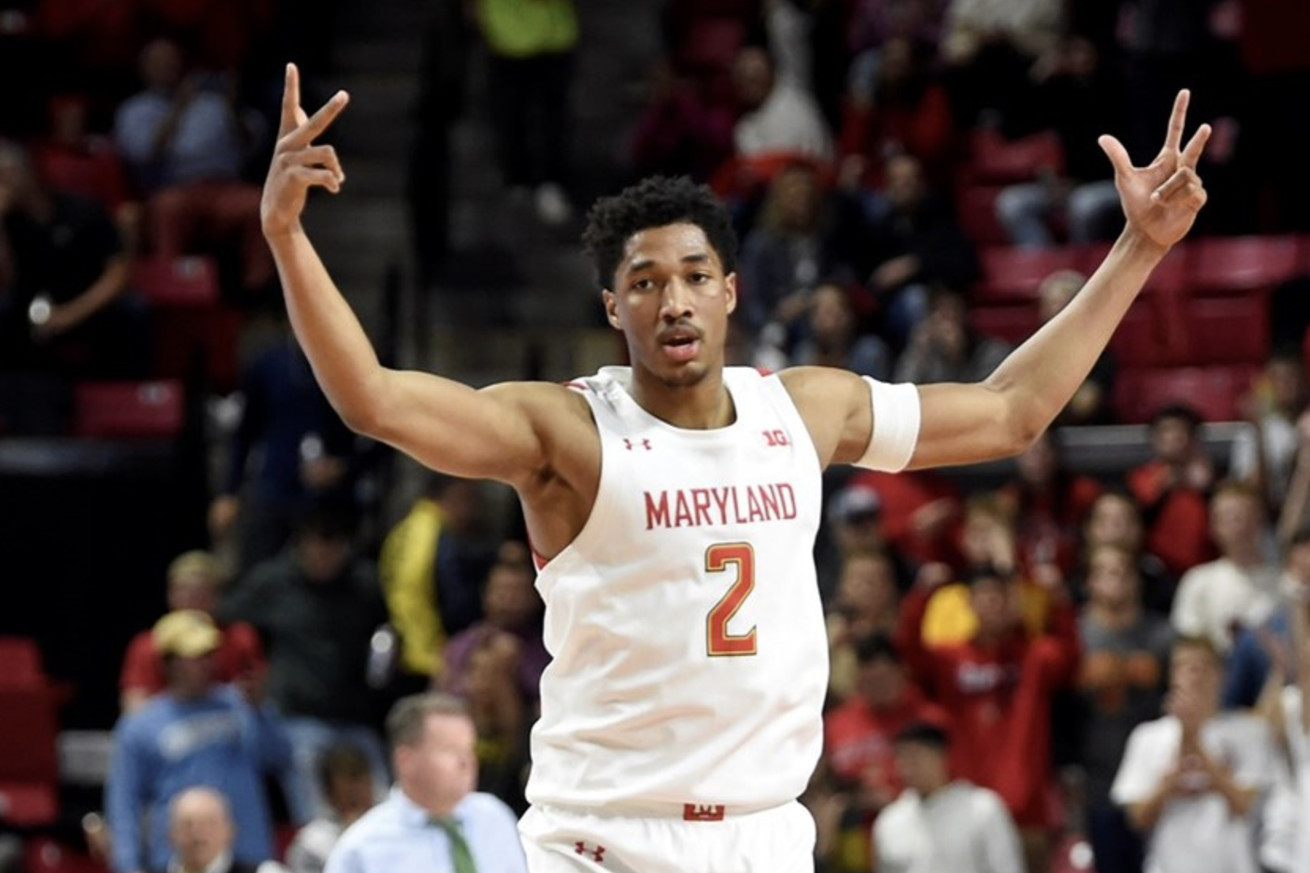 We take to the film room to examine key plays that led to the Terps’ 86-63 win over the Patriots.

Welcome back to the film room.

No. 6 Maryland men’s basketball took down a previously undefeated George Mason squad fairly easily Saturday, winning 86-63. The Terps got off to yet another slow start, but they were able to recover thanks to strong play from Anthony Cowan Jr. and Aaron Wiggins, among others.

Maryland trailed by as many as seven points early in the game, but closed out the first half strong, propelling them to the easy 23 point win. The Terps got to the line an impressive 38 times and converted on 30 of those attempts, which is a solid percentage from the charity stripe. Cowan had arguably his best game of the young season, and his ability to get the line was a big reason why.

Here are some of the standout plays from the game.

Anthony Cowan got to the rim with ease

On this play, Cowan uses a high screen and roll from Jalen Smith to create the separation he needs to get past his defender and convert the and-one layup. Cowan has been finishing around the rim quite nicely throughout the season, which has helped him keep his point totals relatively high, even in poor shooting performances.

The senior leader was aggressive throughout this game and a big reason why the Terps were able to go on a run to break the game open at the end of the first half. As evident by his high number of free throw attempts, Cowan put an emphasis from the start of this game to drive to the hoop and get to the line.

This drive here was maybe Cowan’s most impressive play of the game. The point guard simply uses a crossover dribble to confuse his man and then turns on the jets to motor past him. Cowan is met at the rim by the George Mason defense, but is able to easily finish the layup and head to the free throw line for one more.

Cowan proved often in this game that he can get to the basket whenever he wants and is one of the most elite finishers in the Big Ten and the entire country. He finished the game with a team high 16 points.

Wiggins had a really nice game against George Mason, scoring 15 points, after struggling a bit offensively to start the season. He was a team best 3-for-7 from behind the arc, which really helped the Terps on an otherwise extremely poor showing from the three-point line.

This was a great play designed by coach Mark Turgeon to allow Maryland to close the half out strong. Wiggins swings around and utilizes a high off ball screen from Donta Scott. The sophomore guard has enough space to line up his shot perfectly and connect on the three-pointer to send the Terps into the locker room with a comfortable 12-point lead.

Wiggins’ strong defensive play throughout the season has been a huge plus for the Terps. His length and athleticism allows him to create a ton of steals and he is often able to convert on the other end like he did on this play.

Maryland has been really solid all season long when it comes to its full court pressure and Wiggins proves that here. The North Carolina native was set up at the top of the press and easily spots where the pass is going and picks it off for an easy slam to give the Terps a 20-point lead.

Eric Ayala had a pretty quiet day, but this play here was the opposite of quiet. Ayala utilizes a nice high ball screen from Smith to drive to the basket and dunk all over the George Mason defender and draw the foul.

Ayala was assessed a technical foul after the play for apparently having something to say to the George Mason defender. He finished the game with just eight points and didn’t convert any of his four three point attempts.

On this play, Smith shows off a skill we don’t often see from him and that is driving to the basket from the perimeter. Smith uses an inside-out dribble move and powers his defender to the hoop to convert and draw the foul, one of the Terps many and-one opportunities from the game.

Smith finished the night with 12 points and 10 rebound — his third double-double of the season. He also got to the free throw line seven times and converted on six of those attempts to get his free throw percentage up to 74.1 percent on the season. It was Smith’s first game in 2019-20 where he did not record a block.

This was a great find by Hakim Hart and a much needed bucket for the Terps as they began to build a big lead in the second half. The freshman comes off a back screen and is able to dish it out to Ricky Lindo Jr. for an easy dunk.

The screen pulls Lindo’s man off of him to help on the coverage of Hart, leaving him wide open to cut to the basket for the easy two points. Hart and Lindo have both been playing pretty well recently, although it has often times been in limited minutes.

Makhi Mitchell easily had his best game of the season, and did so in limited time. The freshman big finished with 12 points and eight rebounds in just 10 minutes of action.

He was able to get to the free throw line often, making 8-of-12 attempts from the charity stripe, but this play was maybe the best of the game for Mitchell. He gets the ball in the post, uses a few dribbles and then converts a high arcing hook shot.

Depth has been considered a major plus for this Terps team, but if guys like Mitchell can play like this on a somewhat regular basis, this team could be special.

Ricky Lindo Jr. followed up his career day with just five points and four rebounds. On this play though, he plays great defense that leads to a George Mason turnover. Lindo had to switch onto a guard after the screen and does a great job of moving his feet and staying in front of him to cause the turnover.