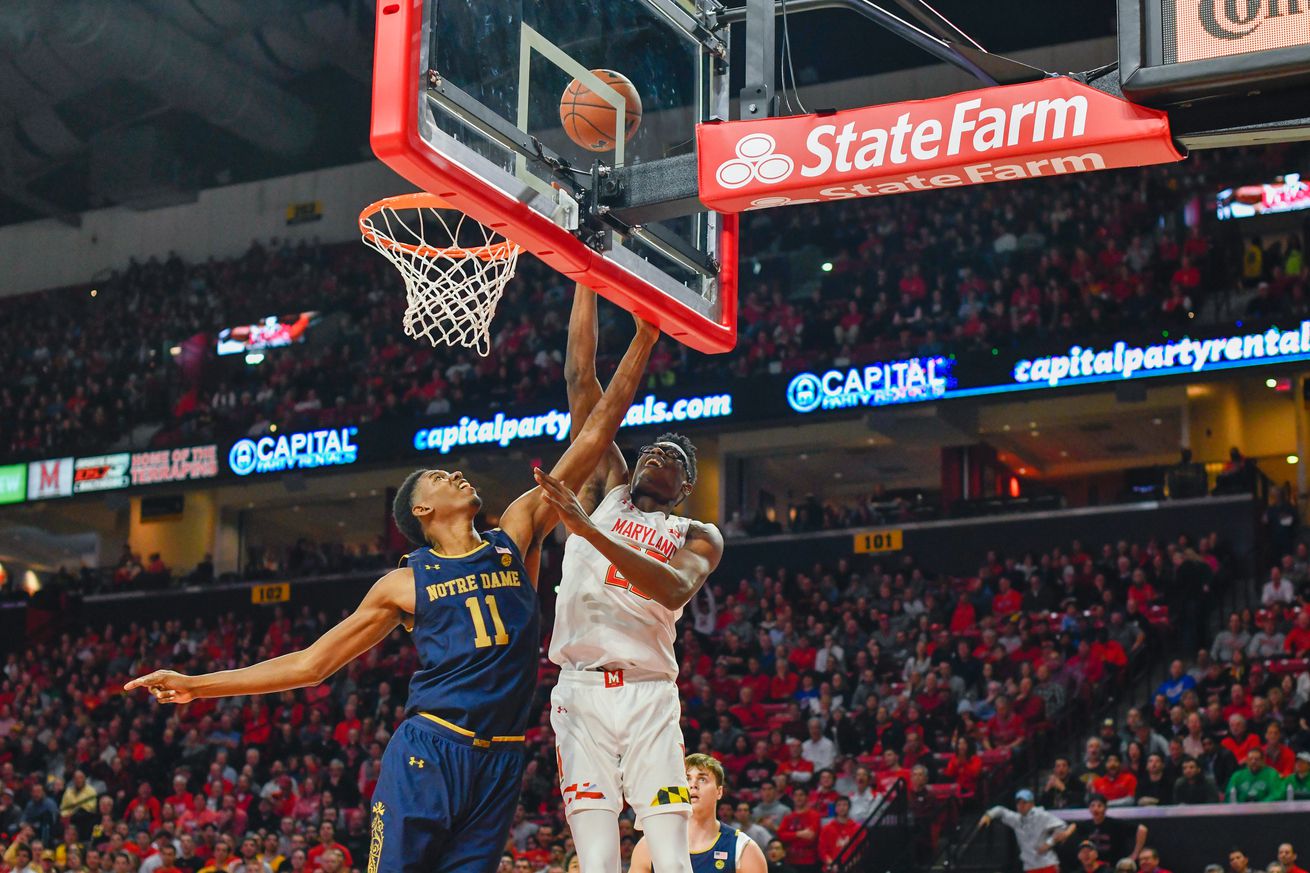 We take to the film room to examine key plays that led to Maryland men’s basketball’s domination of Notre Dame.

Welcome back to the Testudo Times film room. No. 3 Maryland men’s basketball took home its first ever win on the Big Ten side of the Big Ten/ACC Challenge with a 72-51 rout of Notre Dame Wednesday night, improving to 9-0 on the season.

After shooting the ball poorly to start the game, the Terps took over the against the Fighting Irish towards the end of the first half.

On a night where senior leader Anthony Cowan Jr. was quiet after his big Thanksgiving in Orlando, the Terps were led a trio of sophomores in Jalen Smith, Eric Ayala and Aaron Wiggins. Maryland also received strong contributions from junior Darryl Morsell.

Let’s take a look at some of the standout plays from the big win.

Jalen Smith had his most complete game of the season

Smith has struggled throughout his Maryland career with his three-point shot, but against Notre Dame, “Stix” was on fire. Smith hit two of his three attempts from behind the arc and looked much more confident in his attempts than he has in the past.

This was a great play call by Turgeon to have Ayala and Smith run a simple pick-and-pop to get the big man an open look from three. Smith has been constantly working on improving his three-point shot to make himself a more well rounded offensive player, and it started to show with more consistency Wednesday night.

Smith did it all during this game and that included finding his teammates for open looks like he did on this play — one of three assists on the game for him. Ayala and Smith run a pick-and-pop, similar to the play later in the game that ended with a Smith three-pointer.

He receives the ball at the top of the key and makes a perfect bounce path to Cowan for the easy finish. Cowan made a textbook backdoor cut to ensure he would shake off his defender to get the open look.

The Baltimore native was not just a force offensively, he also got it done on the defensive end. Smith recorded a career-high five blocks in the win and showed his dominance on this block, pinning it against the backboard to start the transition break for the Terps.

Smith is now averaging 2.3 blocks per game on the season, which puts him fifth on the Big Ten leaderboard. He’s been strong all season defensively and has done a great job of clogging up the paint for opposing bigs.

He finished the game leading the team with 15 points and 16 rebounds —which is a career high as well — and the five blocks. It was his fifth double-double of the young season after reaching that number in the entirety of 2019-19.

Aaron Wiggins showcased his athleticism to the fullest

This was the play of the game for the Terps, and maybe the best play of the entire season to this point. Maryland closed out the first half very strong against the Irish, finishing it off with this monster putback slam from Wiggins.

Head coach Mark Turgeon drew up an inbounds play designed to get Wiggins a wide open three and it worked to perfection, except that the sophomore missed the shot. However, as his defender overcompensated and failed to box him out, Wiggins was able sprint to the bucket and finish the slam with ease to ignite the Maryland crowd and send the Terps into the half with a 12-point cushion.

The play blew up around the country, making Scott Van Pelt’s ‘One Big Thing’ segment, as well as the No. 1 play on SportsCenter.

Wiggins has struggled mightily with his three pointing shooting this season, going from 41.3 percent from beyond the arc a season ago to just 31.4 percent this season. But his aggressiveness in this game made up for the struggles, and he proved that here with the huge slam.

Wiggins not only made up for his poor shooting numbers with his aggressive play on offense, but also with his strong play on defense all season long. The North Carolina native has been a pest on defense throughout the year and proved it again with a three block performance against Notre Dame.

The Irish were able to get out in transition after a missed shot by the Terps, but Ayala and Wiggins were ready to make the stop on this play. Ayala played strong on ball defense here and Wiggins timed his jump perfectly to execute the big chase-down block.

Wiggins finished the game with 11 points, seven rebounds and three blocks — all of which were chase-downs. If Wiggins can get his shooting numbers back to where they were a season ago, combined with his aggressiveness on offense and strong defense, he will start rising up the NBA Draft big boards.

Morsell continued to prove how strong of a finisher he is against Notre Dame with this play midway through the first half. Donta Scott drives hard to the basket and uses great vision to find the cutting Morsell, who finishes the tough contested layup.

The junior has been strong all season with his finishes, but his ability to switch hands mid-air and finish the layup was extremely impressive.

Morsell has not only proved himself to be a great finisher, but also a worthy facilitator. On this play, he receives the kick out pass from Cowan and then drives hard to the paint with just one power dribble and a jump stop. As the defense converges on him, he finds a wide open Smith for an easy slam.

Morsell’s progression offensively over his three years with the program has been tremendous and is a testament to the work he has put in and the strong player development program from Turgeon and his staff.

The Maryland defense has been quite impressive throughout the start of the season, and this steal by Serrel Smith Jr. leading to points at the other end was another great example of it. Smith steals the ball, gets out in transition and delivers a perfect bounce pass around the Notre Dame defense to find Cowan for the easy finish.

Ayala had a great game for the Terps with 14 points, five rebounds and five assists, and this was the play of the game for him. The Terps played great defense on this play, closing out on every Notre Dame player, which led to a forced turnover by Ayala. Smith leads the break and finds his fellow sophomore for a huge slam that sent Xfinity Center into a frenzy.

Ayala has quietly been one of Maryland’s best players all season long, although his three-point numbers are down significantly compared to last year. His recent move to the starting lineup should help him maintain his strong play as the season moves forward.

Speaking of Ayala’s three point numbers, he did however have a solid game against Notre Dame, shooting 2-for-5 from deep. The Terps’ transition offense this season has been very effective and it showed on this play.

Ayala gets a rebound at the other end, kicks it up to Morsell and then spots up at the top of the key for an open three that finds the bottom of the net. The sophomore from Delaware was a catalyst for the Terps in breaking this game open, and this made three was right after he had two drives to the rim that resulted in made contested layups.

Ayala has hit very timely buckets often times this season for Maryland, and he did so again against Notre Dame to break open the game.