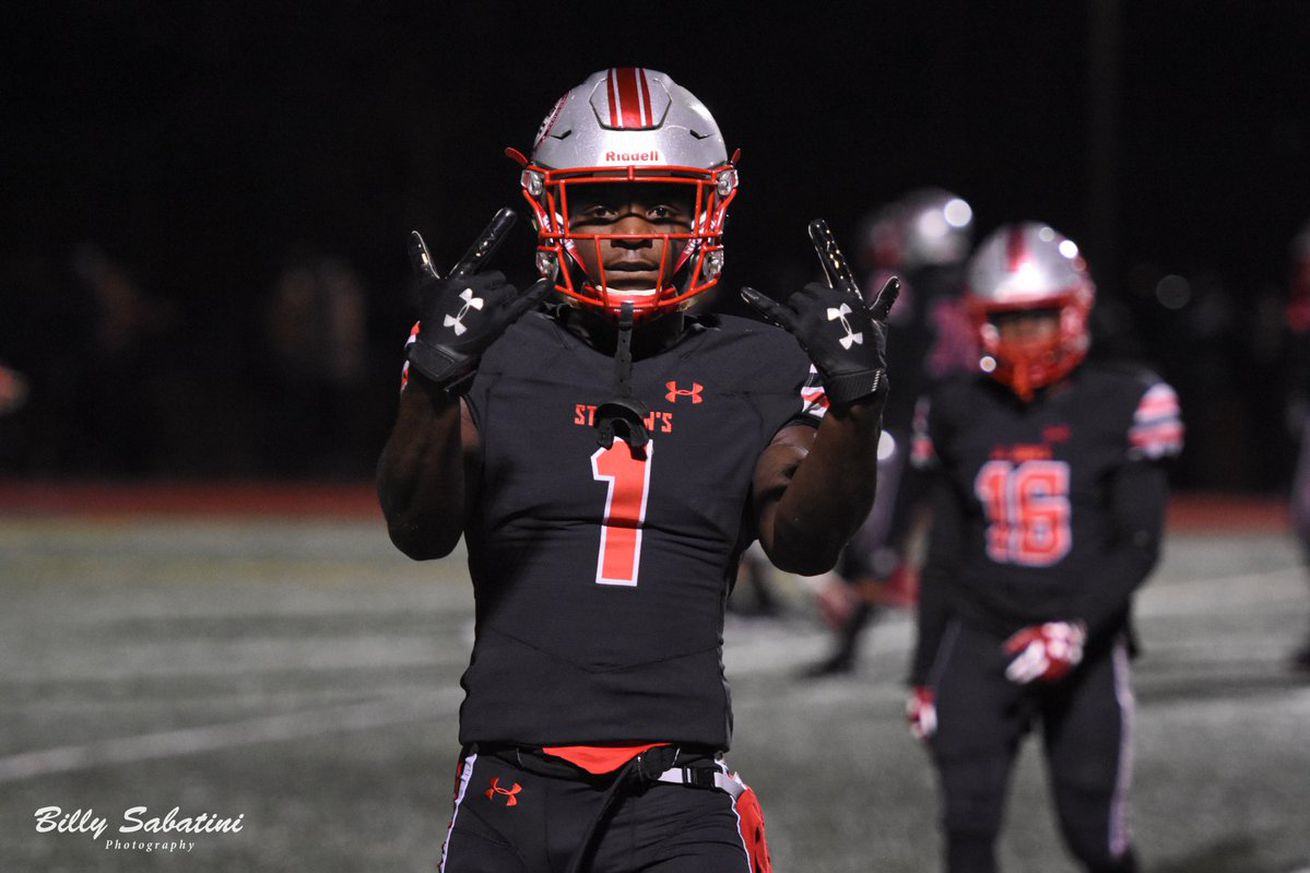 Inside Jarrett’s decision to decommit from LSU and sign with the Terps.

A few days before the start of the early signing period, five-star wide receiver Rakim Jarrett opened up Twitter and navigated to Stefon Diggs’ account.

Despite being committed to LSU since April, Jarrett wasn’t dead-set on heading to Baton Rouge for the next three to five years. Feeling a disconnect with the Tigers coaching staff in late November, the No. 20 player in the class of 2020 started weighing other options.

Knowing there was a chance he would wind up with Maryland football, he sent Diggs — one of the best receivers in Terps history — a direct message seeking some guidance.

“He just told me I got to start surrounding myself with people on the same focus as me,” Jarrett told Testudo Times after his decision. “And I got to be willing to sacrifice all the outside noise and focus on winning and doing what I have to do to make it to the next level.

“He shared some wisdom with me on how to work towards Maryland — how I needed to handle it, and what I need to do to kind of be a better player than he was, even though he was phenomenal when he did it.”

Diggs served as an idol to Jarrett, who as a kid in the DMV watched the current Minnesota Viking dominate on the outside for Maryland. To this day, Jarrett watches highlights of Diggs “all the time” as he lights up the NFL.

So when Jarrett was ready to announce his intention to sign with Mike Locksley and the Terps on Wednesday, he channeled his inner Diggs to break the news.

“What’s a better place to do it than your city.. see y’all in the fall. #Signed,” Jarrett wrote in the caption of his Instagram post, an ode to what Diggs said when he committed to Maryland back in February 2012.

What’s a better place to do it than your city.. see y’all in the fall. #Signed

Jarrett’s flip from LSU to Maryland came seemingly out nowhere to stun the nation. Locksley was among those shocked, as he was given no prior indication this was happening.

“We had no idea he was signing today, we had no idea that he was even coming to us,” he said at his Wednesday press conference. “And then all of a sudden, he puts out a tweet that says [he is] committed. And we’re like, ‘What is this?’”

The decision was still fresh to Jarrett himself, who didn’t decide on College Park as his future home until he woke up that morning.

“[Locksley] wanted to know if was going to sign to any school on this early signing period,” Jarrett said. “I said I’ll think about it and let him know once I find out, he’ll find out like the rest of the world found out.”

The entire process came together quickly, as Jarrett didn’t really consider Maryland seriously until he took an official visit on Dec. 6, less than two weeks before the start of the early signing period. When he came to College Park that day, he jelled with Locksley and his message.

“[The biggest impact] was moreso Coach Locks and the plan he presented,” Jarrett said. “How you’re going to develop me as a player and as a person and use my face to kind of brand myself even more than what I kind of do now in high school. How being in the hometown is a big thing, going further than just football.”

After his visit, Jarrett sought out second, third and fourth opinions on Locksley and how the two would mesh together at Maryland.

Jarrett went to Alabama wide receiver Jerry Jeudy — who thrived in Locksley’s system with the Crimson Tide — and others, trying to get as many thoughts as possible on how the coach’s process works.

“They always say that in the system he runs, he’s going to get you the ball,” Jarrett said. “Even other coaches in college, they have nothing but respect for Coach Locks.”

As impressed as Jarrett was with everything Maryland and Locksley, he still remained officially committed to LSU as National Signing Day approached. He tried to buy some time to make a decision, tweeting Monday that he wouldn’t sign a National Letter of Intent until February.

“To be honest, I think it was a lack of trust between the coaching staff at LSU and myself,” Jarrett said. “If I was going to go all the way to Louisiana, I would have to really trust those guys down there. If Coach Locks and his staff were at LSU, I probably would’ve went [there].”

When he woke up Wednesday morning, Jarrett decided to choose the group he connected with the most.

“He just knows what I feel,” Jarrett said. “It was kind of a true honor feeling between me and Coach Locks and the whole coaching staff.”

And despite the Tigers’ level of success this year — LSU is the current favorite to win the national championship — it didn’t matter to Jarrett all that much.

“I know all the hype and hoopla around the No. 1 team, but I don’t really look at that,” he said. “Because I committed before they were the No. 1 team.”

Moving from a perennial top-10 team in LSU to a program in the midst of a rebuild in Maryland may be a surprise to some, but it wasn’t an out-of-character decision for the talented pass-catcher.

When Jarrett made his decision to play high school football, he chose St. John’s, now considered a powerhouse program in the national landscape. But before he arrived, the Cadets weren’t the caliber of team they are now.

“I think the big thing for him is he’s a kid that loves challenges. He really enjoys doing things and building,” Locksley said. “He’s not a follower by any means. You win with guys like him. … Here’s a guy that believes in himself, that has some natural leadership abilities, the type of guys that we want to build our program with.”

Now with Jarrett in the building, he can be the face of a program potentially on the rise. He’s already on Twitter reaching out to other prospects, playing the part of recruiter to add even more value to his already sky-high stock.

“[Mike Locksley’s staff] can see the potential that if we go ahead and turn this thing around and get Maryland back to what it used to be, players are going to buy into it,” Big Ten Network analyst Howard Griffith said. “[The signing of Jarrett] to me is the biggest news of the day.”

Jarrett is ranked as the No. 2 receiver in the country per the 247Sports Composite, earning an overall grade of 0.9910. He’s Maryland’s best recruit since Diggs, who remains the highest-rated signee in program history.

Given his star status, there will likely be a lot of pressure on Jarrett from the moment he steps on campus. And while there are a lot of question marks regarding the rest of the team, Jarrett is committed to bringing everything he has to College Park.

“I can’t promise anything as a recruit [in terms of success], because I haven’t stepped on campus yet,” Jarrett said. “I just know what I’m going to do and how I’m going to give my all to the University of Maryland football team for however long I’m there.”