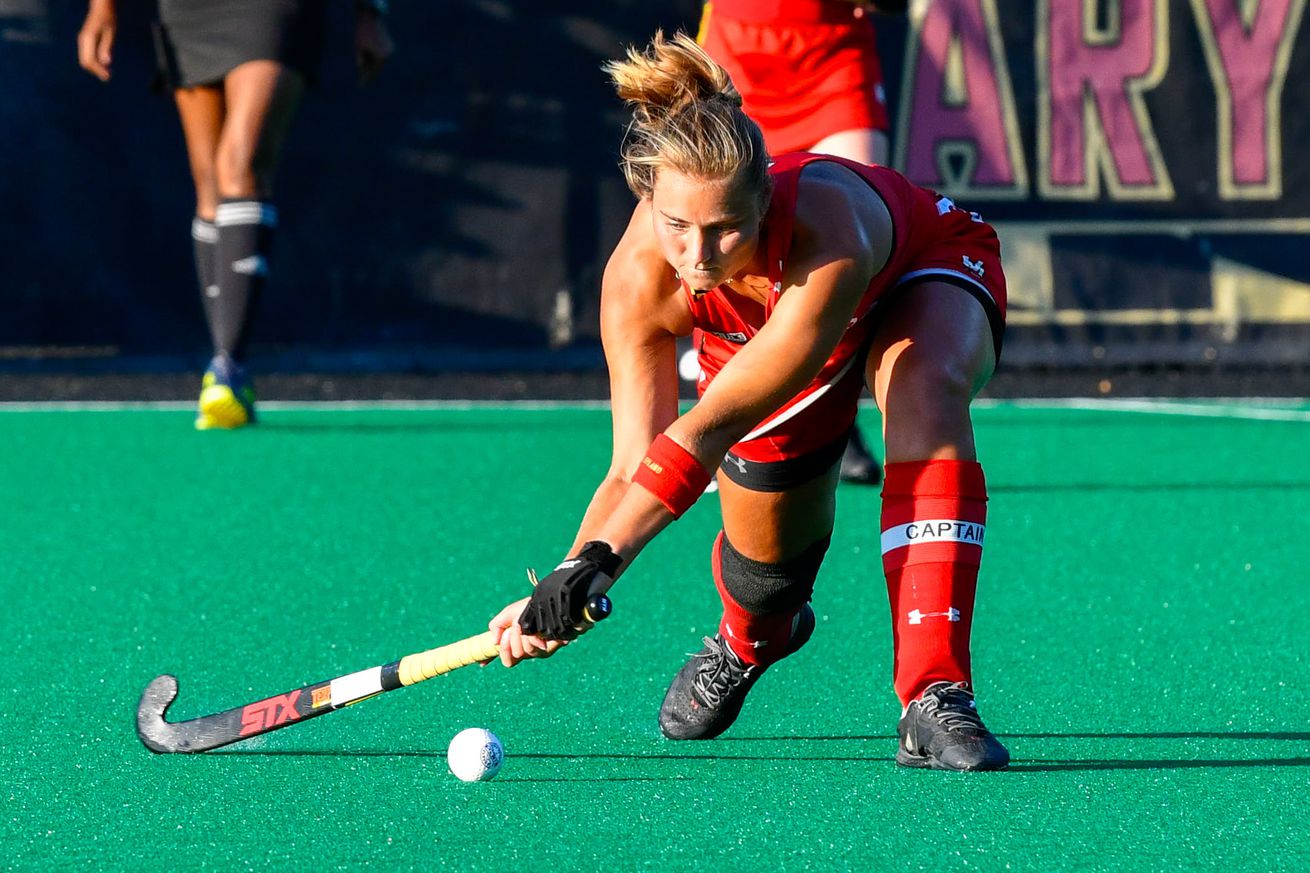 The Terps’ offense exploded for a quartet of second-half goals to advance to the second round.

In the 32nd minute, redshirt sophomore forward Mayv Clune crossed the ball into the middle of the circle, where a diving junior Brooke DeBerdine reached her stick out and poked it into the back of the cage.

DeBerdine’s goal shifted the tides after two scoreless quarters, propelling Maryland field hockey to find the back of the cage three more times en route to a 4-0 victory over Saint Joseph’s in the first round of the 2019 NCAA Tournament.

“We were off our game actually in the beginning,” head coach Missy Meharg said. “I thought Noelle just kept us in it and Bodil… They’ve been that rock all year and they kept us in it. We just needed to get together and make different pressing levels.”

Meharg’s program is no stranger to postseason competition, now in the tournament for the 25th straight year. And her Terps moved on to the second round for the fourth consecutive time with Friday’s victory in Charlottesville, Virginia.

Maryland’s offense was a major concern heading into this one though, after scoring just one goal in its last two matches — including an uncharacteristic loss in the Big Ten tournament semifinals.

But DeBerdine’s goal opened the gates for the Terps, who scored their most goals since Oct. 25 in the victory.

In the 40th minute, Maryland converted its second goal of the afternoon on a penalty corner. Senior defender Kelee Lepage inbounded the ball and passed it in to freshman Nathalie Fiechter, who set up senior captain Bodil Keus. She went for the bottom left of the cage, sneaking it into the corner for a 2-0 lead.

Just over 10 minutes later, the Terps went with the same strategy. This time, Keus sent the ball in the top right corner of the goal past the reach of Hawks’ senior keeper Victoria Kammerinke.

“I think Bodil did a great job today,” Clune said. “She’s been really focusing on her corners and it shows. She puts in the extra work outside of practices and it’s really showing.”

After that pair of penalty corner goals, Clune added a score in a one-on-one situation to extend the Terps’ lead to 4-0. After an offensive explosion in the second half, it was more than enough to advance into the quarterfinals of the NCAA Tournament.

“When you get a corner, especially against good teams, it’s so important to be able to capitalize,” Clune said. “I think what we focused on throughout our trainings, was just do the simple and to focus on that. When everyone does their part and everyone can just focus on the part that they have to do, we’ll be able to be successful.”

The Hawks came out of the gates early, but senior keeper Noelle Frost stood tall. In the fourth minute, Atlantic 10 Offensive Player of the Year Pepa Serrano brought it into the circle, but Frost blocked the early attempt. Five minutes later, Frost made a sliding kick save.

“It was just to manage a couple of key players,” Meharg said about the game plan. “[Serrano] is so crafty and it was really having a double team around her all the time, in the front and the back and channeling her into a funnel. I thought we did really well with that.”

The shots kept coming from the No. 1 offense in the nation. Hawks’ freshman midfielder Kacie Patton had a one-on-one opportunity as she raced into the circle against Frost. The senior keeper came out of goal, ran towards Patton and stuck out her left glove to shut down another Hawks’ opportunity.

Heading into the second half locked in a scoreless tie, the Terps came out looking like a different team to break out for the four-goal victory at the most important part of the season.

1. The Terps’ first round streak continues. After a surprising exit in the semifinals of the Big Ten tournament, the Terps looked to return to their old form. Maryland’s offense looked a lot more fluid in this matchup against the Hawks and it showed on the scoreboard. This win continues a streak of four consecutive first round victories in the NCAA Tournament. The Terps will play the No. 3 seed Virginia Cavaliers, on Sunday.

2. Maryland’s defense shut down the No. 1 offense. The Saint Joseph’s Hawks offense has been the best in the country this season, averaging four goals per game. However, the Terps defense, which has been the second best in the nation, stepped up.

Senior keeper, Noelle Frost had a great performance in the cage, coming up clutch throughout the game and recording five saves. This was the first time all season that the Hawks have been shut out.

3. Hannah Bond was stretchered off. In the 35th minute, the Hawks were awarded a penalty corner to try to tie things up. Off the corner, the ball was lifted off the ground towards the goal, but it hit junior defender Hannah Bond in the head.
The junior fell to the ground and was quickly attended to by the training staff after she began bleeding. Bond was later stretchered off the field. The status of Bond is unknown, but it could be a big loss as she is one of the key pieces of Maryland’s backline defense.

“We just all knew, we didn’t even have to talk about,” Clune said. “This is for Hannah. Let’s play as hard as we possibly can.”