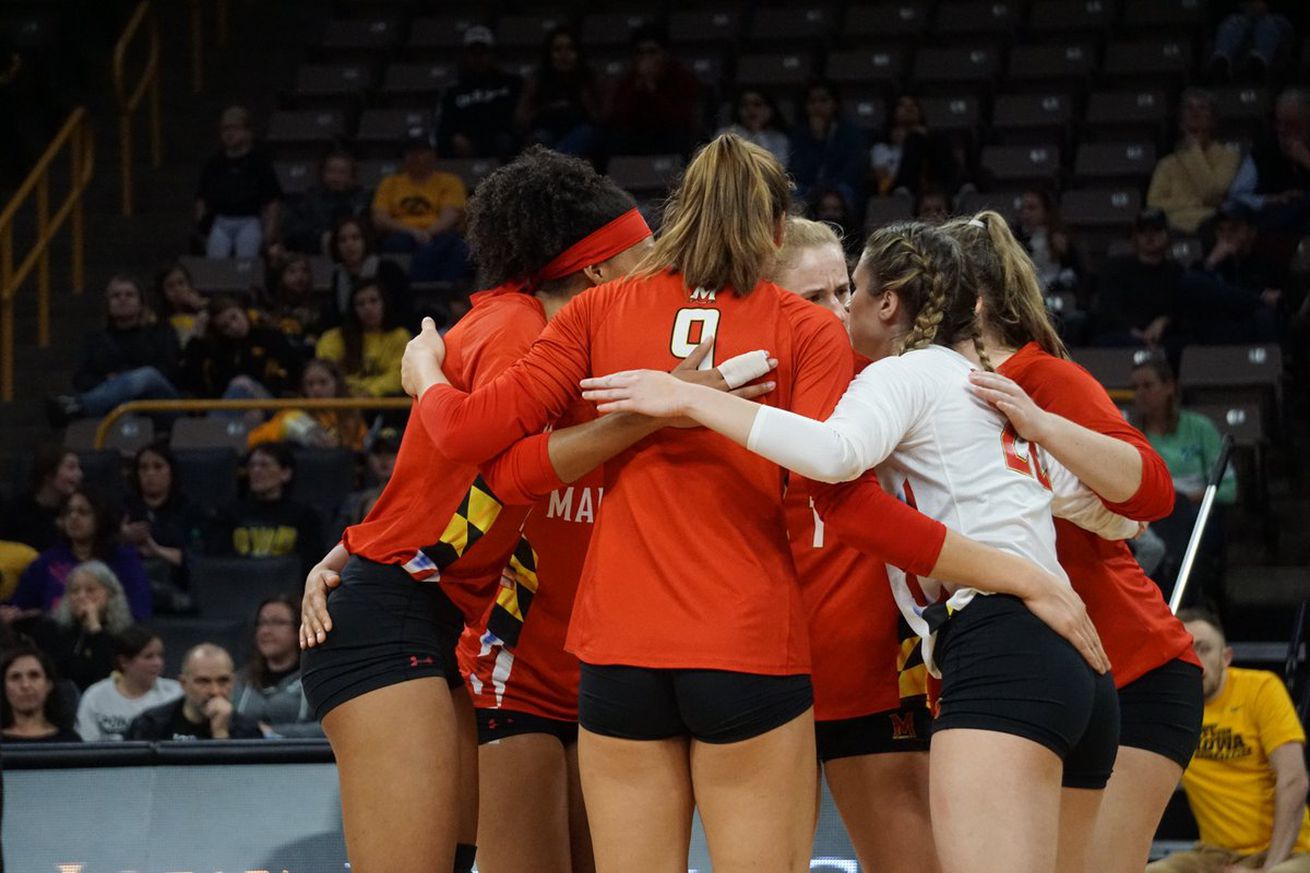 The Terps finish the year with just a 5-15 record in Big Ten play.

Maryland volleyball had just tied up No. 6 Nebraska at the Devaney Sports Center in Lincoln, Nebraska, 14-14 in the first set after Katie Myers landed her first service ace of the match.

The Terps were surprisingly keeping pace with the Huskers, who had struggled to that point in the match with serving, committing four service errors.

Myers, ready to serve again, missed Nebraska’s service box for her second service error of the set and 82nd of the season, already 17 more than last season.

Maryland had one match left to salvage the season, but the Terps (13-19, 5-15) fell short against Iowa (10-21, 4-16) despite taking the first set comfortably, finishing the season on a three-match losing streak.

“I was disappointed for them that I wasn’t able to put them into a better situation,” head coach Adam Hughes said. “We need to keep going as a program and while this season is officially done, the clock has started for next year and every day matters.”

After losing eight matches against ranked opponents, Maryland had one last chance to cause an upset against No. 6 Nebraska Friday night.

The first set remained close to start, thanks to sloppy play from the Cornhuskers. Six of Maryland’s points in the first came via Nebraska service errors — the Cornhuskers had eight in the first two sets of the match. But the Terps couldn’t take advantage of the opportunity in front of them, allowing Nebraska to hit .292 and go on a big run to take the set.

From there, Maryland was completely out of it with a faltering offense, taking a straight-set loss to finish the season 0-9 against ranked opponents. The Terps failed to win a set against a ranked team since taking then-No. 8 Penn State to five sets on Oct. 11.

“Something that we’ve really been focusing on is our first touch. We’ve put a lot of emphasis on it in practice, and this game was against one of the best serving teams in the Big Ten,” junior setter Nicole Alford said. “With the injuries, there’s been a lot of changing up of lineups and different people so it was really hard to ever find a rhythm.”

Maryland came in as the second-worst attacking and assisting team in the Big Ten, averaging 10.53 assists per set and 11.24 kills per set.

Facing a Huskers defense allowing a conference low .151 opponent hitting percentage, the Terps couldn’t generate offense, even in the first when the Huskers were sloppy. Maryland hit .087 in the set, recording eight kills.

And while the Terps never did, the Huskers rebounded, hitting .382 the last two sets of the match. They were led by three players — Madi Kubik, Lexi Sun and Jazz Sweet — who recorded a combined 29 kills in the match.

Maryland finished the match hitting .167 with improvements in each set, but two 4-0 runs in the second and one 5-0 run in the third allowed Nebraska to separate from the Terps.

“They scouted really well and were in the right spots,” Myers said. “I mean we communicated the different shots that we had open, but I think they were just really scrappy.”

Following Iowa’s second service error in the first set, Alford landed her first service ace, allowing Maryland to re-take the lead after being up by eight points.

However, it looked like that slight lead was about to go away as her next serve led to a big kill from Courtney Buzzerio that was too much for Alford to handle.

Behind her was Maddie Naumann, who dove to save her shot. Her effort gave Maryland the point and extended an eventual 9-0 Terp run that secured a first set win. But Maryland did not win another, losing to Iowa in four sets.

“I don’t think we could find much of an answer. Their passing was better than we expected,” Myers said. “Give credit where credit’s due. They played really well.”

The service game was Maryland’s key to success from the start, recording five in the first set. Pritchard led the charge with four straight to give the Terp an early 8-3 lead.

Maryland’s success ran out in the second set as the Terps hit .000 to Iowa’s .258. Iowa’s Kyndra Hansen and Amiya Jones were big sparks for the Hawkeyes, hitting .444 with 23 total kills over the match. The duo helped lead Iowa to a 15-6 run to take the second, shell-shocking the Terps.

The Hawkeyes carried over their success into the third set, quickly going on a 7-1 run. And though the set remained close, Iowa had the slight edge throughout thanks to its early dominance.

“It came down to who could control the ball better,” Alford said. “I think that Iowa controlled it really well and they were able to run their offense and execute at a pretty good level.”

The Terps were once again doomed by Iowa runs in the fourth set, allowing their opponent two 7-2 runs to finish them off. The Hawkeyes finished the match hitting .405, and the team recorded with 47 kills in their last three sets, including 18 in the fourth.

“They were able to slow us down in the serve-receive. We weren’t able to dictate the terms as much,” Hughes said. “They had a pretty good offensive night from their two outsides and we couldn’t find a good answer for it.”

1. Erika Pritchard and Rebekah Rath had bounce back games against Nebraska. Just under a week from her worst match of the season that included only five kills and an -.081 hitting percentage, Pritchard had a much better performance against the Cornhuskers. The junior outside hitter notched 12 kills, marking the 13th time she has recorded double-digit kills against a Big Ten foe. Nine of Pritchard’s kills came in the third and final set.

After failing to record a kill against Nebraska on Oct. 19, freshman outside hitter Rebekah Rath finished Friday’s match with seven kills, which was the second-most on the team.

2. Maryland finished the season on a massive losing skid. Through seven matches in conference play, the Terps were 3-4, still in contention to have a good season. However, in its last 13 matches, Maryland went 2-11, including two five-match losing streaks.

3. The Terps failed to take advantage of set one against Iowa. Maryland used two big runs and five service aces to take the first despite recording nine kills. However, 16 total errors in the next two sets switched momentum into Iowa’s favor, leading to a four-set Hawkeye win.